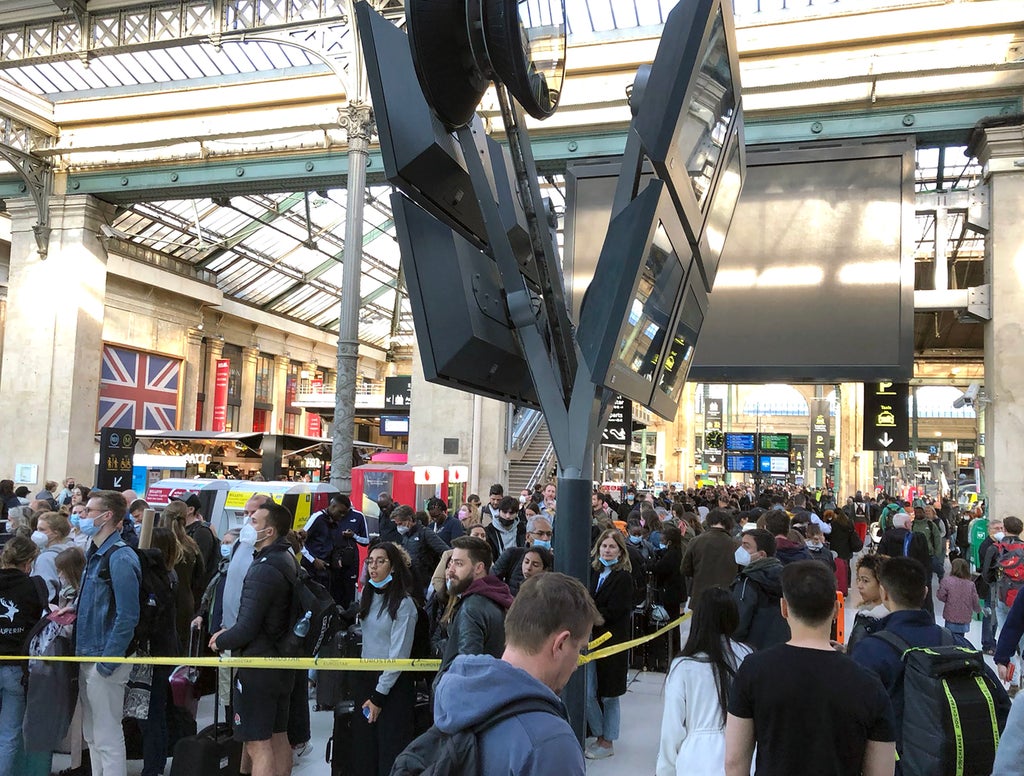 Travelers have faced “nightmare” queues and canceled flights as millions looked to return from bank holiday trips away.

Rail and air passengers have been hit by delays on Easter Monday as staff shortages, technology issues and planned engineering works caused more disruption on the final day of the long weekend.

Those traveling by car have also been warned they could face longer journeys than usual as more than 3 million people were forecast to hit the roads.

Others returning to the UK from Gare Du Nord station in Paris faced delays after a border control IT failure stopped passengers from boarding trains on Monday morning.

Charlie Daffern from Cheltenham said: “It’s a nightmare here. We have been standing in the queue for check-in/security for over an hour and a half. Probably another hour to go.”

The 36-year-old added: “People are becoming very restless and some people panicking as they have flights to catch from Heathrow this afternoon.”

Loic Kreseski said “hundreds and hundreds” were in queues at the station on Easter Monday.

The 25-year-old from Hackney said: “People are upset due to the delays and the fact that you have to stand still for hours. It’s very upsetting when we know the price of the tickets.”

Network Rail said around 5 per cent of the railway would be affected by the hundreds of projects going on over the Easter weekend. This has included the four-day closure of the West Coast Main Line between London Euston and Milton Keynes.

For those traveling by plane, staffing pressures have led to canceled flights, diversions and long queues at airports on Monday.

More than 1,000 passengers due to touch down at Gatwick in the early hours of the morning had their flights diverted after the control tower was closed because of staff shortages caused by sickness.

A Gatwick airport spokesperson said: “A small number of late night flights were delayed, canceled or diverted due to staff sickness impacting the night shift in the airport’s control tower.

“Gatwick would like to apologize to any passengers affected by this disruption. The control tower and the airport were operating again as normal from 5.30am.”

At least 20 flights between Scotland’s three biggest airports and London have been canceled by British Airways and easyJet. Ten have been grounded to and from Glasgow, eight serving Edinburgh and two to and from Aberdeen.

British Airways has grounded a further 52 European departures to and from Heathrow, while easyJet has canceled Gatwick services to and from Nice, Milan and Ibiza.

Both airlines blame high levels of staff sickness. Since the start of April, British Airways has canceled more than 1,000 flights while easyJet has grounded more than 500.

Passengers at Manchester, Heathrow and Gatwick airports have also contended with long queues.

It came after weeks of chaos at UK airports involving lengthy waits and misplaced bags.

Those traveling by car were also warned of delays on Monday, with the RAC forecasting nearly 4 million drivers on the roads on Monday.

P&O Dover-Calais ferries have also been suspended across the whole Easter weekend.