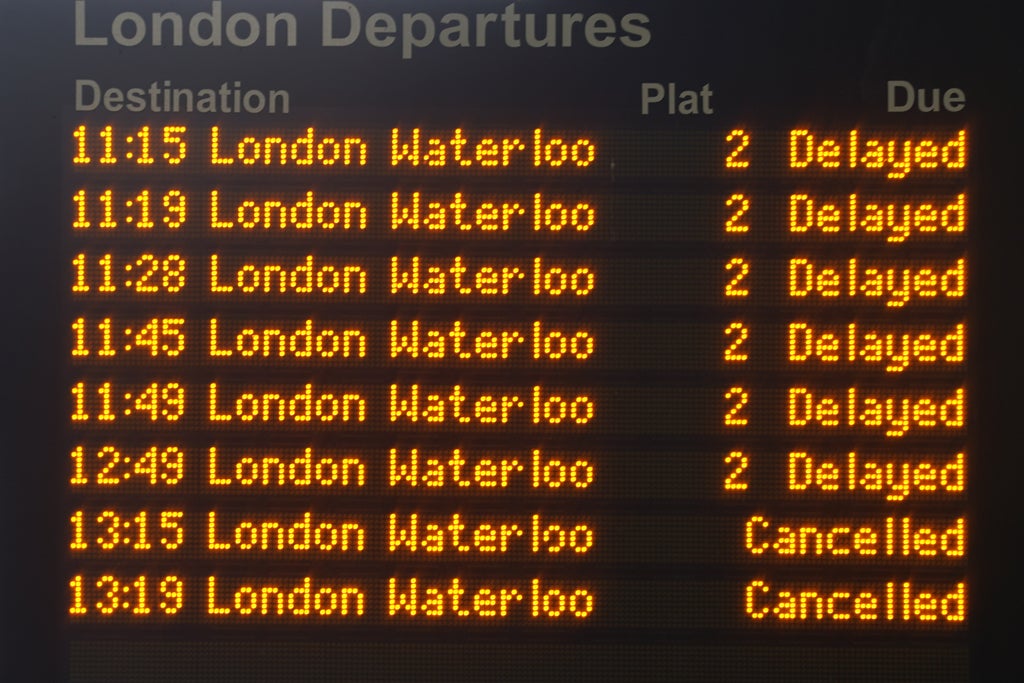 Plans are struggling to land at airports due to high winds, with several being diverted or requiring several attempts before touching down.

Aviation analytics firm Cirium said at least 436 flights due to take off or land at UK airports were canceled on Friday.

The highest proportion was at Heathrow, where 20% of flights were cancelled.

Passengers on easyJet flight EJU8014 from Bordeaux to Gatwick endured two aborted landings before the plane was put in a holding pattern over the south coast and then forced to return to the French city.

It touched down back at its starting point more than three hours after it departed.

The airline told passengers this was due to “poor weather conditions in London Gatwick, which are below safe operating limits”.

British Airways flight BA296 from the US city of Chicago was due to land at Heathrow but was diverted to Geneva, Switzerland.

The airline said: “Due to the extreme weather conditions across the UK and resulting restrictions on the number of aircraft that can take off and land each hour, we, like other airlines, are experiencing significant disruption.

“We’re operating as many flights as we can and putting on larger aircraft where possible.”

Train services are suffering major disruption due to Storm Eunice with trees and other objects blocking tracks across Britain.

No trains are operating in Wales for the entire day.

See also  Ukraine-Russia conflict: 'We are the lucky ones', says Scot who fled Ukraine with his family

Network Rail closed all routes in Kent, while every line in south-east London was blocked by trees.

Many journeys were already delayed as the organization implemented widespread emergency 50mph speed limits before the bad weather arrived to make it easier for train drivers to brake.

Transport Secretary posted on Twitter: “If you can, please stay home and rearrange journeys for another day.”

Both the M4 Prince of Wales Bridge and the M48 Severn Bridge – which link England and Wales across the River Severn – were closed due to high winds.

This caused frustration for thousands of motorists.

A spokesman for the Severn crossings said: “We understand the effect a dual bridge closure has on people wishing to travel.

“This is an extremely rare event for us. We have staff out in this storm ensuring action is taken to keep road users safe and they are being abused for it.

Traffic Wales, the Welsh Government’s traffic information service for motorways and trunk roads, warned that “many HGVs are ignoring the safety advice on Britannia Bridge”.

The bridge, which connects the island of Anglesey with mainland Wales, is closed to all traffic except cars and car-derived vans.

The RAC said the number of call-outs to broken-down vehicles was lower than normal, indicating that many people were “taking the weather warnings seriously and not setting out”.

It added: “The fact many roads are so clear is a sign that today is not a safe day to be driving.”

Transport for London urged people to avoid non-essential journeys in the capital.

A spokeswoman said: “We are doing all we can to ensure we are prepared for any impact, with extra staff ready to respond quickly to any incidents, but some services will be affected by the extreme weather.

“We are also urging Londoners to please take care if they travel around the city.”

A spokesman said: “We expect this to be the case for most of the day and we will provide further information when possible.

“We strongly advise our customers not to travel to the Port of Dover today.”

Several ferry services due to sail across the Irish Sea were cancelled.

In Dorset, the Sandbanks ferry between Poole and Studland was suspended.