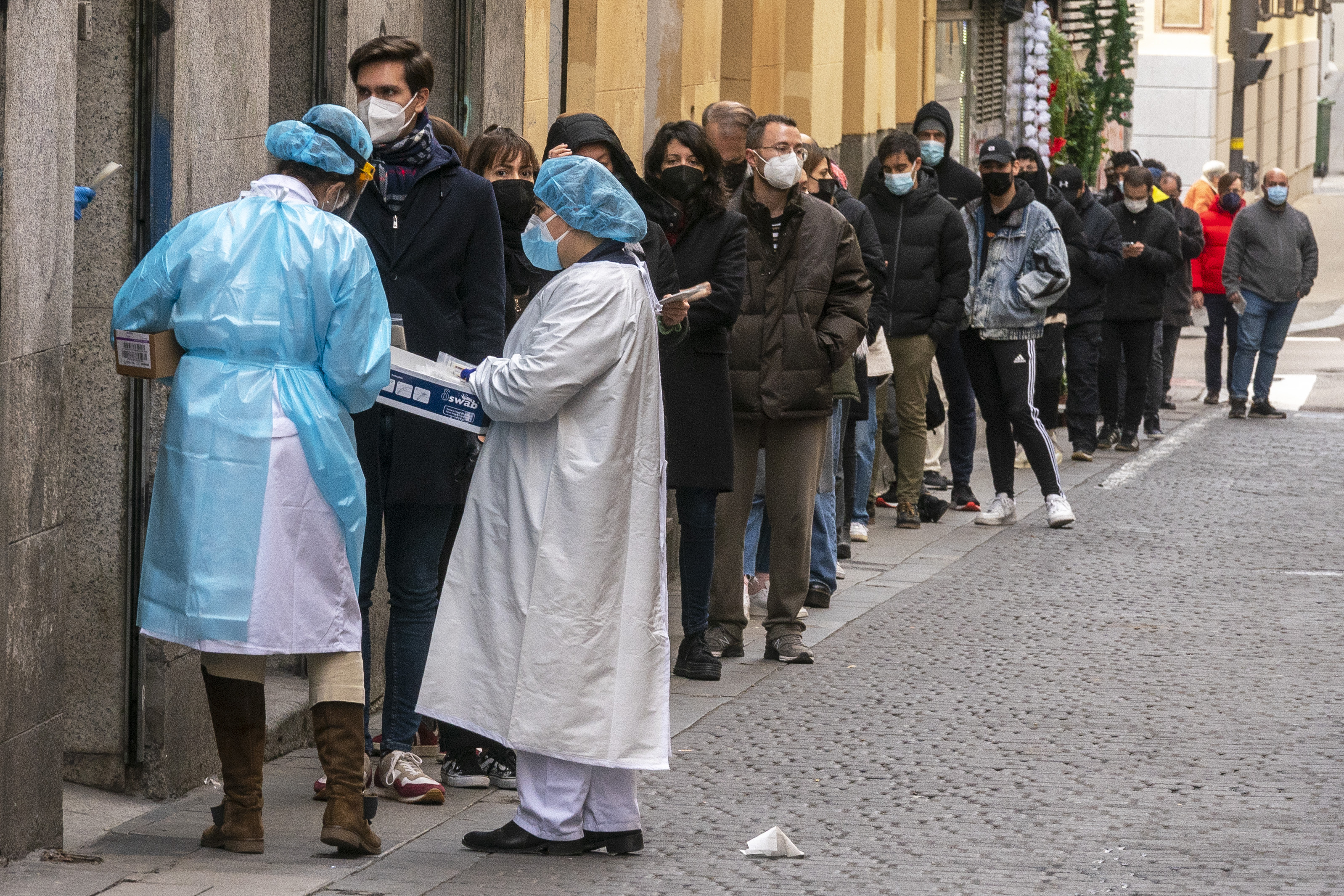 The explosion of infections in the sixth wave of covid once again puts the case and contact tracking system on the ropes. Trackers are overflowing and citizen service telephones saturated. They can’t cope. “One hour after the end of the duty shift we have 12,000 calls to make to close contacts,” exemplifies a Catalan tracker who prefers not to reveal her name. This means 12,000 people who would have to be summoned for a diagnostic test and recommended to keep isolation or avoid encounters with people at risk. But there was no time. And the virus, meanwhile, continues to circulate. The saturation of the system is such that Catalonia has already announced that, as of this Thursday, all close contacts will have to quarantine for 10 days, regardless of whether they are vaccinated or not, and they will not be tested unless have symptoms. As in a domino effect, telematic access to the health system is slowed down by the flood of cases and the demand is transferred to the doors of primary care and emergencies, which are already warning of the collapse.

In just one month, the incidence in Spain has increased fivefold: 609 cases per 100,000 inhabitants this Monday, almost 400,000 more infections than four weeks ago. This means an average of about 800,000 close contacts that the system has had to follow – according to the Carlos III Health Institute, the average number of contacts identified as positive is two. But the trackers, who track cases from primary care, public health or a kind of call centers enabled for the pandemic, according to the community, they do not reach everything. “Every day we have 12,000 contacts to call, people who do not know what to do, who are waiting for us to tell them what the protocol is,” laments the Catalan tracker. According to the Generalitat, there are 1,045 personnel in public health – which will be expanded to 1,400 – and 1,136 in primary care dedicated to tracking cases and contacts, and “connects with seven out of 10 contacts in less than 48 hours.”

However, the saturation of the system has already forced the Government to modify the protocols, explained this Monday the Secretary of Public Health, Carme Cabezas: “When the number of cases increases so much, it is necessary to adjust and make sure that what is essential The system can be done: that this tracking reaches the vulnerable people in the system, such as residences, pregnant women … I am focusing the tracking on that ”, he justified. If the control calls had already been reduced to close contacts, now they will stop testing, unless they show symptoms, and they will have to quarantine for 10 days. Calls to 061 for covid exceed 5,000 a day.

In Aragon, where the tracking is done from primary care, 18 nurses and 19 additional social workers have been hired, in addition to having the support of 20 military trackers: the community is monitoring more than 12,000 people, almost triple the number three weeks ago, although far from the 24,300 that came to follow a year ago. The Ministry of Defense has activated about a thousand soldiers to carry out tracking tasks in the different communities and has another 250 about to join.

Navarra also admits that there is a situation of “tension” due to the increase in cases and, although the tracking professionals have increased to 140, the community is reviewing the action protocol. “The possibility of including computer tools that would allow citizens to provide directly, through them, the contacts to the tracking team is valued,” a spokesperson indicated. In the Balearic Islands, where the volume of calls to the covid telephone has risen to 2,000 a day – there were 1,300 before the rise of the sixth wave – the Educacovid protocol has also been modified and children who are close contacts are tested for antigens instead of PCR . Murcia has also reinforced last week with 36 more trackers and next week, another 24, up to 290.

The demand for attention is intensifying and the phones don’t stop ringing. In the Canary Islands, only in these first 15 days has the total number of calls for the previous month been exceeded with 25,835 queries to the covid line. The Basque Country, which has 580 trackers, also admits a large increase in calls by covid to enabled phones, although it does not specify figures. The counseling will update the action protocols and those people who test positive in a diagnostic test will be asked for a list of their close contacts: these people, without waiting for the call from the tracking network, will receive an SMS with the appointment to make a test in Osakidetza.

The collapse of the tracking system, however, has an impact on the front door of the health system: primary care. There are queues at the doors of health centers and it is difficult to make an appointment for a test. A neighbor of Moralzarzal, in Madrid, reported yesterday that last Tuesday her son tested positive, on Friday they called him to locate his close contacts and she, who lives with him, was summoned for this Monday: when he arrived at the health center ” There were 50 people in front and in the street waiting for the test ”. In other cases, such as that of María (not her real name), a resident of Madrid, her contact with a positive was last Tuesday and she spent several days trying to get an appointment for a diagnostic test: “They put a little music on me and hung up on me. 15 times calling, ”he recalls.

Antònia Raya, nurse at the Raval Nord health center in Barcelona and vice president of the Catalan Forum for Primary Care, warns that the overload is very great: “People come because someone has told them that it is positive. Don’t wait for them to call you. It comes directly ”, he points out. And he warns that assistance resources, also tracking, are limited: “The resources are not what they should be and Public Health also collapses.”

Primary care is saturated, warns José Polo, president of the Spanish Society of Primary Care Physicians: “Many of the tracking devices had been relaxed and now we are in a hurry and people are protesting. It seems that we do not want to pick up the phone, but we are talking on another line or with a patient in the office, “he explains. Now they have to attend to all those who have taken a self-diagnosis test to confirm the result – the Health protocol says that a positive self-test has to be confirmed with another diagnostic test in a health center – and, in addition, there is a lot of respiratory pathology seasonal: “That forces us to make differential diagnoses, that is, many tests, which take time and delay us a lot,” laments Polo.

Reyes Machuca, a nurse at the Castilleja de la Cuesta health center in Seville, knows all the healthcare pressure of the collapse of the tracking: since he passed the Constitution Bridge, there are days that he only dedicates himself to tracking close contacts of patients who have tested positive. “The increase in tracking work has been exponential since the end of November and after the bridge it has exploded tremendously,” he acknowledges and must also combine this task with the rest of the ordinary activities of primary care.

Until November 1 it was a call center with hired professionals ex profeso Those who were in charge of locating those who had been related to infected persons, but since then, as the cases have decreased, these functions have returned to the nurses of the management units. “At the beginning everything was going well, because we skipped one, two, three cases at the most, but now it is almost unaffordable,” he says. As an example, this past weekend in the center of Castilleja 49 positives were treated and the antigen tests were exhausted. The time that Machuca invests in tracking each positive varies between the 10 or 15 minutes involved in cases of close contacts who have been quarantined and barely exposed, and those who acknowledge that they have been to a family lunch or dinner. “In those cases you can stay up to an hour or more, because it implies that they have been related to 10 or 15 people and you have to call them all, confirm that they are really close contact, summon them to do the PCR, or submit them to a test of antigens if they present symptoms … “

To this telephone work we must add the increase in face-to-face consultations about possible COVID infections that have not stopped rising in recent days. “Many who have been in close contact with a positive person go personally to the health center and do not wait to be located, also those who have tested positive in the pharmacy come. More telephone consultations with primary care physicians, which have also increased ”, he points out. In order to cope, their colleagues take advantage of the shifts on duty to speed up the work and there are even colleagues, confined by covid, who lend a hand from their homes.

The saturation of telematic services and difficulties in accessing primary care also ends up affecting the level of care that never closes: hospital emergencies. Tato Vázquez, president of the Spanish Society of Emergency and Emergency Medicine, warns that there is “a lot of saturation and a lot of overload” in his service: “Patients know that they will be treated there. They may have to wait, but a doctor and a nurse will see them. At other levels of care they are giving appointments with very long delays and trying to manage the demand over the phone is not easy. In the emergency department we are eating up the organizational problems of other healthcare models ”, laments the specialist. The emergencies are “full to the brim”, he explains and is the easiest resource when everything else collapses: “When the demand is insistent, it is the easy measure: ‘Go to the ER and they treat you,” he says, but warns of that the staff is “tired and frustrated” because they are not even recognized for the emergency medical specialty that they have been demanding for so many years.

The shortage of tests in pharmacies is also affecting the entry doors to the system, regrets Lorenzo Armenteros, a doctor at a Lugo health center and president of the Spanish Society of General Physicians: “Appointments for tests and that makes people go to the primary care emergencies ”. There are even those who use the picaresque, he warns, that overloads the test: “Yesterday a whole family came who said they had symptoms of covid to take the test and when we called them to explore and visit them, they left because they did not want to enter the health center ”, he relates. They just wanted to take the test. They may not even have symptoms, he explains. The proximity of the Christmas holidays and the anguish about taking the tests encourages these situations.

Armenteros claims “specific places to take tests outside health centers.” For Mario Fontán, spokesman for the Spanish Epidemiology Society, “the main problem is that there is such a volume of mild cases that the level of care, monitoring and bureaucracy are unacceptable by the system.” “There is a feeling of general lack of control because there are many people who need to confirm their clinic and have a sick leave. But a feeling of greater chaos is being generated than the clinical severity requires, ”he laments. The expert urges differentiated circuits, outside of primary care and emergencies, to centralize the care and follow-up of mild cases, their diagnostic tests and their absence from work.