Pensioner Iris Jones, 82, from Weston-super-Mare, Somerset, and her Egyptian lover Mohamed Ibriham, 36, married in November 2021 before he moved to the UK on a spousal visa

A pensioner who married a man 46 years younger than her has told naysayers to “get a life”, while her toyboy told them to “go to hell – f*** you”.

Iris Jones, 82, from Weston-super-Mare, Somerset, regularly speaks openly about her relationship with Egyptian partner Mohamed Ibriham, 36 – including their antics in the bedroom.

But when her husband had to return back home recently due to a family illness, she said trolls began spreading rumors they had separated.

The couple have faced a backlash from some who believe Mohamed married the much older former cleaner in order to get a spousal visa to come and live in the UK.

And after rumors started flying following their brief parting, Iris and Mohamed took to YouTube to tackle the issue head on.

Mohamed said: “Some hitchhikers say we are separated or divorced, they say it on social media.”

Iris added: “They are very misguided, they don’t know their a*** from their elbow.”

The straight-talking pensioner shot to fame in January 2020 during an interview on ITV’s This Morning, in which she told hosts Holly Willoughby and Philip Schofield intimate details about her active love life.

This included how she’d used an entire tube of KY Jelly lubricant when the pair first got intimate.

She and Mohamed then married in Cairo in winter 2021.

The couple had been separated for a year during the Covid pandemic, with Iris saying: “The heartache is unbelievable.”

“I miss Mohamed so much, I just want him with me in the UK.” 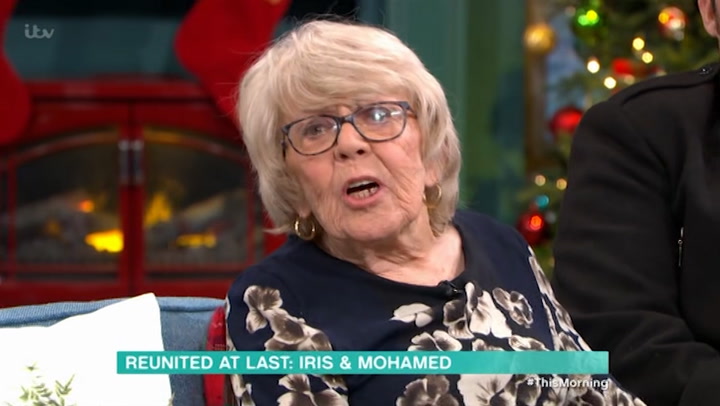 “If he didn’t get a visa it would feel like the end of the world. It’s like he’s dead but he’s not dead — just missing.”

Mohamed added: “I miss my Iris so much.”

They met on a Facebook group exploring atheism in summer 2019 and met in person for the first time that November when mum-of-two Iris flew out to Egypt.

Mohamed worked as a welding inspector at the time, but gave up his job to spend time with Iris when she came to Cairo.

The pair live in a bungalow in Weston-super-Mare
(

He was living in a three-room house with his parents, two sisters and brother.

Iris gets by on a £200-a-week pension and disability benefit.

She previously said she hopes trained engineer Mohamed can get work at Hinkley Point power station.

Pensioner, 82, overjoyed as Egyptian toyboy, 36, finally gets visa and moves to UK