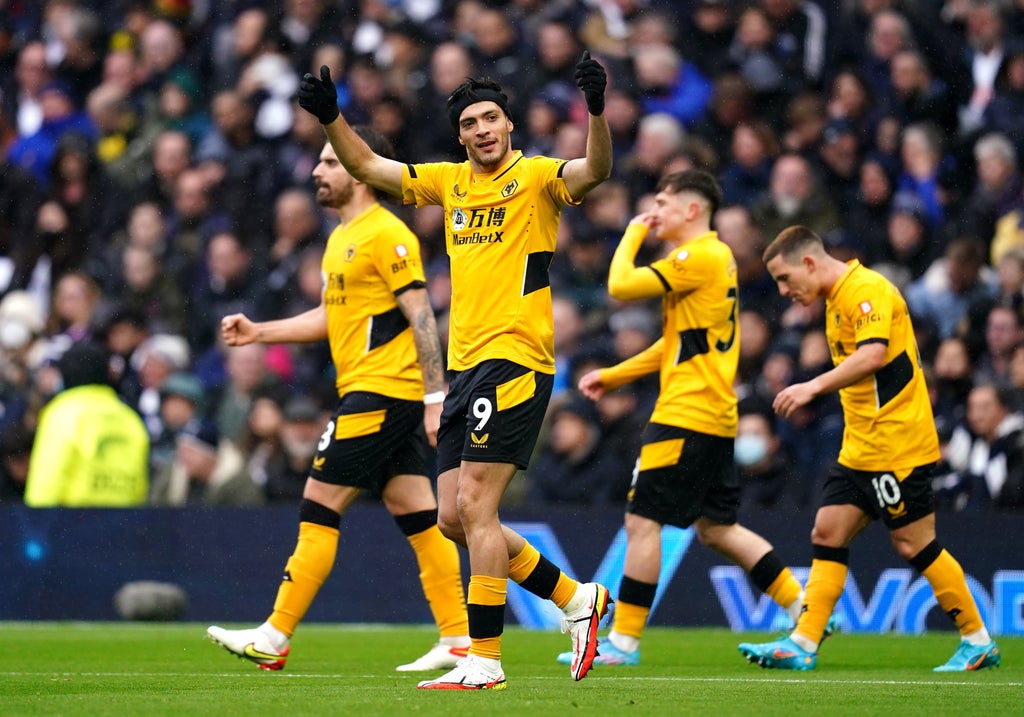 As the rain fell on Antonio Conte during this miserable defeat to Wolves, two thoughts would have drifted across the Italian’s mind. One, which is a not a new realization, is the scale of the task he faces to turn Tottenham into a side that looks even remotely capable of finishing in the top four, and two, that when things really go wrong at Spurs they invariably do so in spectacular and calamitous fashion.

Bruno Lage’s impressive Wolves side are now just two points behind Tottenham in the Premier League table but in truth, they did not require anything special to claim three points. Instead, they were gifted two opening goals that bordered on slapstick.

As Tottenham’s top-four bid suffered a damaging blow, it would have done so to the tune of laughter to those other sides in contention for the Champions League places.

The damage was done early on. Hugo Lloris’s bizarre attempt at a double save led to Raul Jimenez opening the scoring in the sixth minute, before Leander Dendoncker’s second was even more shambolic. It led to early boos from the home fans, an even earlier first-half substitution and formation switch from Conte, and a disspiriting afternoon for Spurs that saw them lose their third Premier League match in a row and a second at home in a week.

Conte’s side were in need of a response after they were pressed into submission by Southampton in midweek, but against Wolves they again came up against a side who showed far greater intensity and understanding of their tactical approach. It does not reflect well on Spurs, or indeed Conte, that it is also the third Premier League game in succession in which they have been outcoached.

Of the three changes Conte made from his team that surrendered a lead against Southampton, two were at wingback. Emerson Royal was a more popular absence than Sergio Reguilon, and in came Matt Doherty against the side and in the position he thrived at before his move to Tottenham, Ryan Sessegnon was handed a rare outing.

It lasted all of 28 minutes, however, after an opening spell from the hosts that will take some beating as the poorest from a Premier League side this season. Wolves were hungry, and it was not difficult to smell the hesitancy and vulnerability emanating from Spurs. They showed an alarming lack of urgency in and out of possession and ambled their way into a two-goal deficit. From a Spurs perspective, both were the sort of goals that you might concede on a lazy Sunday afternoon – it was certainly not the certainty in defense that you associate with Conte.

A free kick was cleared only as far as Ruben Neves and it was remarkable that a player with the Portuguese international’s eye for a long-range goal that he was allowed to shoot by the Spurs defence. Lloris punched the shot straight into danger but had a chance to redeem himself when Dendoncker’s effort was hooked goalwards, only for the Spurs captain to flap again. It fell to Jimenez who made no mistake as he volleyed a shot with his laces into the far corner in six minutes.

It should have shocked Spurs into life but Wolves’ second was as erratic a goal as Conte had perhaps ever conceded as a head coach. But this is Tottenham, and the way Conte’s side unraveled after Lloris almost passed the ball straight out for a corner was almost comedic.

Ben Davies hurried to collect Lloris’ wayward pass only to clear straight to Dendoncker, who slipped in Nelson Semedo on the right. Daniel Podence’s shot hit Davinson Sanchez, deflected off Rodrigo Bentancur and onto the post, as Dendoncker followed it in to put the visitors two goals up. For Bentancur, who was making his first start since his January arrival from Juventus, it was an early introduction to the Tottenham way. This does not usually happen at other clubs.

Further chances came, usually from Tottenham’s own self-inflicted making, but Wolves deserve credit too for knowing where and when to press and remained confident that they could reap the rewards. Spurs again cleared straight to Jimenez who saw a volley saved by Lloris, before Harry Winks passed the ball straight into danger and the Frenchman had to stoop low to deny Podence.

Conte was already preparing his first substitute as the first boos could be on 27 minutes and Dejan Kulusevski, another January arrival, was thrown on. Sessegnon was hauled off to sympathetic applause from the Spurs fans as he trudged around the outside of the pitch. A change was needed but there was appreciation that it was harsh for the 21-year-old who suffered the ignominy of the early substitution.

The substitution brought a change in formation as Conte abandoned his 3-4-3 in favor of 4-2-3-1, just the second time since returning to the Premier League that he had reverted to a four-man defence. Harry Kane, who must have spent the opening 45 minutes in disbelief at was going behind him, saw a header saved by Jose Sa in the final action of the half – as Spurs were again booed off the pitch.

The second half brought fewer errors from Spurs, but little improvement. Kane was unable to turn his frustration on what has happened at the other end of the pitch into a meaningful effort on goal. Kane and Son Heung-min both had free-kicks from close range blocked, Winks saw a shot deflected onto the outside of the post, before Kulusevski fired wide. Cristian Romero’s late header needed to be tipped over the bar by Sa.

There were further boos at full-time but the damage had been done long before then.