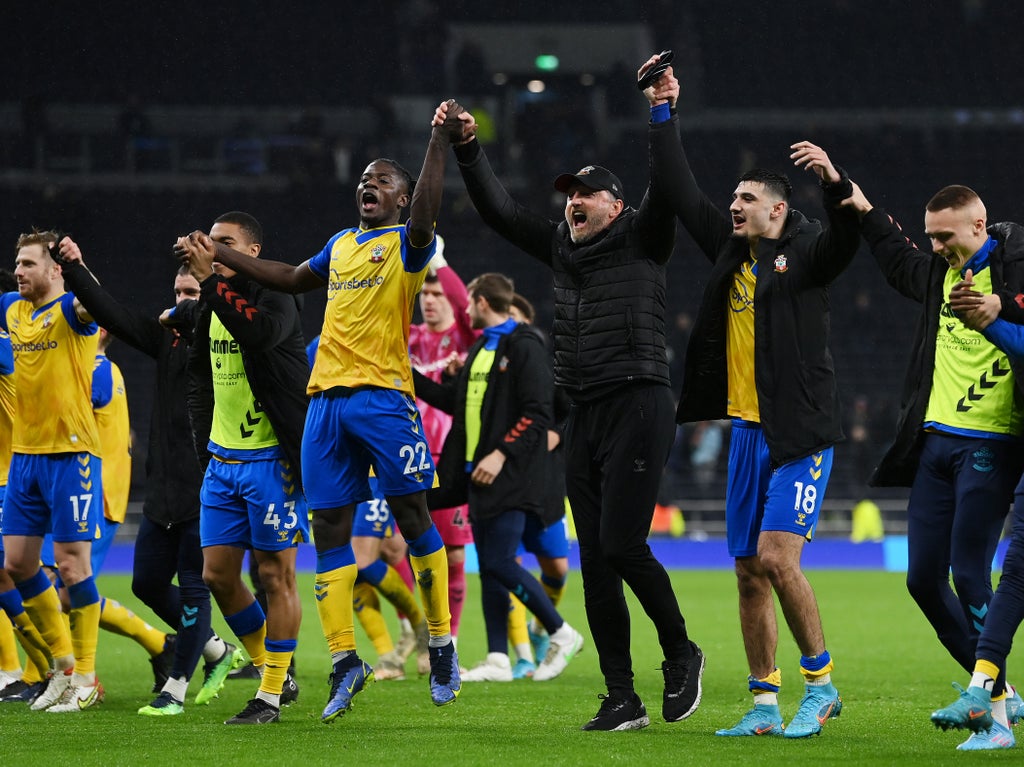 Spurred on by injustice and indignation, Southampton launched a resounding late fightback to snatch victory and leave Tottenham Hotspur’s top-four hopes sodden and deflated. As the full-time whistle blew, Ralph Hasenhuttl sank to his knees in the dugout and roared into the rain with the sort of fervor that had matched his side’s courage. Twice they had trailed Tottenham only to rally spectacularly as Armando Broja canceled out Jan Bednarek’s own goal before Mohamed Elyounoussi and Che Adams scored near-identical headers within the space of three frantic minutes to seal a 3-2 victory in north London.

It was Spurs’ second that had caused such controversy and ultimately served to ignite Southampton’s fury. What appeared a clear foul in the build-up had left Broja crumpled on the halfway line with a head injury, but play was allowed to continue and Son Heung-min thought he had snatched all three points for Spurs. Antonio Conte became so incensed by Southampton’s protests that he had to be restrained by his assistants but by full-time the Italian’s face was bleak and almost disbelieving. Presented with a great chance to gain a foothold in the top-four race, this defeat will stain long after the clothes have dried, but perhaps that was fitting on a night when Spurs defended within themselves and Southampton played out of their skin.

Conte had urged his squad to turn their stadium into a “fortress” ahead of kick-off, so there was no shortage of irony when they spent the first ten minutes under almost constant siege. Exuding the confidence of a side who’ve lost just one of their last eight games, Southampton set a frenetic pace and should have taken an immediate lead when Che Adams raced clean through only to fire straight at Hugo Lloris’ chest from point-blank range .

But as Southampton’s insurgence began to wane, Spurs soon wrestled their own period of authority. Cristian Romero, making his first Premier League appearance since early November, saw a header ruled out for offside and, soon afterwards, a slick exchange of passes between Spurs’ front-three ended with Harry Kane playing Sergio Reguilon through on goal, with Fraser Forster rushing out to close the angle and make a brilliant save.

At the third time of asking, Spurs broke the deadlock for a served lead. It was forged by Lucas Moura, who kept his place in the starting line-up ahead of new signing Dejan Kulusevksi and split Southampton’s defense with a deft inside pass. Pierre-Emile Hojbjerg’s cutback drew a last-ditch slide tackle from Jan Bednarek, who succeeded only in diverting the ball into his own net.

And yet, Southampton’s response was as emphatic as the wave of panic that seemed to suddenly rip through Spurs’ bare midfield and bumbling defence. Almost immediately from the kick-off, Armando Broja wriggled past Romero and hit the post from an acute angle before James Ward-Prowse’s fizzing shot forced a low save from Lloris. The equalizer was largely self-inflicted too, with Ben Davies slipping and failing to clear the ball in his own box. That hardly detracted from Broja’s snappy finish, though, as he rifled Romain Perraud’s cross into the roof of the net.

A helter-skelter half was back on even footing and had come full-circle, with Southampton mounting another determined assault. Spurs were doing little to mend the barricades either. A simple long ball from Kyle Walker-Peters seemed to confound all three centre-backs and left Broja bearing down on goal. The 20-year-old striker, who has been so impressive this season, covered his face in disbelief after dragging his shot wide and Lloris wore a similar expression as he stood helpless to Perraud’s blistering long-range shot that smashed into the crossbar. Spurs were clinging on by centimeters and were met with a chorus of boos at the sound of the half-time whistle.

They heeded their supporters’ call and returned with a far more assured tempo, and should have taken the lead after Reguilon’s brilliant cross found Kane unmarked at the back post. But somehow, from a mere two yards out, his header bounced over the bar. There was to be no similar reprieve next time, although there was certainly misfortune and ill-feeling. After Emerson clattered recklessly into Broja on the halfway line, again it was Moura who made the decisive pass, finding Son unmarked on the edge of the six-yard box to tap home. The celebrations were rare but short-lived.

Riled and raring for revenge, Southampton summoned yet another rearguard and this time, Spurs had no answer. The two goals were replicas of each other, pinpoint crosses whipped in from the right wing met with diving headers into the far corner by Elyounoussi and Adams.

A chaotic encounter still afforded time for one last moment of drama though. Steven Bergwijn thought he had once again come off the bench to save Spurs’ blushes but VAR put paid to that sense of relief. It was a deserved slice of luck for a courageous performance that warranted all three points and propelled Southampton into the top half of the table.