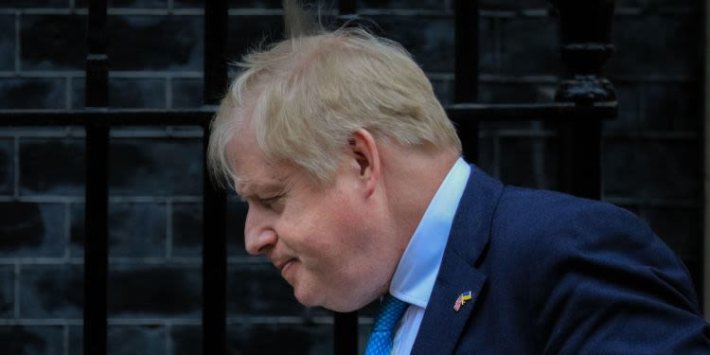 It looked like all smiles on Tuesday night when Conservative MPs were filmed crossing Westminster Bridge to the Park Plaza Hotel, where Boris Johnson had invited them to a morale-building dinner.

But privately, a number of Tories felt uneasy about making such a show of wining and dining on the same day that the Metropolitan Police issued the first set of Fixed Penalty Notices over parties held in Downing Street and Whitehall during Covid lockdowns.

At the event, Johnson gave a speech in which he joked about attempts by Tories MPs to oust him earlier in the year over outrage caused by the ‘partygate’ scandal, and described the letters of no confidence sent to Graham Brady, chair of the 1922 Committee, as “some of the greatest epistolary letters written since St.Paul.” He liked them to “elastic” because “they go in and you can pull them out” ⁠— a clear reference to recent reports that some Conservative MPs who submitted letters of no confidence but later decided to withdraw them.

The performance was reported to have received rapturous applause, but according to some of those present who PoliticsHome spoke to, it didn’t go down as well as was reported the next morning.

While it’s clear that a number of Conservative MPs came away from the Westminster soirée with renewed confidence in their leader, others felt that making light of his near-demise as leader was ill-considered, especially given that just hours earlier it was confirmed that people working at the heart of government did in fact break Covid laws during lockdown.

A former minister who attended the event said there was a feeling among some MPs – including themselves – that “he shouldn’t have gone there” with those jokes.

Another senior Conservative MP said: “I wouldn’t believe the spin that the dinner was a roaring success for the Prime Minister. There was no mass standing ovation for the PM despite Michael Gove’s attempts to engineer one, only a handful of the usual people stood”.

A 2019 intake MP said the event made them feel uneasy, particularly walking past the families of Covid victims who were protesting the holding of the dinner as Tory MPs arrived at the hotel. There was a sense of “why are we doing this?”, they told PoliticsHome. Relatives of Covid victims were heard booing and shouting “off to another party, are we?” at MPs.

Emily Thornberry, the shadow attorney general, told this week’s episode of PoliticsHome’s podcast The Rundown that for her, Tory MPs walking past the bereaved families was “the worst bit” of the affair.

“Walking past the Covid families was really, really horrible and distasteful,” said the Labor MP.

But nonetheless, the Met’s announcement this week that it was issuing 20 Fixed Penalty Notices to government officials involved in parties held during lockdown failed to cause a major stir within the Conservative party, with just a handful of Johnson’s usual critics expressing anger over the news.

Fresh allegations that the Prime Minister misled Parliament in December, when he insisted all Covid rules were followed in Number 10 during lockdown, also didn’t provoke much of a reaction from the wider Tory party — despite misleading Parliament being a breach of the ministerial code .

The current feeling among the vast majority of Conservative MPs is that Vladimir Putin’s horrific invasion of Ukraine has put talk of a change in leadership on the backburner for the foreseeable.

A smaller but not-insignificant number of Tory MPs say Johnson is now completely safe and will take the party into the next General Election in 2024. Those in this group point to recent polling indicating that the majority of the public want to “move on” from partygate, and argue that soaring energy bills and the growing living crisis are much bigger concerns for their constituents.

But there is an alternative view shared by a number of Conservative MPs: while Johnson may be secure for now, he is not out of the woods yet — or as one ex-minister put it Politics Home this week: the feeling in the Conservative party may be “not now”, but that doesn’t mean “not ever”.

As one senior Tory put it when discussing Tuesday’s dinner: “Yes, it was nice to get together and natter with colleagues. But Boris still needs to watch his back from him, the Met and Sue Gray could still see his demise from him.”

The Prime Minister faces the prospect of receiving a Fixed Penalty Notice over his role in the partygate scandal — an outcome which several Cabinet ministers this week acknowledged would be evidence of the law being broken, even if Downing Street can’t bring itself to go that far, and would have the potential to fundamentally shift the mood among Conservative MPs.

There is also concern that Johnson’s recent shake-up of his top team, which included both a new director of communications (Guto Harri) and chief of staff (Chancellor of the Duchy of Lancaster, Stephen Barclay), has so far failed to deliver the more effective operation demanded by Tory MPs.

Downing Street faced further tensions on Thursday evening when it spectacularly U-turned on a highly-contentious decision revealed just hours earlier by ITV’s Paul Brand to no longer go ahead with its pledge to outlaw conversion therapy. News of the initial decision to scrap the promise triggered outraged responses from a number of Conservative MPs.

As has been proven in the last few months, the mood in Westminster can change at the drop of a hat. That’s why for at least some Conservative MPs, the Prime Minister’s jokes about attempts to get rid of him may have made himself a hostage to fortunes.