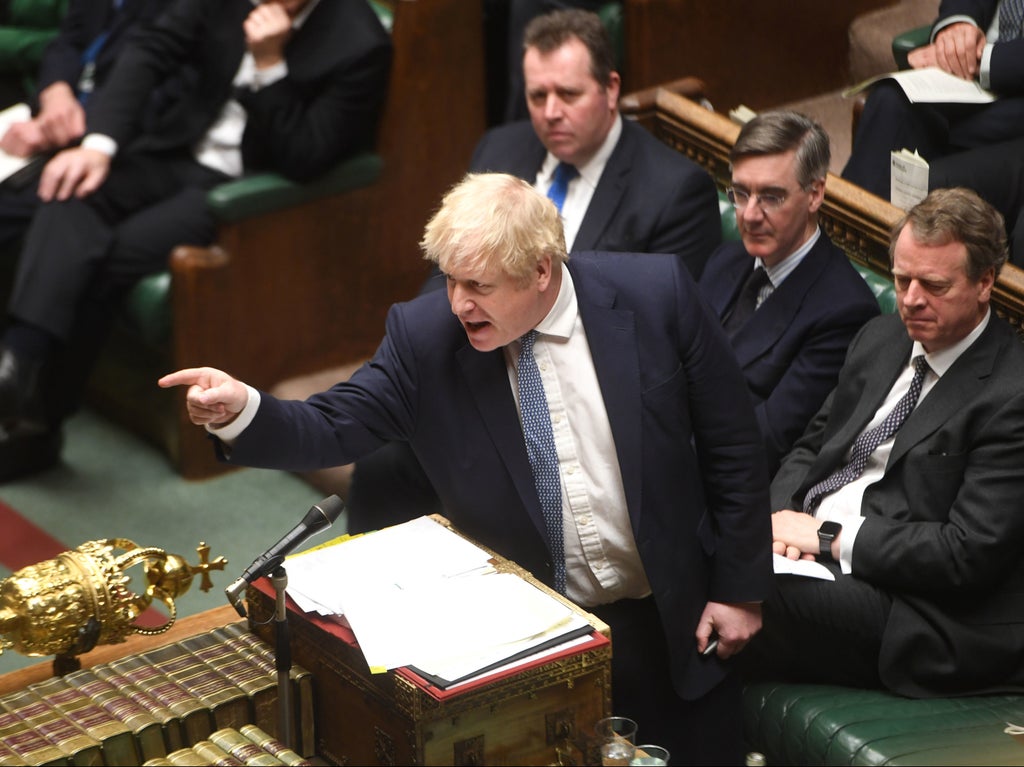 There have been tears and recriminations this week in Westminster – and not only in the Downing Street nursery. Boris Johnson’s MPs are as tired and emotional as his young children of him. And he’s the man they blame for their ill temper.

Most of the MPs tuning out of what senior backbencher Sir Charles Walker calls the Johnson “soap opera” were happy to watch when the first episodes aired, even if they knew at times they’d be hiding behind the sofa, fearful the series would end in a car crash or a shoot-out. But now, they can take it no longer.

Former Scottish Conservative leader Baroness Ruth Davidson was so angry about the contrast between the British public’s pandemic sacrifices and the partying in Number 10 that she was moved to tears on Channel 4 News this week.

The next day, calling on the prime minister to have the “courage” to stand aside, Sir Charles Walker spoke of the “grief and pain” in the country and his own exhaustion at today’s “toxic” politics. He was, he told me, simply tired of the soap opera and permanent sense of crisis and would be standing down at the next election.

“A Member of Parliament is a bit like an orange. There’s only a certain amount of juice in that orange. Now some are really juicy oranges and go on producing juice for 30 years, I’m afraid 17 years is about the moment that I’m juiced out,” he said. “I feel liberated. I feel a great weight has been lifted off my shoulders.”

When Devon MPs Sir Gary Streeter and Anthony Mangnall went public on their resignation calls yesterday it was dubbed the “cream tea coup”. I asked Mangnall if there was indeed a plot and he joked: “Just remember it is ALWAYS cream first.” Despite my parents living on Exmoor, I’m afraid it’s jam first for me. But regardless, I’m not sure these decent hard-working MPs have the stomach for a plot. They’re simply worn out.

Downing Street is banking on the public getting tired of Partygate now. It’s true, the half caravan is starting to move on. It felt refreshing yesterday to escape Westminster and focus on tackling inequality – or “levelling up” in government parlance – in Stockton-on-Tees. But despite the fatigue among both political and media classes, and the appetite for debating serious concerns about Russia’s antics or the cost of energy, Downing Street can’t switch off the soap until the star of the show is written out of the plot.

Johnson is now engaged in a dangerous and distracting war of attrition with his own backbenchers. Although allies report that the prime minister himself feels depressed about his current predicament, in truth, it seems he’s always relished chaos.

Vladimir Putin loves to see Britain in chaos too. But a lot of decent, mainstream Conservatives aren’t so keen. They used to warn voters about the risk of chaos with Ed Miliband. Little did they know what lay ahead under Johnson. And while pollsters used to declare Sir Keir Starmer too boring, the polls suggest punters think boring sounds quite appealing just at the moment. After all the drama of the last few years has started to wear thin, unflashy public service may be back in vogue.

See also  'There are many ways to be successful': Parents praise teacher's heartwarming letter to pupils ahead of SATs

I thought about this when I attended my neighbor MP Jack Dromey’s funeral this week, and listened to the tributes in the Commons. A true public servant remembered for his many campaigns by him – most notably helping secure justice for the Grunwick women – he drew respect from across the House. His widow, Harriet Harman, said what he stood for was “the polar opposite of the culture wars”.

Dog whistle politics – of the kind that saw leading Conservatives attempt to smear Sir Keir about the failure to prosecute Jimmy Savile – was not for him. The public deserves more MPs like Dromey. The slurs and the distortion of the truth (or worse) risks poisoning the democratic well. It’s sad that those who believe in a kinder, more consensual politics have been driven out, but I don’t blame them. No wonder Sir Charles Walker is looking forward to spending more time going fishing. For him, the soap opera has gone on long enough.