A Tory MP today said today he doesn’t agree women have ‘an absolute right to bodily autonomy’ in a debate over the American abortion ban.

Danny Kruger added that British MPs should not ‘read’ the US over the democratic process, which has sparked mass protests across the nation.

A number of politicians raised concerns over last week’s verdict to end constitutional protections for abortion that have been in place for nearly 50 years.

The decision to overturn the landmark Roe v Wade ruling is expected to lead to abortion bans in roughly half of US states.

Mr Kruger, who represents the constituency of Devizes in Wiltshire, told the Commons this afternoon he would ‘probably disagree’ with other MPs about the US Supreme Court decision.

He said: ‘They think that women have an absolute right to bodily autonomy in this matter, whereas I think in the case of abortion that right is qualified by the fact that another body is involved.’

As MPs tried to speak over him, Mr Kruger added: ‘I would offer to members who are trying to talk me down that this is a proper topic for political debate and my point to the frontbench is I don’t understand why we are reading the United States on a judgment to return the power of decision over this political question to the states, to democratic decision-makers, rather than leaving it in the hands of the courts.’ 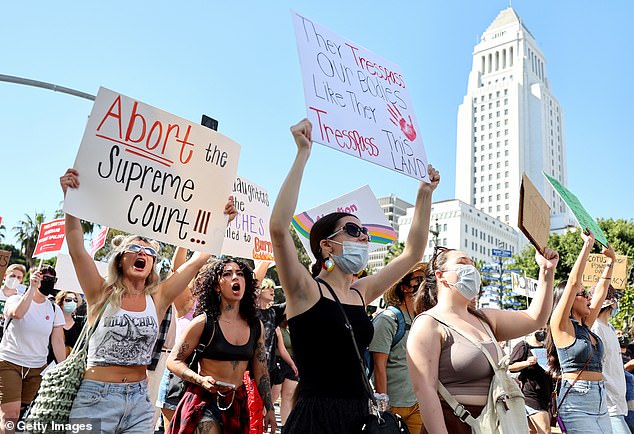 GBBO Prue Leith’s religious son Danny Kruger who was once Boris Johnson’s political secretary and a speechwriter for David Cameron:

Danny Kruger is the son of Prue and her late husband Rayne Kruger, who died in December 2002, aged 80.

He is a former speechwriter to David Cameron – and dreamt up the famous ‘hug a hoodie’ line and a member of a free-market think-tank, the Legatum Institute.

He has been described as ‘a passionate Christian’ who brought the Gospel to convicted criminals through the prisons charity Only Connect, which he founded, and is also a vocal supporter of legalization of cannabis.

Mr Kruger is an Old Etonian and his ‘hug a hoodie’ line came back to bite him in 2008 when he and a friend tried to tackle a moped thief and was attacked, ‘with all the rage of Cain’ by a ‘rat faced boy ‘.

Mr Kruger said he still stood by the idea that love ‘is a crime fighting device’.

The MP received an MBE in 2017 for his charitable work.

He has been the Tory MP for Devizes in Wiltshire since 2019 and was a Political Secretary to the Prime Minister, Boris Johnson – a key aide who acts as the PM’s troubleshooter – the same year.

Most recently, in August 2020 Kruger was photographed breaching the rules on the mandatory wearing of masks on public transport. He apologized and stated that he ‘simply forgot’ and later said he disliked ‘absurd masks’.

Then in June last year, Mr Kruger was fined after his Jack Russell puppy, Pebbles, caused a stampede when he chased a 200-strong herd of deer in London’s Richmond Park.

The House was also told that far-right American groups wanting to roll back UK abortion protections will be given ‘renewed impetus’ by the decision.

Labor former minister Dame Diana Johnson asked Foreign Office minister Amanda Milling: ‘Can the minister confirm that the Government will continue to support and fund reproductive healthcare programmes, including access to terminations around the world, in light of this decision?

‘With far-right American groups already organizing on rolling back the 1967 Abortion Act in this country, this decision will give them renewed impetus for their work.

‘So will the Government look again at protecting women attending abortion clinics through the introduction of buffer zones, as proposed by (Rupa Huq, Labor MP for Ealing Central and Acton)?

‘And finally will the Government confirm its commitment on women’s rights to access reproductive healthcare – including abortion – and if the Government plans to change human rights legislation in the UK, that it will completely safeguard the rights of women to bodily autonomy.’

Ms Milling said in reply: ‘As the Prime Minister said at the weekend, he felt – and I share the view – that this is a big step backwards.

‘We will continue to push for strong supportive language in the UN and other international fora.’

The urgent question from Dame Diana had sought to press the Foreign Office to make representations to the US government about ensuring that women’s rights to access reproductive healthcare are protected.

Meanwhile, Conservative former minister Jackie Doyle-Price told the Commons: ‘Can I just say to the minister that we are in no stronger position to lecture the United States about this because we have done much the same ourselves.

‘Is it not time we led by example and reviewed our abortion laws which are now more than 50 years old and base them around a safe framework for terminating pregnancy in the interests of women, rather than be characterized by these absurd moral extremes?’ 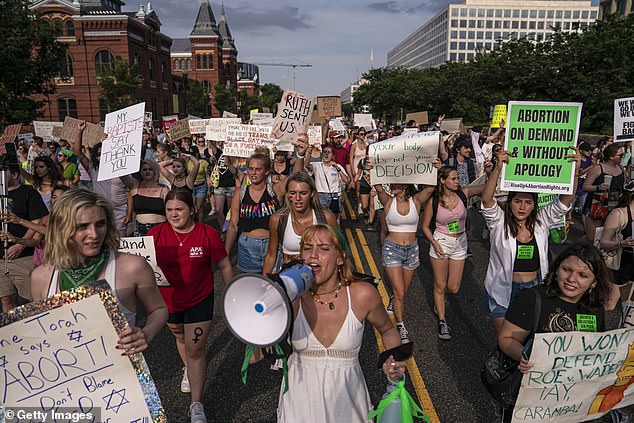 Abortion-rights activists march toward the White House over the weekend in Washington, DC.

Ms Milling replied that a vote on any future abortion law reform would be a ‘matter of conscience’, but added: ‘Our policy is ensuring that women can access health services, (it) is safe and is a secure way and it remains a priority, that is a key priority and we will work closely with abortion providers and other stakeholders on the provision of these services.’

Tory MP Lucy Allan Well for Telford also showed her opposition to Mr Kruger’s views and tweeted this evening that he has ‘no right to impose his views on others’.

She wrote: ‘We are going to disagree on this – I accept Danny’s right to disagree, but he has no right to impose his views on others.

‘Do men have a right to bodily autonomy? Is it just women who do not have that right?’

Elsewhere, Dame Maria Miller called on the Government to ‘hold the US government to account at the UN’, and to confirm that the ‘UK Government would view any such change as a breach of its inalienable international obligations’.

For Labour, shadow foreign secretary David Lammy said: ‘What is happening in America, and it is happening in our own country, is an organized hard-right and global political movement that is seeking to overturn the rights hard-won in the 20th century .’