The president of the Parliament, Roger Torrent, today called for participation in the Diada of Catalonia, tomorrow, Tuesday, September 11, to make it a “massive, peaceful, democratic and civic day”, and has defended that the independence movement should work to “be more” and “add more sensitivities”.

The independence leaders imprisoned or abroad yesterday published a joint text in which they call for the mobilization on September 11 to demand “freedom, justice, democracy and the Catalan Republic”, and have asked for the involvement of unions, employers and third party entities. sector.

Speaking to RNE-Ràdio4, Torrent has “joined” that call for the Diada to be “especially massive” in participation, and has confirmed that he will attend the independence demonstration tomorrow.

Regarding the criticisms of Cs, PSC and PP to the “sectarianism” of the institutional acts of the Diada, which will lead to them not participating in them, Torrent has reminded them that “it is normal that the national holiday of a country not only has a cultural or folkloric aspect, but rather It should serve to put on the table debates that occupy the majority of the country“, as is now the” concern about the limitation of fundamental rights. “

More of 400,000 people are registered to participate in the demonstration, as reported by the Catalan National Assembly (ANC), organizer of the event together with Òmnium Cultural.

The number of registrants is higher than in previous years, as well as the number of hired coaches, which already amount to 1,300. 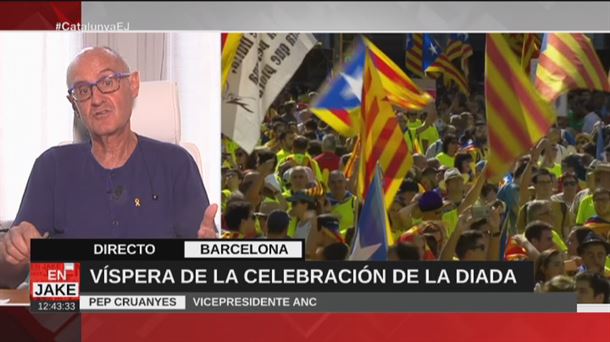 Participation of EH Bildu, PNV and Gure Esku Dago in the Diada

A delegation from EH Bildu with its general coordinator, Arnaldo Otegi, at the helm He is in Barcelona to participate in the events of the Diada, a stay in which he plans to hold meetings with various Catalan institutional and political representatives.

Along with Otegi, the parliamentarians of the sovereignist formation Maddalen Iriarte and Bakartxo Ruiz have traveled to the city, EH Bildu reported today in a statement.

The delegation will participate tonight in the institutional act that will take place in the Catalan autonomous chamber and tomorrow they will attend the traditional floral offering at the Rafael Casanova monument.

The president of the PNV, Andoni Ortuzar, will visit tomorrow at the Lledoners prison to the Catalan ex-ministers Josep Rull, Jordi Turull and Joaquim Forn.

The PNV has reported that Ortuzar will lead the delegation of this party that this Monday and Tuesday will participate in Catalonia in the events on the occasion of the Day, invited by the Generalitat and the PDeCAT.

A delegation from Gure Esku Dago is also already in Catalonia where it has met with members of the Assemblea Nacional Catalana and Òmnium Cultural, to share the vision on the current political context and the roadmaps for the following months and tomorrow they will participate in the events of the Diada in Barcelona.