Tommy Robinson was filmed being detained by police at Manchester Airport just hours after he claimed he was deported from Mexico.

Robinson, real name Stephen Yaxley-Lennon, featured in video footage which showed a heated confrontation with two police officers at the airport this afternoon who say they were believed to have ‘breached security’.

In a Telegram message to his followers shared later today, the 39-year-old accuses one Greater Manchester Police Officer of trying to ‘bait’ him into a reaction so they could ‘arrest him legitimately’.

It is not clear if Robinson was arrested but the series of videos shared on Telegram appear to suggest he was detained before witnesses confirmed police had the wrong person, apologized and let him go.

It comes the day after he claims he was detained at Cancun airport in Mexico in front of his three children before being deported at the request of the British Government.

It is understood he landed at Manchester Airport from Cancun on a flight which landed this morning.

In the new video, Robinson appears to be stood in the baggage claim area of ​​Manchester Airport waiting for his luggage when he is confronted by an officer armed with a Taser.

Pictured: Tommy Robinson was filmed being detained by police who accused him of breaching security at Manchester Airport just hours after he claimed he was deported from Mexico

The officer has hold of Robinson by the shirt and detains him against the wall of the airport next to the baggage carousel.

Tommy can be heard asking ‘what are you going on about’ as the officer asks ‘do you understand that?’

He then appears to reach for his handcuffs but Robinson moves his hand away and repeatedly asks ‘what have I done?’

In another 41-second clip, the officer, still with his cuffs in hand, can be heard telling Robinson to listen before they share an inaudible exchange in front of a second officer.

Robinson can be heard saying ‘I haven’t come from anywhere. Well you’re not speaking to me, you’re screaming at me like you’ve done through there. What are you on about?’

The 39-year-old can then be seen pointing at someone off camera and asking them to ‘be his witness’ who then tells officers ‘it wasn’t him’. 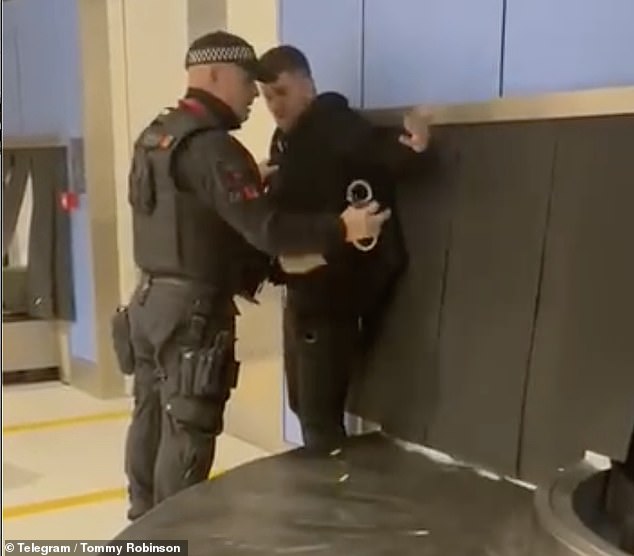 During the heated confrontation, the officer attempted to cuff Robinson multiple times

The officer then ushers Robinson into a staff-only part of the baggage claim while bystanders slam the police as ‘out of order’.

In a third clip, the officer’s cuffs can be seen back in the holder and Robinson can be heard criticizing the handling of the situation, asking who is going to pay for his top which he says was ripped.

The officer responds: ‘If you want to make a complaint regarding that, that’s entirely up to you.’

When Robinson asks why the incident took place, the officer says: ‘Because I was convinced you had breached security – that’s why.’

He then clarifies that he has since spoken with witnesses and when accused of assaulting Robinson, he replies: ‘I’ve not assaulted you. I’ve acted within the law because I believed at the time that you committed a crime.’

Robinson brands him ‘the most aggressive police officer I’ve ever witnessed’ before telling him he was unreasonable and shouldn’t be carrying a Taser.

The English Defense Leader founder then tells the officer he does not accept his apology before walking away. 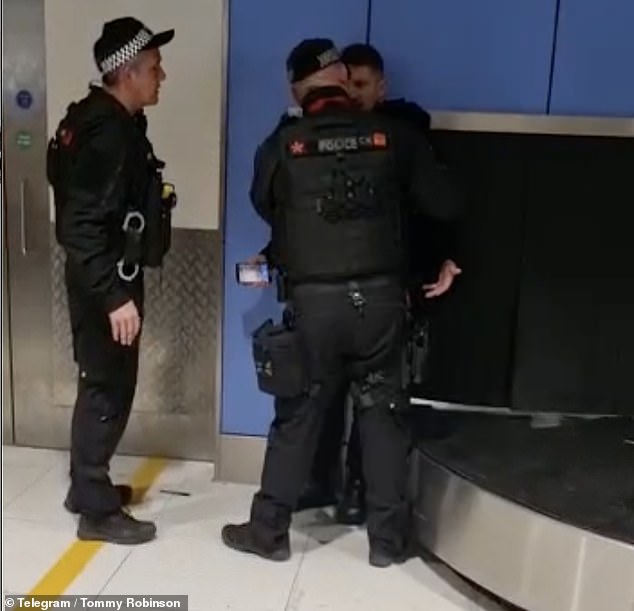 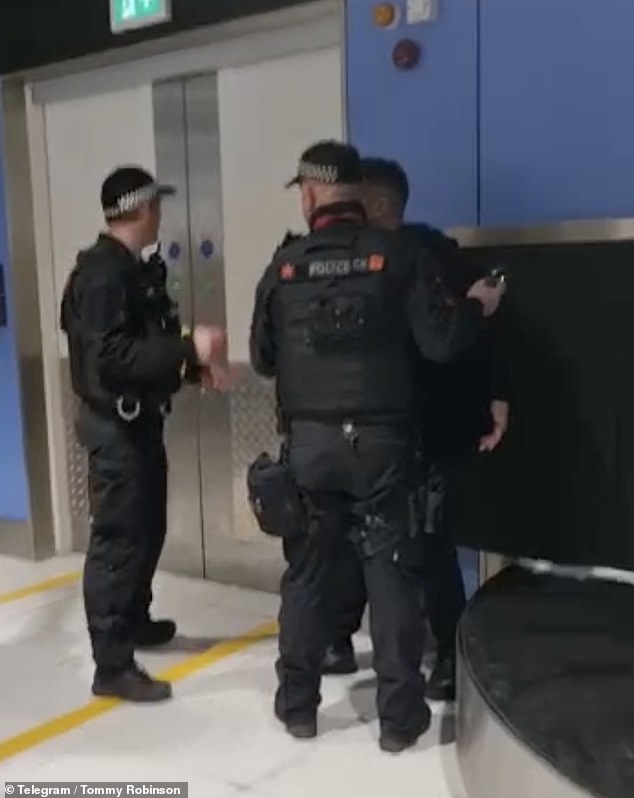 It comes as Robinson claimed he was deported from Mexico for ‘national security reasons’ after he says he was arrested while on an Easter getaway with his family.

Robinson shared footage of him allegedly being arrested at Cancun Airport while on a half-term holiday with his three children.

In clips shared to Telegram the 39-year-old filmed an interaction between himself and a man purported to be an immigration officer, while also showing off the ‘holding cell’ he was said to be held in.

‘I have been arrested, separated from my children and now I’m being deported as a matter of national security’, he explained.

In an interaction with Cancun Airport staff, Robinson is told the information about his arrest is ‘confidential’ but has come directly from the capital, Mexico City.

After saying he is a journalist and pleading his case, he adds: ‘I’ve never broken a law here. All I do at home is talk about Islam’.

Tommy Robinson, real name Stephen Yaxley-Lennon, has shared footage of him allegedly being arrested at Cancun Airport while on a half term holiday with his three children 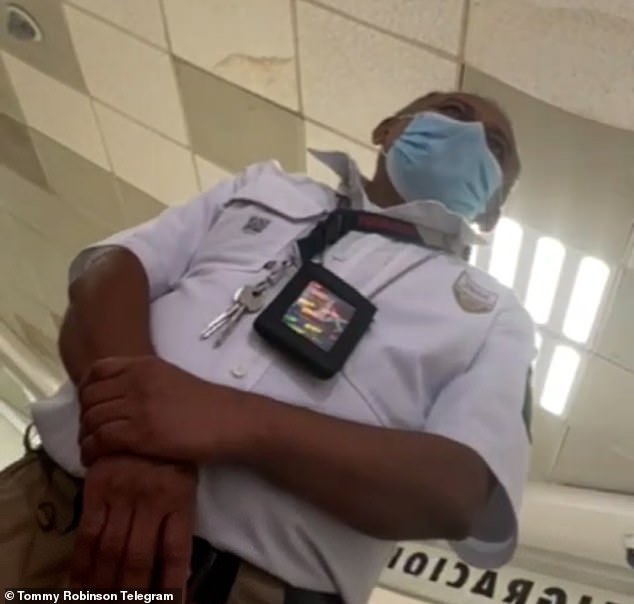 In an interaction with Cancun Airport staff, Robinson is told the information about his arrest is ‘confidential’ but has come directly from the capital, Mexico City 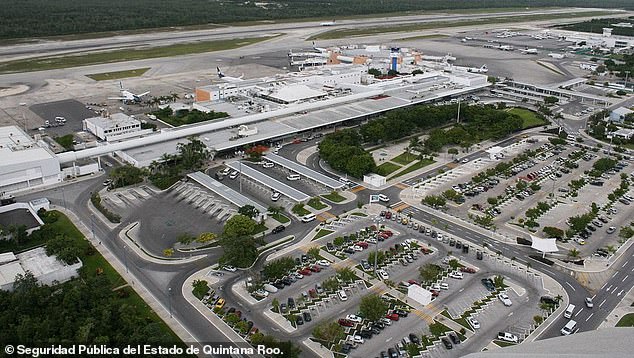 Robinson, who claims he was separated from his three children, is reportedly being held in Cancun Airport (pictured)

Robinson, who told his 157,000 followers he has traveled to Mexico three times and never committed a crime, questions the charges he is allegedly being deported on.

‘I’ve never caused a problem, landed for what is clearly a family holiday, and I’ve been arrested, detained and separated from my children.

Several reports suggest Robinson will be sent back to England on Saturday, while he himself has said that his children’s mother is having to fly out to collect the kids.

It’s not the first time the EDL co-founder has run into issues while abroad.

In 2020, it was widely reported that he had fled to Spain following an Arson attack on his wife Jenna Vowles’ home.

Robinson said they had got places at local schools for his three children but was still ‘in the process’ of finding a permanent place for them to live.

See also  Everything you need to know about 'Benidorm Fest': this will be the second semifinal | Present

He added: ‘I need my family to be away because they are not safe basically.’

But in a stunning u-turn, he later announced he would not be permanently moving to Spain because England ‘is my home’.

While he claims he has never committed a crime in Mexico, the far-right campaigner has faced prior convictions for violence, fraud and stalking in the UK.

In November 2013, Robinson pleaded guilty to fraud and was jailed for 18 months. He also has convictions for stalking, assault, using someone else’s passport, using threatening behaviour, and contempt of court. 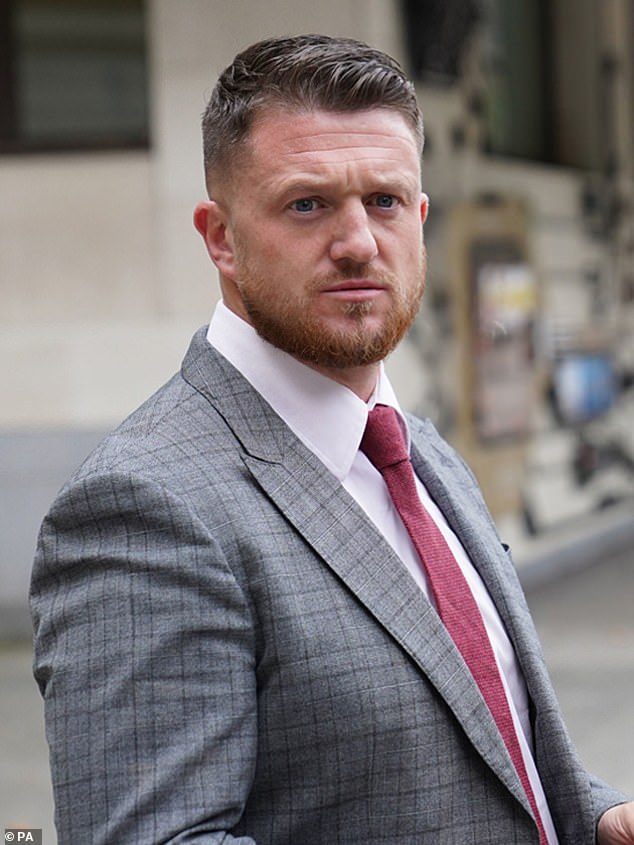 Robinson, who tells his 157,000 followers he has traveled to Mexico three times and never committed a crime, questions the charges he is allegedly being deported on. Pictured outside Westminster Magistrates’ Court in August, 2021

Robinson is currently being pursued by creditors for an estimated £2million after he was ordered to compensate a Syrian schoolboy he wrongly accused of attacking a girl.

He declared bankruptcy during a High Court libel battle brought against him last year by teenage refugee Jamal Hijazi.

However, anti-racism campaigners have accused the convicted fraudster of ‘hiding millions’ to avoid paying the teenager.

Campaign group Hope Not Hate allege that Robinson has access to assets worth up to about £3million through property acquisitions, investments, donations and book sales.

Hope Not Hate’s chief executive Nick Lowles said: ‘Jamal Hijazi is a victim of Tommy Robinson’s vitriol, and it is important that Robinson is held to account.

‘It is wholly unjust that while his victim’s life has been turned upside down, Tommy Robinson carries on his life as before.

‘Tommy Robinson has to understand that there are real consequences to his hate. It is time to make him pay up and ensure that his victims get proper justice.’