Skip to content
Home News Todoque, the town of La Palma buried by the volcano 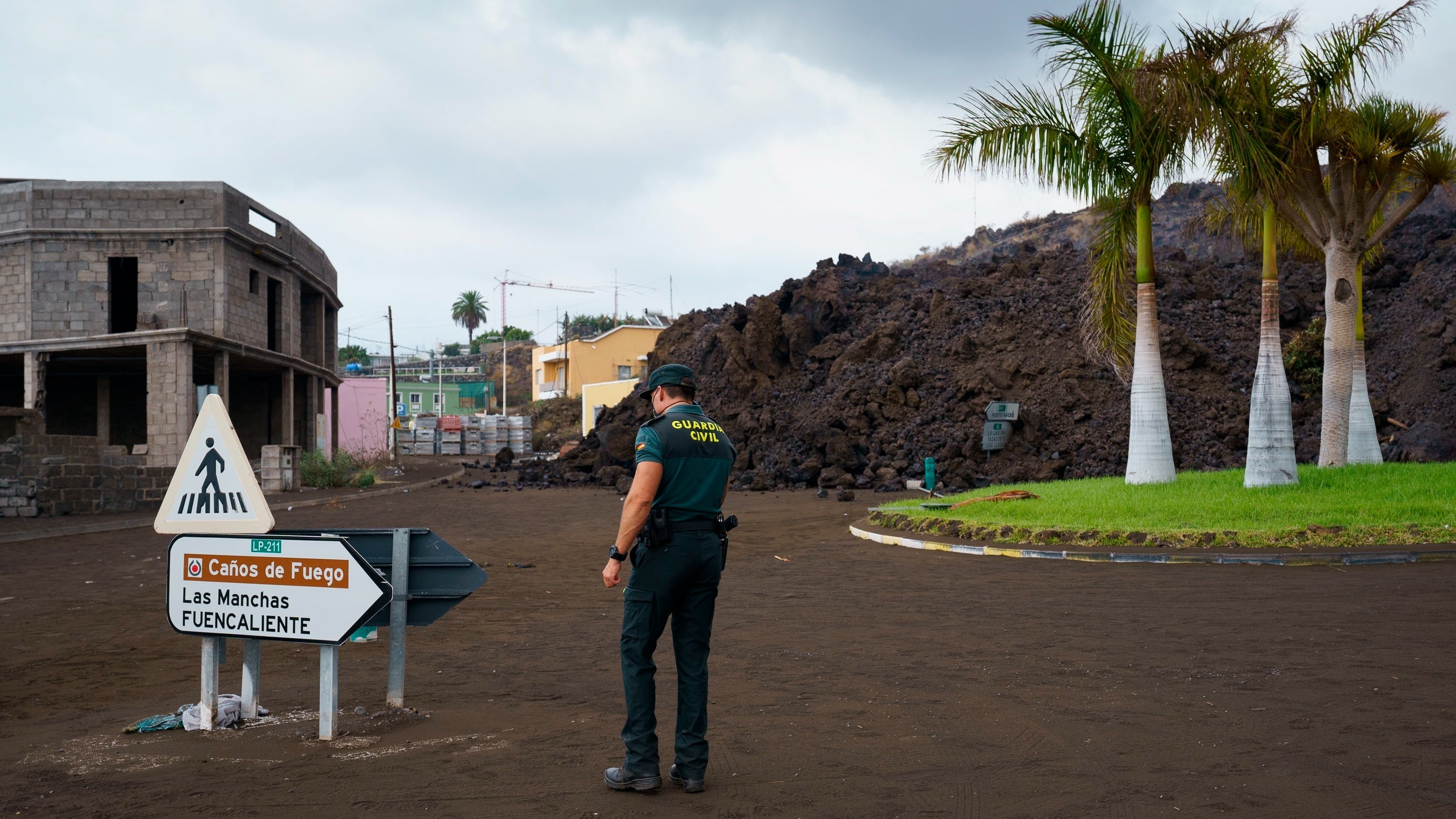 In the town of Los Cancajos, very close to Santa Cruz de La Palma, the Padisbalta association has installed a traditional nativity scene that faithfully reproduces what the Todoque neighborhood was like. There it is all in miniature: the church of San Pío with its bell tower, the square, the roundabout, the green house, the Altamira restaurant, the road … The montage has become a pilgrimage center for many todoqueros, who come every day to reconnect with the place that was once their home, and that will remain forever buried under lava. Most can’t help crying with excitement when they contemplate it.

The destruction of the Todoque buildings in slow motion has been the most representative image of the La Palma tragedy. Of all the populations of the island, This is the worst part has been. “Todoque has been erased as if it had never existed. In Las Manchas and La Laguna, which have been partially affected, the neighbors know they can return. But Todoque has no soil right now that remains free without lava, and this is what the Todoqueros affects in a more special way, because they know that they will not be able to return in any way, at least in the short term, “he explains Alberto Hernandez, the parish priest of the town, who became one of the main supporters for his neighbors when the onslaught of the volcano arrived.

The inhabitants of Todoque are now scattered around La Palma, and there are even some who have gone to other islands such as Tenerife, or the Peninsula, fleeing the pain caused by the loss of their living space. Beneath the lava, not only their houses or their lands have been buried. A very important fragment of themselves has also remained there. “We have lost the origin, the identity, the references … In my family, much more, because we used to live in the neighborhood, on the street. We were very participatory, very much like a neighbor, of what it is to live in a town , and that we have lost everything “, describes Goretti Alvarez with tears in the eyes.

“Alberto Hernández: Everything that has been erased as if it had never existed.“

This todoquera lives for rent with her partner in a small apartment, and since the eruption she has been mired in a limbo where it is difficult to glimpse the end. The volcano has completely killed his life, and now he depends on financial aid that is taking too long to arrive. When he speaks of these aid, he cannot avoid the comparison with the earthquake in the Murcian population of Lorca, whose inhabitants “in the end received very little.” In addition to having lost his home, Goretti is in a situation of ERTE, like his partner, because the company in which they both work, related to the tourism sector, had to interrupt all its activities due to the eruption.

Nayra González She also rents in an apartment with her husband and two children. But the family is incomplete. Todoque’s house was the closest thing to a small zoo, with two dogs, two cats, pigeons, turtles, fish … Now all those animals are found in different places, because it is impossible to live with them in a flat, and the dream de Nayra is to bring them all together again in a house the same or very similar to the one they had.

“Life in Todoque was wonderful. Many people say we did not value what we had, but I think we did.
We had the church, a supermarket, the school, the health center, the Neighborhood Association, the bars … Even the Playa de Los Guirres, which was where we all went. But the best of all were the festivities of San Pío, on August 21 … “, recalls Nayra with a broken voice.

In the Todoque tragedy, the true turning point was the fall of its bell tower. An image captured live by the cameras and then repeated on screens around the world until exhaustion. That also meant the collapse of its inhabitants, who were still trying to assimilate everything that was happening to them. The town not only lost the tower and the church, but the square and everything around it also disappeared, that space that was literally the heart of the community.

“For many, their usual meeting place was the church, or their surroundings, where the neighborhood association is located, the square … Everything was in the square. On Sunday mornings it was a bustle of people, and for many older people it was practically his only weekly outing “, he describes Alberto Hernandez, who at that time lost the temple to which he had been linked for the past thirteen years.

“Goretti Álvarez: When the church fell, we understood that our neighborhood had been broken.“

Goretti Alvarez He tells how to see the church fall “was the true moment in which we changed the stage, and we went from that initial denial to pain.” “It was not only because of the church, but because our neighborhood had broken down. The church, the square and the neighborhood association left, which was all together. That is, the nucleus of Todoque ceased to exist,” he recalls.

In the case of Nayra, the day she saw the tower fall “was also the most painful”, and for her and her family it was even worse, because it happened the same day she lost her home. A date that they can never forget: September 26, 2021. “It was very hard, because we saw our symbol fall, and we were left as orphans. As long as the church remained, we could have started to build around it,” he says.

There is an image of those moments that faithfully represents the impotence of an entire island before the advance of the lava. The Plaza de Todoque was under construction, and the material for the works was there: large pallets with the tiles to be laid on the floor. Civil Protection officers and firefighters, in a desperate attempt to divert the laundry from reaching the church, put up these pallets as a protective wall. That did not help, but they could not sit idly by without exhausting every last resource that was in their power.

A network of connected families

At Todoque, community was everything. A collective sentiment that has its roots in the traditional pattern of housing construction that has been followed in the Aridane Valley, as its inhabitants say. The grandfather or great-grandfather returned from Venezuela or Cuba with money, and invested it in a farm where he would build a house. But that lot used to be big, so there was also room for children and grandchildren to build their homes. Thus, it was possible to weave a network of families connected to each other, which transferred that union to all areas of the community.

Goretti Álvarez recalls how “everything important to Todoque was done by our elders with their hands. Even the asphalt of the streets was a community work, which became a party. The city council put a machine, and then the men did the work of paved, while the women made food for everyone and took it with the children. “

Now, the most destructive volcano of all those that are remembered on La Palma has devastated that network forged over decades, but the todoqueros are going to fight to put it back together one day. “Being close to Todoque would make me very excited. I am one of those who thinks that he will return there, to his house, or what remains of it. I do not want to be expropriated, and I would like to rebuild my house in it I am aware that it will be a long time, but I would like to return, even if it is to take care of my grandchildren, “says Nayra.

“Nayra González: I would like all those people to continue being part of my life.“

“You talk to many people who tell you that not even crazy returns to Todoque, but then we are people who would like to be close. We do not want to turn the page, because there are many protagonists of the Todoque story, which is very beautiful and we are still writing it We have to continue and I would like all those people to continue being part of my life. I hope that after all this we will continue together, “he adds.

Like her, Goretti He also affirms that he will try by all means to recover, as far as possible, Todoque’s life, although he is aware that it is something that “they have lost forever.” “You can make another town, you can reinvent yourself, but the same is going to be impossible. Even so, I am also one of those people who will fight hard to recover it, wherever and however it may be,” she is determined.

In Los Cancajos, a traditional nativity scene has recreated the Todoque neighborhood in great detail. It is an emotional tribute to some people who have lost everything, and who come there to somehow reconnect with all that life that will remain under the lava. They say that even the toughest all-rounder cries like a child when he is in front of the miniature representation of his people. Because that was the center of the world for them, their home. Until a cursed volcano came and buried him forever.