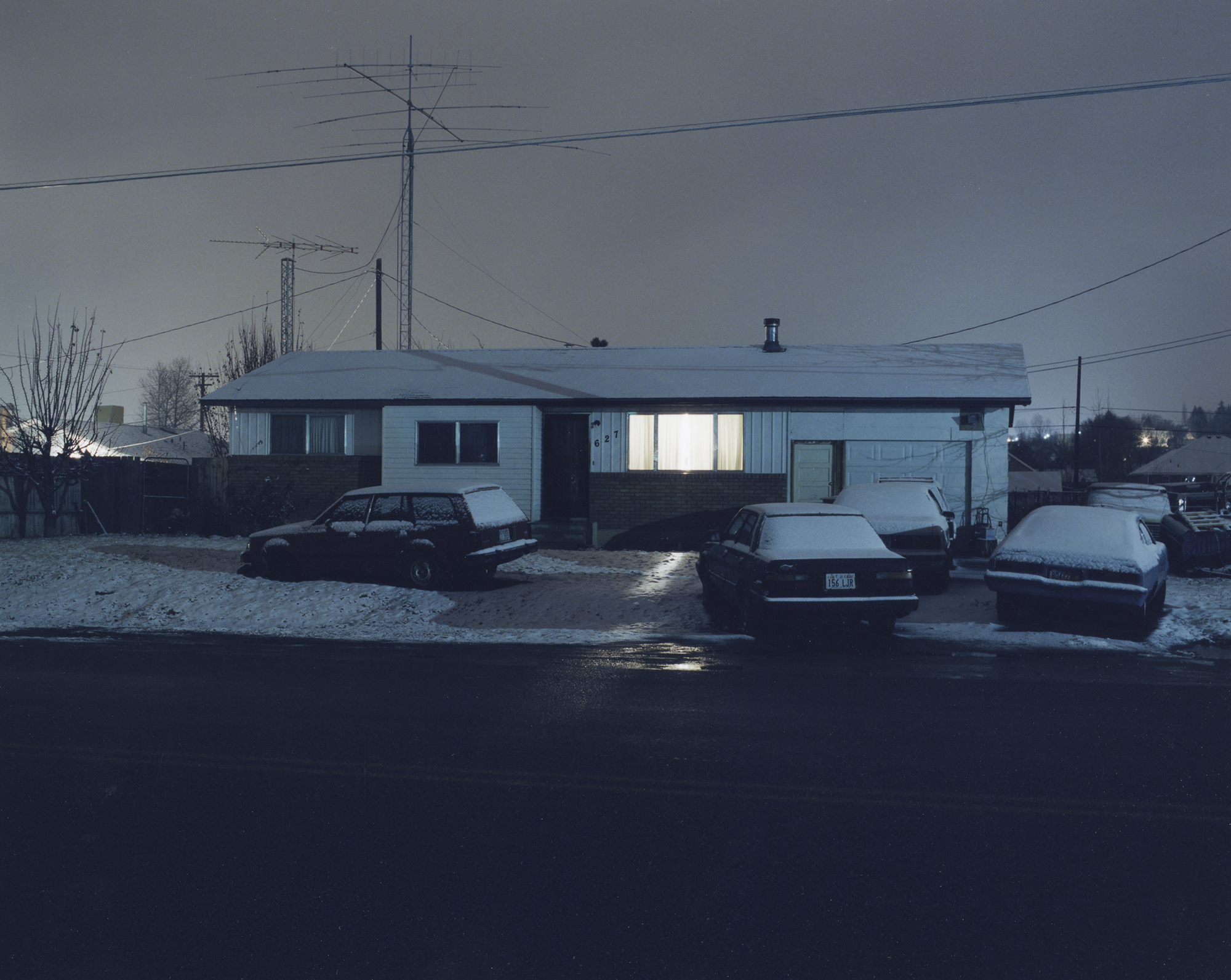 “Things seem strange when you are the stranger,” says the critic and writer Luc Sante in the prologue of Outskirts (Nazraeli), one of the six monographs that make up the work of Todd Hido (Kent, Ohio, 1968), chronicler of the night in whose silent work echoes the mystery and uncertainty that surround the peripheral neighborhoods of the United States. Anonymous geographies that they transcend the concept of time and place, which the author travels in his car willing to let himself be attracted by the glare of a single light.

“The night has always held a special fascination for me,” explains the American photographer. “The world slows down and relative calm seems to take hold of it. Within this darkness there is something that often captures my attention, and it is the kind of illumination that comes from a single source or window. It awakens in me a sensation associated with isolation, at the same time that it functions as a magnet that invites me to mentally cross the threshold and wonder about what may be happening behind the glass ”.

One winter night in 2002, while driving down a highway in Utah, Hido spotted in the distance the house that appears in the photograph that he chooses as the favorite of his career. “I left the road and went back until I reached the town where I found the house. My intuition told me that there was something in that place. Sometimes I shoot my camera from the car, but this time I planted the tripod on the street and shot in natural light. The clouds were low and the ground covered with snow. It is a special image for me because it simply looks like a photograph of a house at night, but it is much more ”.

Above the silent and melancholic beauty that defines his work, Hido is capable of creating an atmosphere that makes the viewer uncomfortable and traps through its undeniable psychological burden. Both in the bleak images of domestic interiors that make up the series Interiors, where the echo of those who once inhabited empty dwellings still seems to be heard, as in the series dedicated to suburban landscapes, where the author dispenses with the human figure. Each house appears isolated within the frame and yet the work does not speak of architecture but of its inhabitants. More than landscapes, they are portraits. “One of the comments about my work that I like the most was made by a blogger on the internet”, highlights the artist. “It goes like this: ‘Todd Hido’s photographs do something for me; It is as if he were the one who recalled my memories. But we have never met. “

“Deep down you look for lonely roads and places because you long for something. It is an act of acceptance of what is missing “

The chosen image is reminiscent of the work of the painter Edward Hopper. Both in the emotional narrative and in the gaze of voyeur as in the links with literature and cinema established by both authors. “Hopper has been one of my great influences,” acknowledges the photographer. “In my work we could find a certain loneliness that we would also find in the painter’s work, but I ignore the human figure and I believe that it is precisely this absence that gives rise to my photography being observed as if it were a cinematographic scene that In the absence of characters, he will automatically be assaulted by the mind of the viewer. I would say that each of the people looking at my photographs is likely to imagine something unique, related to their own experience. And this is something that really pleases me. There is no single meaning for every image. Each spectator contributes his own ”.

“There is something about the places I photograph that reminds me of where I come from,” says the author. “Deep down you look for lonely roads and places because you long for something. It is an act of acceptance of what is missing. And it is probably from that recognition that the feeling of strangeness and unease that my photographs provoke comes from ”. Similarly, the artist assures that he takes photographs with the spirit of a “documentary maker” and that his images “are very real.” However, the fact of not being a documentary maker, or a journalist, allows you to add subjective layers through color, through darkness, with the purpose of generating a state of mind. “My favorite tool is ambiguity,” he says. Hence, he prefers to suggest rather than show, and that his work contains many more questions than answers.

Hido’s facet as a collector is known, mainly photobooks. “I still keep fresh the memory of the moment when, at the age of 18, when I was beginning to study the medium, I understood the power of the photobook. The book offers the possibility of displaying photography in a way that one could never find on an exhibition wall ”, he explains. “At that time, and with a small student budget, I bought second-hand volumes for three dollars, because I wanted to have those images in my library; at my place. There is something very special about wanting to surround yourself with images, to be accompanied by the work of those you admire. As one of my favorite artists, Emmit Gowin, used to say: ‘I am blissfully influenced by everything I love.’

See also  What are white phosphorus bombs? All we know about deadly weapons Russia accused of using in Ukraine war