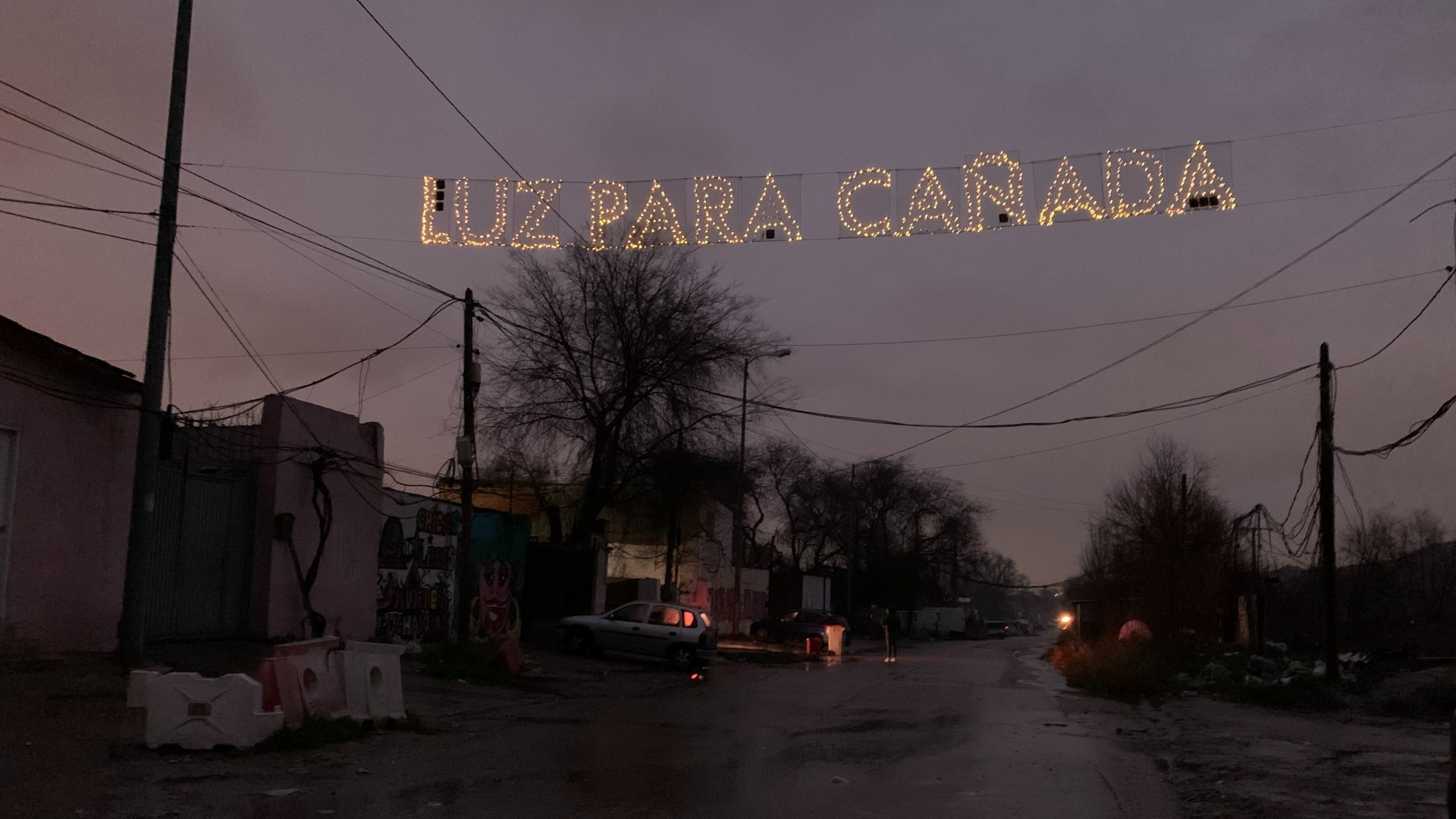 The sun hides behind the clouds and still allows us to observe life in the Cañada Real, before the Twelfth Night falls, which is known as the most magical night of the year. But here it is cold and it rains in the wet. Zinc-covered houses do not shelter from low temperatures. “Love in the dark”whispers graffiti in bright colors. Its streets talk all the time. The smoke from the chimneys points to the sky and some solar panels pose waiting for the sun of a new day. It is the second winter without electricity for the inhabitants of Sector 6 of the Cañada Real. This year they are not caught off guard.

Two sectors, five and six, of this settlement, one of the largest in Europe, have suffered power outages for more than a year. They receive 2022 in the shade. More of 4,000 people They have been living without electricity since October 3, 2020, among them more than 1,800 are boys and girls. People are feeling fed up. It is difficult for them to understand how this situation can be prolonged in time living only 13 kilometers from Puerta del Sol. “Many come here to ask, but nobody does anything,” says a neighbor.

Asked by the Three Wise Men, she replies: “I took a toy truck from my three-year-old grandson. He opened the package and could not see it because we are without power. I had to turn on two flashlights to make him see that it was true, “he adds. Is named Vicky Vazquez, is 41 years old and has lived in the settlement for 20 years. “This has been the only gift that the Three Wise Men have brought home,” he adds.

“We will not tire of asking for light, not only to the Kings also to the politicians of the Community of Madrid. That they put us accountants and we pay our bills, “he appeals. As you put the wood in the fireplace, remember that many have claimed for many years that install meters and issue contracts, a claim to which the Ombudsman joined last November.

According to the Naturgy electricity company, the cuts were caused by a rise in tension in illegal marijuana crops. “The most outrageous thing is that in this part where there is drug they have light, but they punish humble families and especially our children ”, she clarifies angrily. “They treat us like animals. This is like any neighborhood in Madrid, there are good people and bad people ”, he assures that they pay just for sinners. “I have hope. Sure I do. They have to give us back the light, ”says Vázquez.

“Now we spend a lot more. My husband has been looking for firewood all day. We can only be in one room, since the rest of the house is freezing. ” They have a generator that they turn on for a couple of hours when it gets dark and that’s when they take the opportunity to recharge their cell phones and prepare dinner. “On Christmas Eve we go to bed at nine in the afternoon. We had something to eat and sleep very early because we couldn’t afford to add more gasoline to the generator, ”he explains.

In the bathroom he has a small flashlight. The taps are thirsty. Without light, there is no water. “We have 3,800 liters of water a week, but it does not come without electricity.” He has wounds on his hands and since last October they have prescribed antidepressants: “I have anxiety, we are at the limit. I would like to invite all the political leaders with their children to come and spend a few days with me. I am sure that then they would put the light on us ”. Show the rest of the house with pride. He has everything well placed and boasts that he painted the walls: “In another life I would be an artist. I like drawing and painting. This is my home. We’ve been here our whole lives. Here we have our life and here we want to stay if they give us an alternative”, He affirms forcefully.

“I would like to invite all the political leaders with their children to come and spend a few days with me. I’m sure then they would put the light on us“

Between stigma and grief

In that unseen Madrid, live young people like Cristina who is 17 years old and the current situation weighs on her: “I can’t listen to all the music I would like on my mobile or chat with my friends because I have the device’s battery hours counted” . His life turns off when the mobile is turned off: “This is very boring.”

Furthermore, outside the settlement, he faces stigma and rejection. “I say that I am from La Cañada and the cross is already there”, it states. He has stopped inviting friends from abroad to his house. This is one of the main problems faced by the inhabitants of La Cañada. “It is a very unknown place for outsiders,” he reaffirms. Miguel Angel Cornejo the person in charge of Cáritas projects in Cañada Real. In fact, his purpose this year is “to make known to those who are not from here what this is”. Remember that the deliverers of large companies do not arrive here and that there is a lot of rejection. “It causes stigma or punishment”, Add.

A year without electricity in Cañada Real: “We are isolated, I can no longer live”

The innocence of children makes them somewhat more unaware of the reality that surrounds them. “They live it naturally because they were born and raised here,” recalls Cornejo. Are 1,813 boys and girls who are affected by power outages. Apart from the difficulties that come with doing homework, what they cannot bear is the impact of winter: “The mothers who come here tell us that they prefer the cold to the rain. They see that it is more difficult to warm up if the clothes get wet or if the houses leak ”.

“The situation is extremely complicated. I am not optimistic that it will be resolved. From time to time signals are given and it seems that there is an intention to solve the problem of light. But the solution does not arrive. Recently the commissioner of La Cañada met with the neighbors and they talked about the fact that for the moment the electricity will not return ”, analyzes Cornejo. According to the neighbors and the NGOs all the electrical lines would have to be changed, the installations in the houses would have to be done and there are many parties that should agree.

The six sectors are spread over Coslada and they cross municipalities of Madrid and Rivas to Getafe. In addition, “if the long-term objective is to relocate the population, it does not make sense to make such a large investment,” adds the head of Caritas. The former Acting Ombudsman before leaving showed his “grave concern” about the situation in La Cañada in a 10-page resolution in which he also called for an urgent solution to the arrival of winter.

“I’d rather go hungry than have no light”

For more than a year without electricity, the residents of the settlement have not stopped raising their banners with “Luz para la Cañada”. In October they constituted the Civic Support Platform for Light in Cañada Real, made up of more than 50 civil society organizations together with neighborhood and community associations. “I’d rather go hungry than have no light”, assures a neighbor.

The inhabitants of the settlement have reported this situation to the Community of Madrid, the Madrid City Council and the Rivas City Council. His cause reached the High Commissioner against Child Poverty, the European Parliament and of course the government of Spain. They have filed lawsuits at the offices of Naturgy, the company that supplies electricity in the area.

Although power outages mostly affect Sector 6, which is the largest and most populous, Sector 5 also faces intermittent blackouts. “There the neighbors have managed to agree. They alternate so that the light did not jump ”, explains Cornejo. Thanks to communication and community organization defy power outages.

Israel Vargas He is 30 years old and he opens the doors of his house to us to show the papers that his grandfather had who lived in the Cañada Real. The settlement began to be inhabited from the sixties. His grandfather paid taxes: “I have bills from when he paid his taxes and bills”, indicates among all documentation. He doesn’t take off his coat. “We sleep shivering and this is not normal. I cannot afford a rental in Madrid ”, he assures. He teaches several family houses, there are three generations that have lived here and this is the place where he has seen his children born.

“If they relocate us, we would accept it, but this is our home. I don’t know life outside of here and with light I lived with dignity ”, he adds. They are concerned about the situation of the most vulnerable. The rights of the elderly and children are not guaranteed under these conditions. “What hurts me the most is that my children cannot go to school and they will be illiterate like me,” interrupts his wife. Tamara jimenez. The little ones don’t have dry clothes every day to go to school: “I have to wash their faces with cold water and there are days when the clothes haven’t dried. Here you wash by hand and it takes many days for the clothes to dry. The children are all constipated ”.

“If they relocate us we would accept it, but this is our home. I do not know life outside of here and with light I lived with dignity“

The horizon of rehousing, still distant

Passing a bridge begins the unpaved part of Sector 6. There are still some families living, however, many in this part have been relocated. Debris and collapsed huts are visible. It would be the dream of a majority. “The conditions for relocations are strict and very specific. For example, it would be for people registered since 2011. What will happen to the rest? ”Asks the project manager at Cañada Cáritas.

In mid-November, the Executive Committee of the Pact for the Cañada Real Galiana – made up of the Government Delegation, the three city councils of Madrid, Coslada and Rivas Vaciamadrid and the government of the Community of Madrid – established a roadmap with 21 actions which includes the relocation of 160 families from Sector 6. Over the next two years, it is expected to reach 300 families of the more than 800 that now live. The objective agreed between the administrations is for Sector 6 to disappear.

“This year we haven’t even put up a Christmas tree”says Tamara. It has no light to illuminate it. Here the only gifts that have arrived this year have been those of the NGOs. There has also been no parade due to the pandemic.

As we move away, what breaks the silence and darkness are lights powered by solar panels that illustrate messages. An initiative, for the second time, by the artistic collective Boa Mistura. Christmas lights that speak on behalf of the community: “Luz para la Cañada”, “We continue fighting”, “We are still in the dark” or “We want contracts”. Lights that speak, pray and remember that there are 4,000 people who are still waiting for a solution.