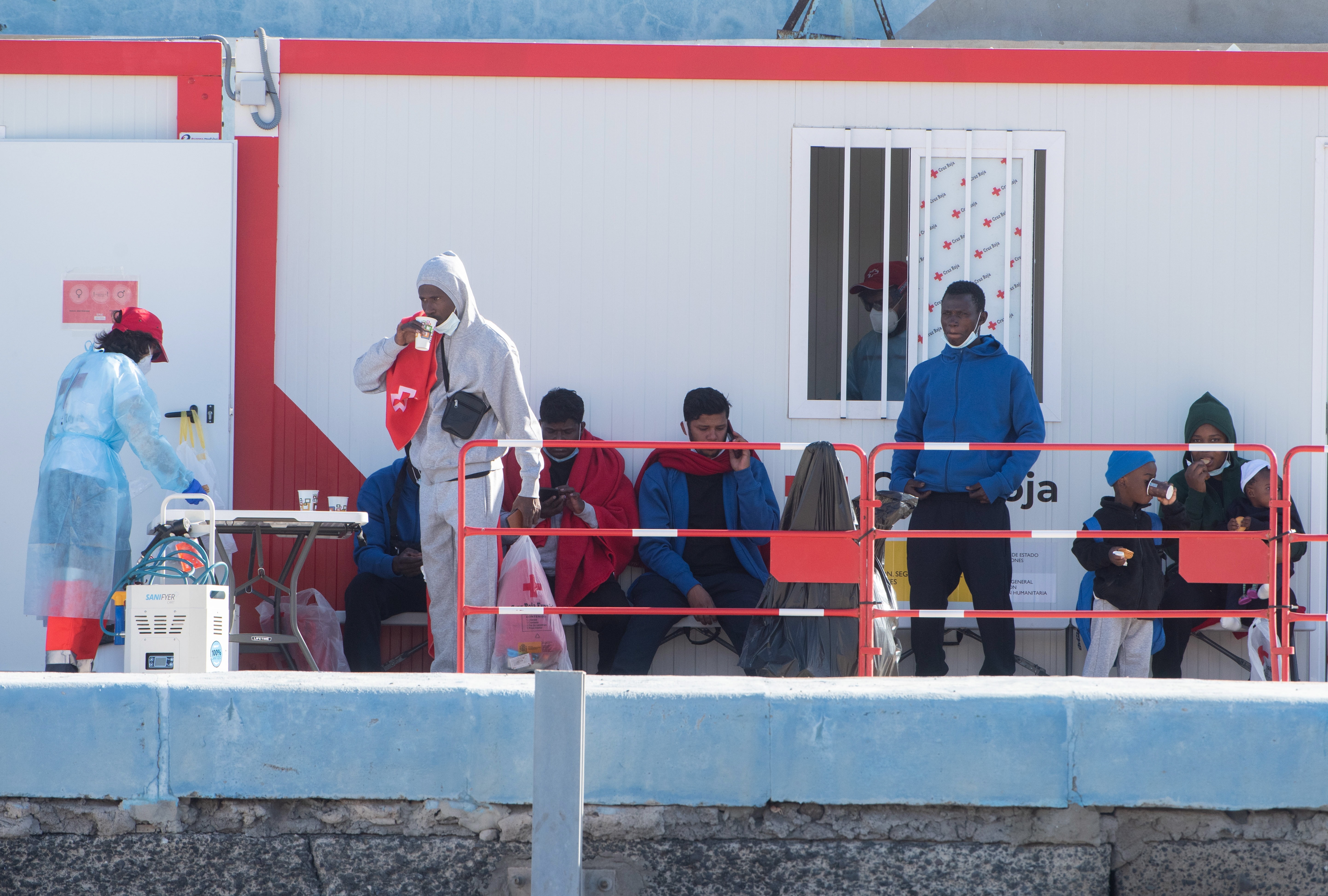 Three people have died in the wreck of two boats 15 miles southeast of Cabo de Gata, in Almería, as reported on Monday by Salvamento Marítimo. Agency sources have explained that they have managed to rescue 16 survivors, all of Maghreb origin, but that there are another ten missing people. A helicopter and patrol boats of the Civil Guard have participated in the search device, whose work has been interrupted at nightfall on Monday and will resume tomorrow with reinforcements. 134 people have arrived in Almería so far this year, encouraged by the high temperatures and good weather, as is also the case on the Atlantic route to the Canary Islands: another 379 migrants have reached the archipelago in the first three days of 2022 This dangerous route was the most used in 2021 to reach Spain by sea: 22,200 people did so, according to data from the Ministry of the Interior until last December 28, 2% less than in 2020. It is also the one that accumulates the most disappearances. The NGO Caminando Fronteras has counted 4,016 disappeared on the trip to the Canary Islands last year, double the number in 2020, in a report made public this Monday and that has been prepared with information collected from testimonies of the occupants of the boats themselves, relatives of those who travel and migrant communities.

It was the merchant ship Spica the one that, at about 1.15am last morning, sighted a group of people in the water on the high seas and without there being any boat in the area. After being alerted, the Maritime Rescue team mobilized the Salvamar Spica and to the helicopter Helimer 223 who, in coordination with the Civil Guard patrol boats, went to the area. There they found 16 people – 15 women and one man – still alive, as well as three bodies. The migrants were traveling in two boats, one of which was semi-submerged and the other completely submerged. The rescued say that a total of 29 people were traveling in them, hence the rescue teams continue to search for ten disappeared – including a 17-year-old girl, according to the Red Cross – with the support of the Civil Guard.

The survivors were transferred to Almería, the usual destination for boats arriving from Algeria. Three of the rescued people entered the Torrecárdenas hospital due to the symptoms of hypothermia they suffered, while the others traveled to the Port of Almería to be treated by the Red Cross. Sources of the entity affirm that since January 1, 134 people have reached the Almeria coast in 14 boats, to which are added another 178 arrivals on December 30 and 31. Also that new arrivals are expected during the next few hours. “We have activated psychosocial help to care for the families of people who fell into the water and did not come out,” explained Francisco Vicente, provincial coordinator of the Red Cross in Almería, who stressed that there are between 50 and 60 volunteers working day and night to attend to migrants.

The means for the search for the disappeared have withdrawn this Monday, with the sunset, without success. The helicopter Helimer 223, jnext to Salvamar Spica Y Algenib The works will continue this Tuesday and will have reinforcements thanks to the incorporation of the ship Maria Zambrano, whose arrival in the area was expected for the night of this Monday, from Malaga.

Salvamento Marítimo also rescued 51 people on Sunday – all men of Maghreb origin – who were in an inflatable boat in waters near the island of Lanzarote. All were transferred in apparent good condition to the La Cebolla dock, in Arrecife, where the medical device formed by the Red Cross and the Canary Islands Emergency Service (SUC) was waiting. In total, in the first two days of the year the Canary Islands have received 379 migrants, who have arrived on board seven boats: four to Lanzarote, two to Gran Canaria and one to Tenerife. The figures maintain the trend of the last two years, in which the Canarian route has become the main sea route for irregular immigration. Until December 28 of last year, 22,200 people arrived in 540 cayucos, a similar figure to the 22,680 in 2020, according to Interior data.

“Maritime Rescue is one of the best services in the world, we must fight so that its service is not withdrawn, but is reinforced so that they continue to save lives,” said Helena Maleno, founder of Caminando Fronteras, an organization that has presented its report Monitoring the right to life on the western Euro-African border corresponding to 2021. The document reflects that last year 4,404 people disappeared on the access routes to Spain – among them, 628 women and 205 minors – which means more than double the number of the previous year (2,170 people) and five times more than in 2019 (893). The majority of deaths occurred on the Canarian route, which totaled 4,016, to which 191 are added on the journey from Algeria to the peninsula, another 95 in the Alboran Sea and 102 more in the Strait. The victims belong to 21 countries – most of them African, but also from places like Iraq, Pakistan, Yemen or Sri Lanka – and only 5.2% of their bodies were rescued. 94.8% of the rest have disappeared at sea.

For Caminando Fronteras there are several aspects that influence the Canarian route to register such a high number of missing persons. The main one is the great distance between the exit points – especially Mauritania, Senegal and the Gambia – located more than a thousand kilometers from the archipelago. Many of the boats go into the ocean to avoid the patrol boats and sometimes lose their way, according to the NGO, which counts 20 cayucos missing. An example of the complexity of the trip is that two of these boats arrived on the Caribbean coast: one reached the Turks and Caicos Islands and the other to Trinidad and Tobago with the corpses of migrants who left from North Africa, more than 6,000 kilometers away. away. The organization has also detected the growing use of inflatable boats for this complicated journey. A third of them were shipwrecked, mainly due to their poor condition.

Maleno explained that the data on deaths offered by Caminando Fronteras come from what he calls “primary sources.” In other words, people who call the Caminando Fronteras alert telephones from the boats themselves during their journey. In other cases, it is the relatives of people who have disappeared during their journeys who call to request information. The information collected from the analysis of each case has revealed that 4,404 people died on their journeys during 2021, almost four times more than the number offered by the International Organization for Migration (IOM), where 1,239 deaths are collected. The IOM, of course, warned this year that the figure could be “much higher” because not all shipwrecks are reported. Frank Laczko, director of the agency’s Center for Global Data Analysis on Migration, said in September that the actual number of lives lost on the high seas is probably much higher. “Invisible shipwrecks, in which there are no survivors, are believed to occur very frequently on this route. But it is almost impossible to verify them ”, he assured.