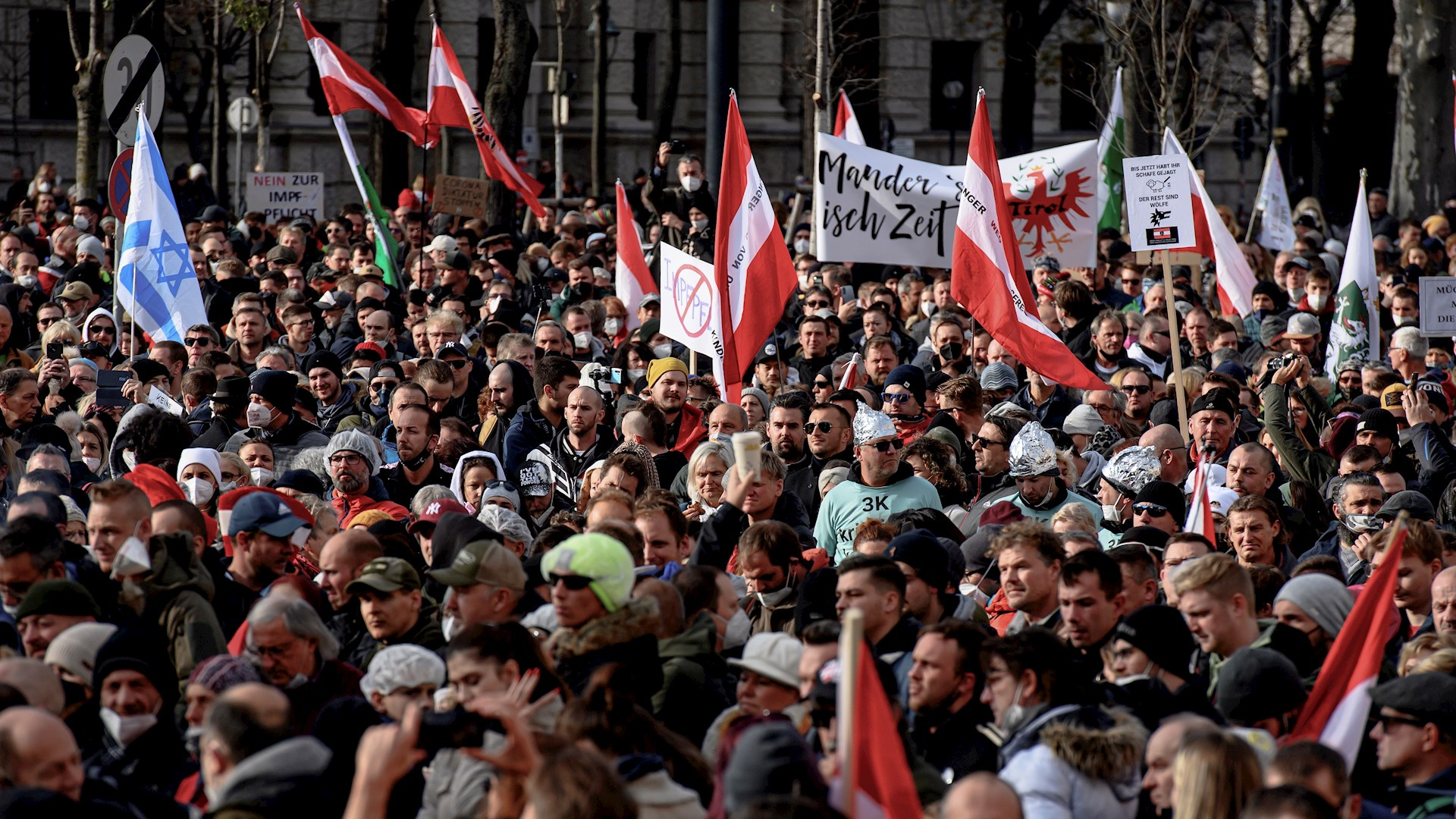 Tens of thousands of people – about 40,000, according to the police – many without masks and without maintaining a safety distance, have demonstrated this Saturday in Vienna, Austria, against the new general confinement that begins on Monday throughout the country and the Mandatory vaccination against COVID-19.

The demonstration was called by the far-right party FPÖ, although its leader, Herbert Kickl, has not come to be in Nuarentena after testing positive for coronavirus.

“Resistance”, “Corona-Fake”, “Freedom” or “Down with the crown dictatorship” have been some of the slogans of a crowd that has converged from different parts of the city in the historic center of Vienna, near the seat of the Government. The protesters have marched through the streets carrying Austrian flags, messages denying the existence of the disease and against vaccination and, in general, calling the rdictatorial coronavirus strictures.

Although the protest has developed peacefully, the police have informed Efe of at least five arrests in isolated incidents such as throwing bottles and other objects at the agents. There have also been complaints about the use of Nazi symbols, which is a crime in Austria.

The Police have deployed a large device with about 1,300 agents, who have monitored the mandatory use of masks and have carried out random checks of the COVID certificate -which proves to be vaccinated or to have passed the disease-, since in Austria a confinement for the unimmunized has been in force since last Monday.

“I am not vaccinated and will not be forcibly inoculated. It’s my body and it’s my decision“

The FPÖ has promoted the protest from social networks, where Kickl, a former interior minister who has argued that the coronavirus can be treated with an animal dewormer, ibuprofen and vitamin C, has encouraged the protest to defend “freedom” and avoid “dictatorship.”

See also  Pub boss, 58, raped eight-year-old girl and threatened to kill her if she told anyone

The FPÖ, the third parliamentary formation of Austria With a 20% intention to vote, he has been radically against vaccines and restrictions to prevent infections. Michael Schnedlitz, secretary general of the training, assured thousands of supporters this Saturday that he was neither vaccinated nor would he allow himself to be forcibly immunized.

“I tell you that I am not vaccinated and I will not allow myself to be inoculated by force. It is my body and it is my decision,” he said in an intervention in which he criticized the Government for wanting to silence them and have them subjected as if they were “subjects.”

65.7% of the population has the complete vaccination schedule

The Government announced that as of February vaccination will be mandatory for residents in the country.

65.7% of the country’s population has the complete vaccination schedule, one of the lowest rates in Western Europe, while the seven-day incidence is among the highest in the continent, with more than 1,000 per 100,000 inhabitants.

In the ICU there are already more than 500 patients and in the hospitals of the two most affected regions – Salzburg and Upper Austria – doctors have already warned that if the situation does not change, they may start having to do triages.

The Government has imposed a general confinement as of Monday to reduce the number of infections, which this Friday marked a record with more than 15,800 in a country of 8.9 million inhabitants.

See also  Why it's never been a better time to start investing: Indy

There has also been demonstrations against restrictions in other European countries, such as Croatia and the Netherlands. In the first, around 15,000 people have protested in the center of Zagreb against government measures to reduce infections. Meanwhile, in the Netherlands hundreds of people have protested in various cities, after last night’s riots in Rotterdam, where at least two people were wounded by gunshots and 51 were arrested.