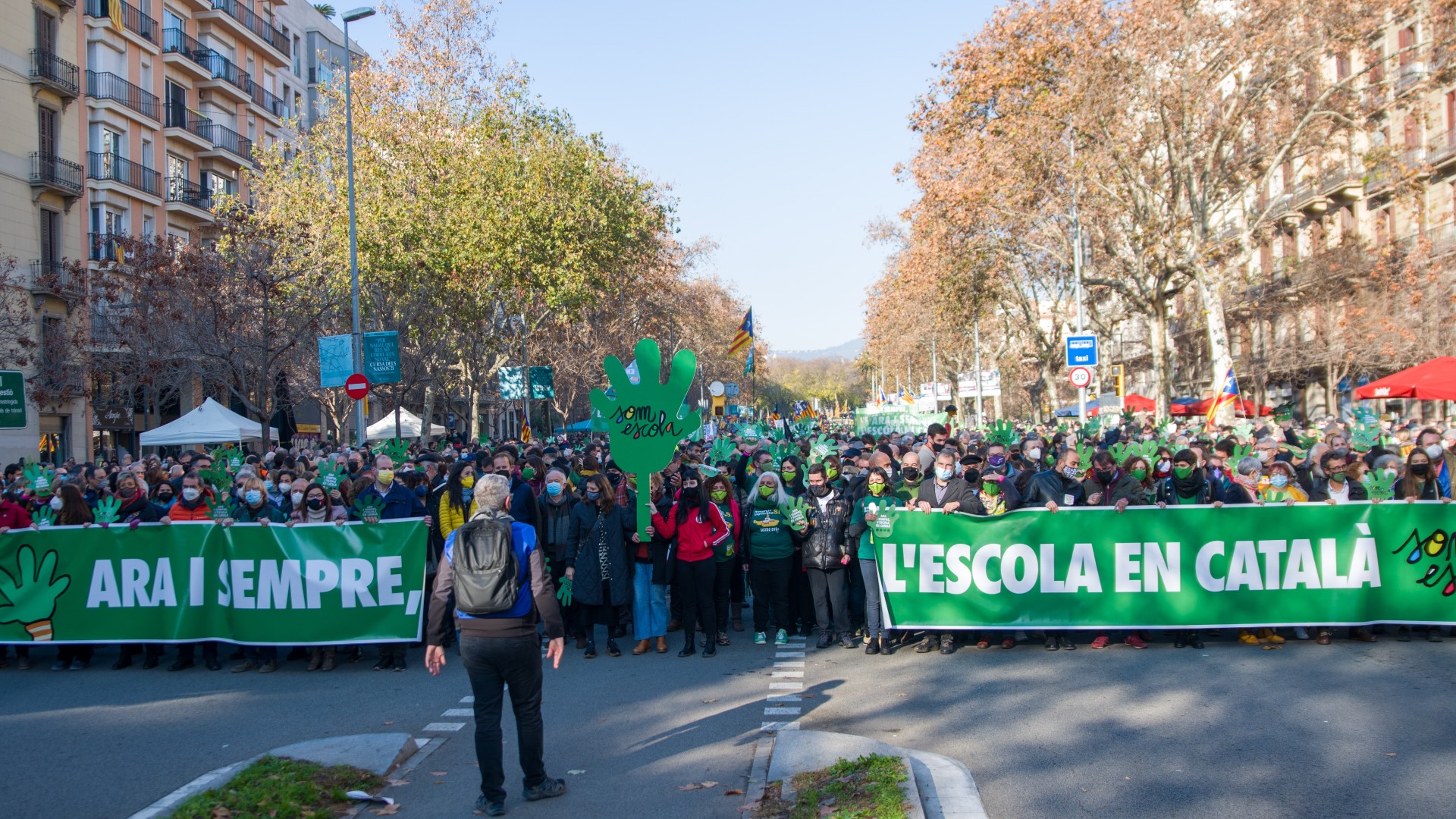 Thousands of people have manifested this Saturday in Barcelona, convened by the Somescola platform in defense of linguistic immersion and the model of the Catalan school and against the sentences that oblige several schools to teach at least 25% of their classes in Spanish.

The demonstration began after 11.30 am on Passeig Sant Joan in the Catalan capital and ended a little over an hour later on Passeig Lluís Companys, after the Arc de Triomphe.

Aragonese has warned that there is “a offensive of Spanish nationalism who wants to use Catalan schools, wants use the future of Catalan and Catalan male and female students, wants to use the social cohesion built in the last decades, to get four votes, not in Catalonia but outside of Catalonia. “For this reason, he has demanded” all those who want to use “the Catalan school for their interests” that “not touch “.

Laura Borràs has affirmed that the Spanish State “does not dominate the language of diversity and wealth” because it only dominates “that of imposition”, while Jordi Sànchez (JxCat) has asked to work “with intensity so that the language leaves the courts.” “Leave the school alone, leave the teachers alone, the entire group of teachers who work every day to make schools a space for social cohesion,” he claimed.

While, Jéssica Albiach (En Comú Podem) has stated that “in the face of the atrocities and the lies of Pablo Casado, this is the best answer we can give, which is that of a Catalonia that is united in its consensus.” For Albiach, the march is an endorsement “of the Catalan public school model, a model that is successful and that is also the patrimony of the popular classes of our country and of inclusive Catalonia.”

ERC spokesperson, Marta Vilalta, has assured for his part that the Catalan school is “the main consensus in the country”, and has accused the courts of “wanting to act as teachers” and the right-wing parties of “fomenting hatred” to get “four votes” , and the CUP deputy in the Parliament Carles Riera has warned the Government of the Generalitat that “half measures” are not useful in defense of the Catalan school, and has asked it to take “firm measures” in this regard.

They ask “that sentences not be followed”

Iolanda Segura, national spokesperson for the USTEC union, the majority in the public education sector in Catalonia, has asked to “defend the Catalan language” and not to comply with the sentences that establish that in certain schools 25% of classes are taught in Spanish. “We ask a lot of firmness, courage, that these sentences are not followed. It is useless to put measures to minimize its impact. These sentences do not have to be followed, they do not respond to any pedagogical criteria, “he demanded at the beginning of the demonstration.

See also  "I will never release a movie on a platform"

Throughout the route, the protesters have displayed green banners with the slogan “Ara i semper, l’escola en català” (Now and forever, the school in Catalan), and with proclamations in favor of immersion, as well as pro-independence flags.

The Government, through the Minister of Transport, Mobility and Urban Agenda, Rachel Sanchez, has wanted to send a message of “tranquility and commitment” and has warned in an interview on Channel 24 Hours of TVE that language “is an element of wealth” and never of “confrontation and division”.

“It is Government intends to get away from that noise that others intend to make“added Sánchez, who has called for” respect for judicial decisions “and appealed to the” responsibility of the political forces “so that they do not use language” as a weapon but rather as an instrument of cohesion. “