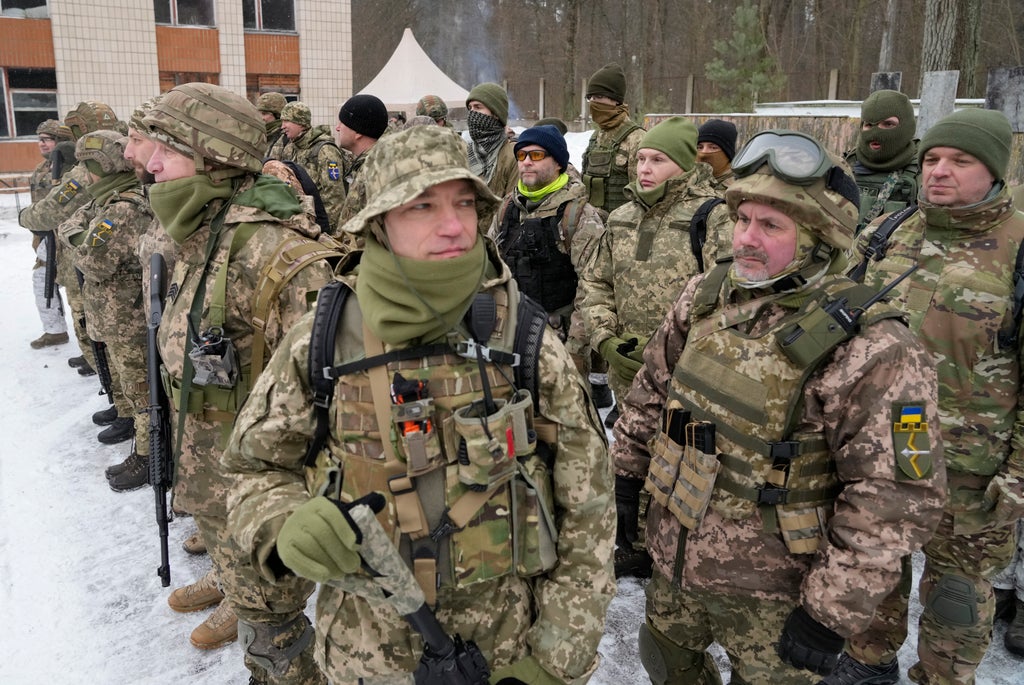 Thousands of Britons are being urged to flee Ukraine immediately over growing concerns that Russia could launch an invasion in the coming days.

The Foreign Office updated its advice on Friday evening to urge UK nationals to “leave now while commercial means are still available”.

The order was issued as intelligence and advice from experts on the ground suggested an increased threat level, with an invasion at some point deemed highly likely, the PA news agency understood.

It came after Boris Johnson voiced fears for the security of Europe during a call with Western leaders including US President Joe Biden.

Defense Secretary Ben Wallace said an invasion could come “at any time”, with Russian President Vladimir Putin having amassed an estimated 130,000 troops on the border with Ukraine.

Mr Biden’s national security adviser Jake Sullivan said an attack before the end of the Winter Olympics on February 20 was a “credible prospect”, assigning it a “very, very distinct possibility”.

He said new Russian forces were arriving at the border and are in a position to “mount a major military operation in Ukraine any day now”, which could include a “rapid assault on the city of Kyiv” or on other parts of the country.

Speaking from the White House, Mr Sullivan said Russia could choose “in a very short order to commence a major military action against Ukraine”, but stressed the US does not know whether Mr Putin has made a final decision.

Mr Sullivan said the “threat is now immediate enough” to urge Americans to leave Ukraine “as soon as possible and in any event in the next 24 to 48 hours”.

In a call lasting around 80 minutes, Downing Street said Mr Johnson urged Nato allies to make it clear to Moscow there is a “heavy package of economic sanctions ready to go”.

“The Prime Minister told the group that he feared for the security of Europe in the current circumstances,” a No 10 spokeswoman said, in an account of the call that included French President Emmanuel Macron, German Chancellor Olaf Scholz and Nato secretary-general Jens Stoltenberg, as well as EU leaders Ursula von der Leyen and Charles Michel.

Mr Johnson warned that the penalties would be “extremely damaging” to Russia’s economy and urged that allies must reinforce Nato’s eastern frontiers.

Officials believe the number of UK nationals in Ukraine is in the low thousands.

Some British embassy staff and their families were being withdrawn from Kyiv.

Britons were warned by the Foreign Office that they should not expect help evacuating in the event of an invasion.

“Currently there’s over 130,000 troops stationed at readiness or exercising – plus warplanes, plus ships into the Black Sea – on the borders of Ukraine and that is an action that is not normal,” Mr Wallace told a news conference in the British embassy.

“It is beyond normal exercising therefore we will judge that statement on the evidence.”

Following a frosty meeting in Russia between Foreign Secretary Liz Truss and her counterpart Sergei Lavrov a day earlier, Mr Wallace said his discussions with Mr Shoigui had been “frank and constructive”.

While he said that he took the minister’s assurances “seriously”, he admitted he was less optimistic than he had been previously that there could be a diplomatic solution to the crisis.

He said the current disposition of Russian forces meant they could do “a whole range of actions, including an invasion of a neighboring country, at any time”.