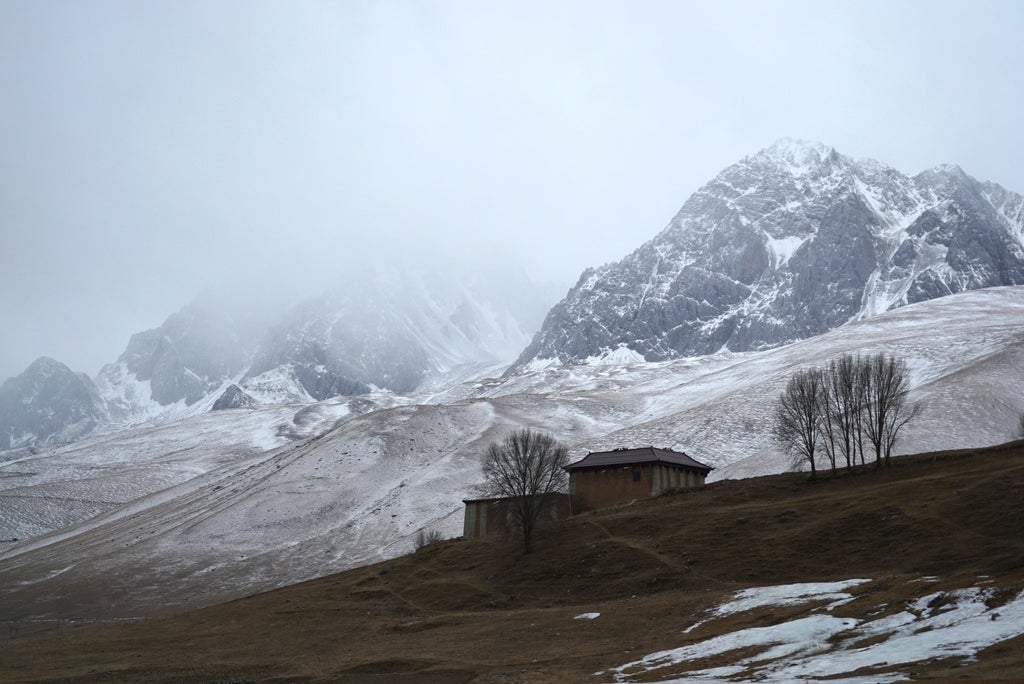 As a speedskating team was winning China’s first Olympic gold medal of the Beijing Games, all seemed quiet in the villages that line the eastern edge of the Tibetan plateau.

It was a stark difference from 14 years ago, when China hosted its first Olympics. That summer, foreigners filmed deadly clashes between Tibetans and security forces in Lhasa, the regional capital. News of the violence ricocheted online, fueling protests, hunger strikes and self-immolations across the Tibetan region.

Today, Tibet has fallen quiet. There are no monks marching on police stations. No overturned cars or hurled stones.

Far more international attention and outrage is directed at Xinjiang in China’s far northwest, where some human rights groups and Western governments say the Chinese government has been carrying out a campaign of genocide against the region’s Uyghur population.

The once-relentless waves of protesters setting themselves afire has slowed down. No self-immolations have been reported in the past two years; over the prior decade, there were more than 150.

That is, at least as far as the outside world knows. In China, where the government tightly controls information and limits access to areas seen as politically sensitive, it’s always hard to know what’s really happening.

And few areas in China are considered as politically sensitive as Tibet.

As the bus carrying an Associated Press journalist traveled through the rugged borderlands in Sichuan close to Tibet, it suddenly ground to a halt.

Police officers filed on board and ordered him off. Even though he had tested negative for the coronavirus three times in the previous five days, the officers ordered him expelled due to pandemic controls.

“No foreigners are allowed in,” said Jampa, the deputy head of Garze county’s foreign affairs office, before ordering the journalist taken by car to Chengdu, the capital of Sichuan, a 10-hour drive away, where he was released.

Why have Tibetans seemingly agreed to Chinese rule after centuries of self-governance and decades of fervent protest and civil disobedience? The answer, based on interviews with more than a dozen Tibetans inside and outside of China, is that in many ways Beijing’s plan to tame Tibet is working.

Old Tibetans remain resentful. But after decades of struggle, many have resigned themselves to being part of China. Younger Tibetans are split: Some still secretly long for independence, while others call themselves proud Chinese citizens.

Abroad, activists continue to agitate for autonomy but now find their calls falling on deaf ears as Beijing uses its economic might to punish countries and companies that voice support for Tibetan independence.

Ever since China’s People’s Liberation Army marched into Tibet in 1951, the region had been locked in a bitter cycle of revolt and repression. Beijing’s harsh controls only prompted Tibetans to cry harder for autonomy, causing ever more severe crackdowns.

As the first Olympics approached in early 2008, and the world’s attention turned toward China, the familiar cycles of protest and crackdown accelerated. That March, five months before the opening ceremony, police beat and arrested monks in Lhasa who were clamoring for religious freedom.

Tibetans turned violent, throwing rocks and setting fire to flags, cars and shops. They killed more than a dozen people, most of them civilians of the country’s majority Han Chinese ethnicity.

State security opened fire. Activist groups reported over 100 deaths while authorities said they were only warning shots. Leaked internal government documents later revealed that at least 26 Tibetans had been killed.

As word of the bloodshed spread, demonstrations erupted across the Tibetan plateau. One day, they came to Drago county, which borders Garze on the plateau’s eastern reaches in Sichuan.

Tsewang Dhondup was volunteering at a monastery when he and hundreds of others witnessed an officer beating a nun. When they rushed forward to confront the police, they were met with gunfire. A bullet went through Dhondup’s stomach.

These demonstrators weren’t the usual rabble-rousers—students and city dwellers with ties abroad. They were herders and farmers, working-class people who were supposed to be the bedrock of Communist Party support.

“I took part because I felt the struggles my family and I were facing shouldn’t be passed on to my children,” Dhondup said from Canada, where he fled in 2012 after 14 months hiding from Chinese police.

After the Olympics, Beijing launched a sweeping campaign to control the hearts and minds of Tibetans.

“People in Tibet have been leading a happy life,” Chinese Foreign Ministry spokesman Zhao Lijian told reporters ahead of these latest Olympics.

Many areas have been targeted for the government’s signature anti-poverty campaign. Billions have been poured into airports, highways, schools and other construction in Tibet. Electricity and subsidized healthcare have come to vast swaths of the region.

Such efforts have helped win support from some young Tibetans, said one Tibetan from a poor, rural part of the plateau, who agreed to speak anonymously in order to be candid. Generational rifts are emerging, as memories of an independent Tibet recede into the past and young urban Tibetans adopt Han Chinese manners and attitudes.

At public schools, the curriculum cultivates a sense of belonging to the Chinese nation. On a state-chaperoned trip to Lhasa last year, foreign journalists were shown a boarding school for Tibetans, where many parents are required to send their children. The students, many of them far from home, studied in Mandarin; Tibetan was relegated to a single class. Hundreds of thousands now study at such schools — a sharp change from a decade ago, when most Tibetans studied largely in their own language.

With jobs and investment come stepped up security and surveillance.

Phones and the internet, once used to organize protests, have become tools to monitor and control. Those who criticize the state or speak up about the Dalai Lama, Tibet’s spiritual leader-in-exile, find their movements restricted. Some are placed under house arrest or imprisoned.

“We’re unhappy, but we don’t dare say anything,” said the Tibetan who agreed to speak anonymously.

He recalled being interrogated, and a friend detained, over a banned book about Tibetan Buddhism that was sent on China’s WeChat instant messaging app.

“We still want to fight to preserve our language, for traditional culture,” he said, “but everyone is scared. Nobody wants to die.”

Gradually, Chen’s measures succeeded in pacifying the unrest. Five years later, he was transferred to neighboring Xinjiang where he deployed the same tactics on a vastly wider and more extreme scale, overseeing a draconian campaign of mass incarceration against the Uyghurs.

Kesang Lamdark, a Tibetan artist living in Switzerland and the son of a renowned monk from Garze, said the dream of a free Tibet crashes against the reality of the Chinese police state.

“If you protest and protest, what’s it going to bring? If they catch you, you’ll go to prison,” he said. “There’s nothing much you can do.”

During these Olympics, the human rights focus has shifted to Xinjiang. Beijing has waged a ruthless crackdown on the Uyghurs, imprisoning an estimated million or more in prisons and detention camps. They government says they are for job-training; former inmates describe them as brutal indoctrination centers.

At times, though, Tibetan dissidents still smuggle out news of arrested monks or images of cultural destruction. It’s a high-stakes endeavor, as the Chinese authorities mete out harsh sentences to those accused of leaking state secrets.

In Drago county, images from late last year of authorities demolishing a 30-meter (100-foot) tall Buddha statue and a monastery school were leaked to the Tibetan government-in-exile. The demolitions were first reported by Radio Free Asia, a US-funded news agency, and confirmed by AP and others using satellite imagery.

Jampa of the Garze county foreign affairs office said he had not heard of the demolitions, and denied any restrictions on faith. Religious freedoms are protected by the Chinese constitution, he said, “like in America.”

It’s true that the authorities have tolerated a degree of religious freedom — unlike in Xinjiang, where many mosques now stand virtually empty after thousands were imprisoned for praying and owning Qurans.

As the car driven by state officials carried the AP journalist through Drago on the way to Chengdu, Lunar New Year lanterns dangled over empty streets. “Skynet” surveillance cameras gazed down on closed shops and restaurants. Looming above Drago, on the side of a mountain, were huge Chinese characters: “Thank the Party, Love the Motherland.”

In a neighboring county, five soldiers in camouflage marched down a street. Village roads were manned by officials checking papers, and the drive passed at least a half-dozen police checkpoints.

Arriving in the Tibetan quarter of Chengdu, where tens of thousands of Tibetans live under the state’s watchful gaze, officers with pikes and batons stand sentry while police lights flash red and blue. Checkpoints and cameras line the roads.

Here, many young Tibetans are forging a new bicultural identity—one that celebrates their culture without challenging Beijing’s rule. It’s evident in a plaza where crowds gather each evening, dancing to Tibetan tunes infused with Buddhist mantras and set to a thumping beat.

“I am a true Tibetan, and at the same time I am also a true Chinese,” said Kunchok Dolma, 28, a Tibetan in Chengdu who is a devout Buddhist and also teaches modern dance in flawless Mandarin. “There’s no conflict between these things.”

She is bothered that Tibetans can no longer obtain passports, by job postings that openly bar Tibetans from applying, and by restrictions on travel to Lhasa. But, given the region’s troubled past, she largely accepts state policy as being for the greater good.

“When we’re treated differently, I do feel like it’s rather unfair,” she said, “but I understand why it is the way it is.”