Skip to content
Home News this is how society is “mutating” 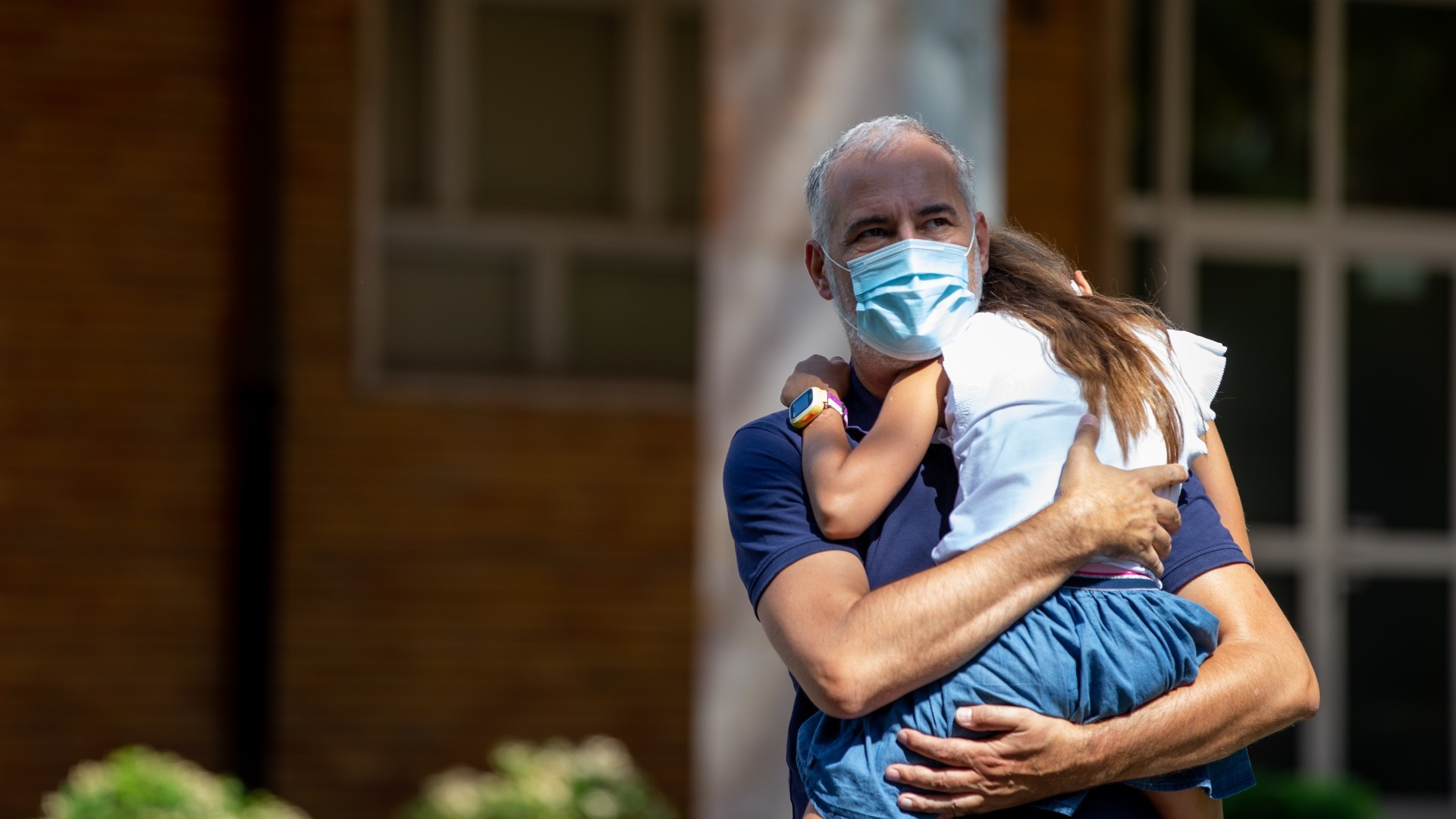 It is not only COVID that mutates. The sensations, emotions, worries and states of mind that its existence generates also change, while the pandemic continues to extend in time: from fear to exhaustion, from exhaustion to frustration, from frustration to exhaustion and satiety, it seems, to collective exhaustion.

Each state will have, in turn, had different variants depending on individual experience and, although the vaccine has spread hope in 2021, the truth is that the year has ended without calm. The waves are already counting on both hands and, far from releasing the 2022 calendar with a clear sky, the rain of Christmas contagions unleashed by omicron could catch us again with the leaky sanitary umbrella.

“People are very tired of all this. It seemed that we had approached the reality before the pandemic and we returned to the infections, the measures, the classes of the confined ‘little ones’, the concern, the quarantines … In families there is a lot of confusion. We have been living like this for almost two years and, although all we have gone through different phases Starting from the fear of the beginning, the most widespread feeling right now is that of being fed up because we do not know how long we will be like this, “summarizes the psychologist Alejandra García Pueyo, who specializes in family therapy.

That perception about the unrest generalized is also shared by Alberto del Campo Tejedor, anthropologist and researcher at the Pablo de Olavide University:

“We had enormous faith in the State, which always protects us, and in science, but that faith is undermining when time goes by. We are now realizing that we have been around for almost two years and science, the State, money, capital, are not capable of controlling all contingencies. This, which is something natural, it seems that we had ignored it (…) We live in a society of immediacy and impatience, and we transfer that gaze to other areas; We require immediate solutions for everything and not having them this time has led to society is very frustrated with waiting“, he says.

Silvia Álava, a health and educational psychologist, believes that this frustration and fatigue are “becoming chronic” in society and affirms that many people are perceiving the sixth wave as “a throwback to the starting box”, although they know that there has been an improvement compared to the previous year due to vaccination and the decrease in deaths: “Christmas has been one more point. We had imagined a different Christmas from last year and again they give us a blow that generates more frustration and that adds to the exhaustion already accumulated. ”

The continuous ups and downs, linked to uncertainty what causes the “not seeing the light at the end of the tunnel”, adds Álava, “they end up taking their toll when they don’t have tools to manage their emotions.” That is why it is so important, he says, May 2022 continue to focus on mental health and that it is normalized among society to ask for psychological or psychiatric help when necessary.

A more “heterogeneous” “state of concern”

Del Campo, also editor of the book Daily life in times of COVID. An Anthropology of the Pandemic, in which different researchers participate, states that he has noticed some changes in society compared to the beginning of 2021, which was just when that work was published.

First of all there is, he explains, a more “heterogeneous” “state of concern”. That is to say, there is no longer only “fear of dying or not being able to pay the loan of a bar”, there is also concern in many parents about how social deprivation is affecting the mental health of their adolescents or how it can harm the situation to the development of children.

“In many little kids who were born or who are living their first years in the middle of a pandemic, I notice an increase in shyness, more difficulty in managing emotions and in language development. For them everything is being different. Before, children saw their teachers gesticulate or laugh and now they cannot relate the same (…) AND we start the year again with more concern among adults and with possible measures in classrooms. These changes they also confuse them, that they have to continue playing and relating “, points out García Pueyo in this regard.

In the young population what there is, experts say, is a lot of apathy, demotivation and anxietyStates that should be stopped as soon as possible and that could continue to gain ground if general restrictions continue to be announced without taking into account how they influence the different life stages.

On the other hand, Del Campo points out that it is now when the pandemic begins to be faced as “something more in the medium term” and not as a problem that has a near end. “Most of the people a year ago told us ‘let’s not worry, we already have a vaccine’, and they considered that this would not last more than a year. When they have seen that it is going to take a long time they are beginning to meditate if it is reasonable, for example , having a 90-year-old grandmother locked up for three years or as long as this lasts (…) This temporal dimension is being introduced into the reflections, there is a change, “says the anthropologist, who stresses on several occasions the importance of citizens having” escape valves “to avoid greater evils.

The latter exemplifies it in multiple ways, resorting to various historical events that demonstrate, he says, that a society “in collective depression” is “the perfect breeding ground” so that sorrow and apathy germinate, and so that this results in something much worse: “hatred and simplification.”

“We have already begun to see it. We tend to blame the other very easily and simplistic demagogic discourses have appeared. We are very frustrated that we cannot blame someone and we have little tolerance for uncertainty (…) Society has caught us This is very little prepared and it is now, in the medium term, when we see that something has happened to us that was not foreseeable. We had no training with fear, pain and suffering because the last great war we lived through happened many years ago. Most of the people who are alive had not experienced collective fear or suffering like this in such a direct way, “adds the researcher.

Keep living for the day, the only way to face the new year

But what do you do as an individual when you feel frustrated or, “Simply, tired of exhaustion”, as the verse of Oliverio Girondo says? How to face a new year that comes preceded by other hard Christmases and in which, at least at the beginning, it will be impossible to get rid of all the pandemic noise that clouds the everyday?

The two psychologists coincide in prescribing the same guideline: keep living up to date. “We have to live, with measures, but we have to live, and we have to look out for our well-being. Even if we don’t like it, we have to assume that this is the situation we have and we only have to focus on the present,” says García Pueyo. This does not mean, precisely, that you have to stop getting excited about future plans, but it is very important “be careful with expectations” and keep “our feet on the ground”, given that the world continues to go through a very uncertain period.

“Is about stop fighting a situation that does not depend on me and that I can’t control. In other words, I accept that, although I don’t like them, things are like that, and I learn both to regulate emotions that are unpleasant and to promote pleasant ones “, says Álava, who proposes to carry out an exercise:” We can look back and see what concrete things we have done to overcome this situation that in another moment they helped us to feel good “.

Del Campo believes that this society immediately needs “learn to be a little patient “, Which does not It means neither being “benevolent towards the Administration” nor ceasing to be “critical”, but rather understanding that there are not always quick solutions to all problems. Maintaining collective serenity, “naturalizing” mood changes and being aware of one’s “vulnerability”, he believes, will help to better cope with what is happening.

The anthropologist also makes a call to continue protecting oneself in this start of the year without opting for absolute rigidity. Meeting with friends or family, even if the meetings are chosen “strategically”, is essential, he says, so as not to fall into dismay: “The harangues that this is a war are fine, but we are not soldiers. We are social people and it is not a frivolity to want to be in contact with others, it is a necessity to make the pandemic more digestible, especially when it can last a long time. “

To affirm this, he goes back to history because it teaches that, even in the middle of a real battle, the First World War, there was a need to have a break, the one agreed in the famous Christmas Truce.

“We are not soldiers. We are social people, and it is not a frivolity to want to be in contact with others“

Álava concludes with yet another proposal: “What this virus has shown us is that we can’t take anything for granted because everything can change suddenly. Why not we celebrate every day that we are well as if it were Christmas? I mean, every time we can enjoy a coffee with a friend or a family gathering, let’s celebrate. ”

It would be like putting into practice a new version of the famous “do not leave for tomorrow what you can do today”, changing it for a “Do not stop enjoying people today, thinking that you will have them tomorrow”, and it could be confirmed that sayings, such as COVID, such as emotions and moods, can also mutate.