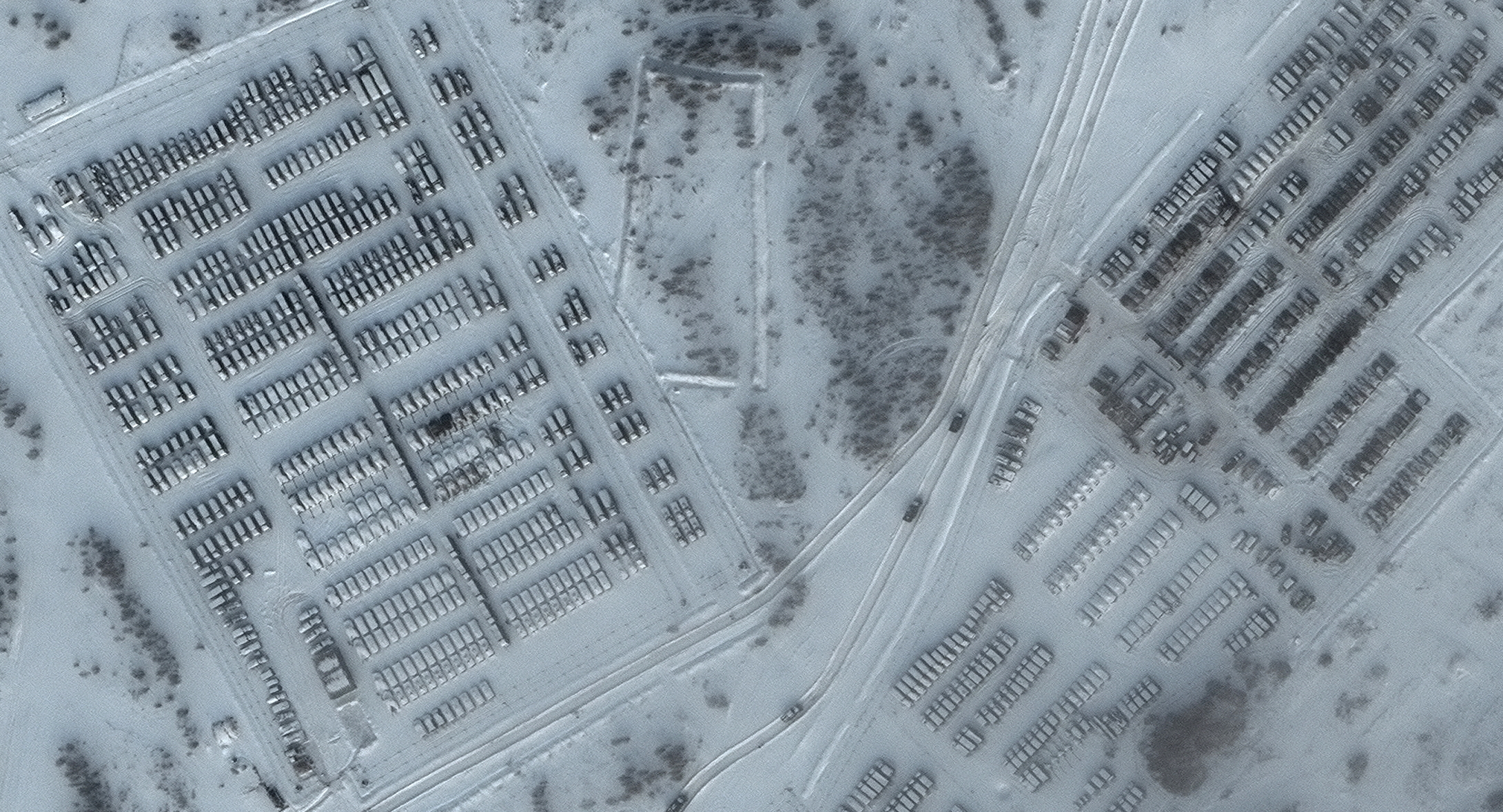 August 2020. Coordinates 54°36′20.5″N 33°09′52.1″E. They lead to the Russian town of Yelnya, in the Smolensk region, not far from the borders with Belarus to the west, a hundred kilometers away, and Ukraine, further south, about 260 kilometers away. Beyond the small Russian city, with just under 10,000 inhabitants, through a satellite image taken by the Maxar company and archived by the Google Earth mapping service, what could be seen with those coordinates that summer of 2020 were simply the barracks facilities of the 144 Motorized Rifle Division. At the beginning of last December, the US Department of Defense warned that at least five brigades of the Russian Army had been deployed there in a handful of months. EL PAÍS has analyzed a selection of photographs taken by the companies specializing in satellite images Maxar and Planet Labs. The heavy weapons units at the military site exceeded 1,500 in January.

Let’s go a little further back. The comparison made by Washington – and which the US press attributed to espionage sources – used images from June and November 2021 to demonstrate how the terrain had radically changed with the appearance of hundreds of military vehicles in two parking lots. The focus was no longer open. The photographs used for this espionage are not so exclusive and are practically within the reach of any Internet user through current geolocation tools, generally free to use, and thanks to the explosion of private companies that convert the samples they collect daily into data. its satellites, as is the case with Maxar and Planet Labs, both with headquarters in the United States.

However, not all mapping systems give the same results. The Russian internet giant Yandex, which also has this geolocation service, maintains in these same coordinates what the satellites showed in 2018. No trace of the current deployment. Yandex is an independent multinational, although it has already suffered pressure from the Kremlin to open up to greater control of the information it handles.

Through the history of images available in the Google Earth tool, it is possible to verify the existence to the north of the town of Yelnya of the barracks of the 144 Motorized Rifle Division. As shown by the changes on the ground and the information available in the local press in Smolensk, this barracks has been restored and expanded in different phases since 2016. In May of that year, precisely, the Russian Defense Minister, Sergei Shoigu, reported a growth in the Russian military presence in the western fringe of the country, towards the Belarusian border, to deal with NATO plans in Eastern Europe. Already at the end of 2018, those facilities had dozens of tanks and military support vehicles.

However, the green blanket that covers the Yelninski district remains unchanged until the second half of last year. An image dated by the Planet Labs satellites on October 12 allows for the first time a glimpse of the ongoing deployment carried out by Moscow. To the south of the 144 barracks and on both sides of a vertex formed by several circulation routes, a camp has been built to house personnel and a parking lot where dozens of vehicles have arrived. The British analysis center Janes has been able to identify in this contingent elements of the 41st Combined Arms Army, part of the Russian ground forces, but with headquarters in Novosibirsk, some 3,000 kilometers away.

See also  Nicaragua: López Obrador assures that he will send a representative to Ortega's inauguration: "We have a good relationship with everyone"

It is between October and November of last year when, according to satellite photographs, the greatest deployment effort was carried out. Through two images of Maxar, one dated November 1 and the other, on the 9th of the same month, with a good layer of snow over the region, it is possible to verify a very significant increase in the construction of the barracks and the arrival of armament. The Center for Strategic and International Studies (CSIS), based in Washington, in an analysis published in the middle of that month, calculated at 17% the increase in “the number of military structures used for storage and accommodation of troops” in just eight days.

CSIS agreed with the Janes center in identifying brigades from the 41st Combined Arms Army, which is part of the Russian Central Military District. But the deployment did not end there. Two more photographs, one from December 29, and another from the 19th, allow at a glance to see how the areas destined to house heavy weapons and even the accommodation of uniformed personnel have continued to grow in new locations or in those already available. For example, the closed parking lot in a sort of rectangle of land to the southwest of the military barracks housed around 400 military units in November, while in January it already had more than 520.

The contingent that arrived in Yelnya, part of the reinforcement from Moscow —it would already have some 100,000 soldiers on its western flank— for a possible incursion into Ukraine, would be formed roughly and based on analysis of razor-sharp satellite photos, by tanks, self-propelled artillery guns, multiple rocket launcher systems, surface-to-air missiles, short-range ballistic missile launchers, and military support vehicles. In total, as of January 19, more than 1,500 of these combat units could be counted north of the town in the Smolensk region. The CSIS has re-analyzed this Thursday the deployment in the last two and a half months and estimates the increase in weapons transferred less than 300 kilometers from the border with Ukraine at 24%-25%.