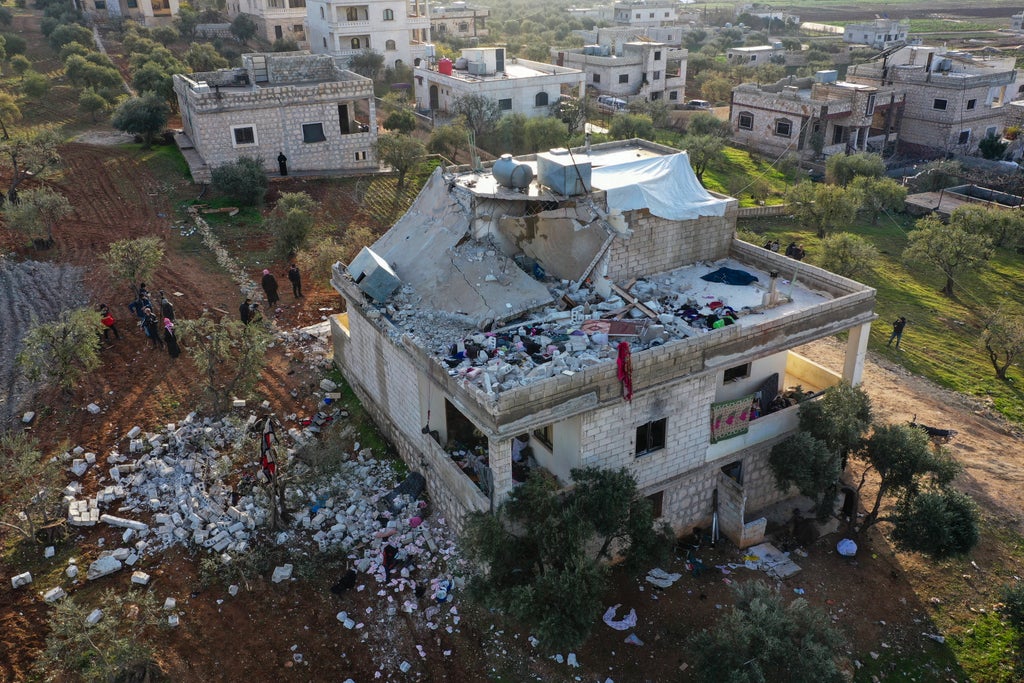 American special forces carried out a “large-scale” counterterrorism raid in northwestern Syria the Pentagon said Thursday, as rumors swirled that the target was the new chief of the so-called Islamic State.

“There were no US casualties. More information will be provided as it becomes available,” he said in a brief statement.

Pentagon provided no details on the target of the raid, or if any enemies or civilians on the ground were killed or injured.

Idlib is home to several top al-Qaeda operatives and senior members of the Islamic State.

Isis chief Abu Bakr al Baghdadi was killed in a Trump-era raid on Idlib in 2019. Rumors circulated on Thursday that the target of the overnight raid was Baghdadi’s successor, the head of the Islamic State, Abu Ibrahim al-Hashimi al-Qurashi. Photos were shared online allegedly showing his corpse.

The opposition-run Syrian Civil Defense, also known as the White Helmets, told The Independent that 13 people were killed in shelling and battle that followed after the US commando raid. They included six children and four women, it said.

They said that the raid went on for three hours and they managed to rescue an injured child whose entire family had been killed in the operation.

Footage apparently taken at the scene in the quiet village of Atmeh near to the Turkish border showed men digging through the rubble of a partially destroyed two-storey house.

In another clip shared online, that was purportedly taken nearby showed rescuers carrying an injured girl.

Residents of Atmeh said that they heard helicopters circling overhead before soldiers alighted and US forces began their raid which resulted in a several hour battle.

In one video shared online, a man who claimed to be a neighbor said that he heard soldiers tell the women and children to leave the house first. They said there were body parts scattered near the site of the raid.

An Iraqi intelligence official in contact with the US-led coalition told The Associated Press that the target was a high-ranking militant leader whose identity will be released by the White House later in the day. The official added that Information suggests he may indeed be al-Baghdadi’s successor.

President Joe Biden is expected to elaborate on details of the raid later Thursday.

The raid was in Syria’s north-western province of Idlib which is largely controlled by Turkish-backed fighters but is also an al-Qaeda stronghold and home to several of its top operatives. Other militants, including extremists from the rival Isis group, have also sought refuge in the region.

Jamil el-Deddo, a resident of a nearby refugee camp told Associated Press that the first moments were “terrifying, no one knew what was happening”.

“We were worried it could be Syrian aircraft, which brought back memories of barrel bombs that used to be dropped on us,” he added, referring to crude explosives-filled containers used by President Bashar Assad’s forces against opponents during the Syrian conflict.

See also  Martin Z. Margulies: "Art made me see that the world was a more interesting place" | Culture

The top floor of the house was almost totally destroyed in Thursday’s raid, with the ceiling and walls knocked out.