The Ertzaintza has archived the disciplinary files open to five of the six agents who were tried in the Iñigo Cabacas case, among which is the only agent who was finally convicted of the death of this young man after being hit by a rubber ball thrown by the Ertzaintza in 2012.

The file of the internal investigation is due to the fact that these five agents are no longer part of the Ertzaintza, as reported by the Security Minister, Josu Erkoreka, who has appeared before the Basque Parliament to report on this matter at the request of EH Bildu.

The MP from EH Bildu Julen Arzuaga, who had started the request for an appearance, has considered “disappointing” and “obscene” that the internal investigation opened into the death of Iñigo Cabacas ends in this way.

Why did they shoot tight shotguns?
Why were the weapons cleaned?
Why are you hiding evidence?

¿¿The Cabacas family, once again humiliated after learning that none of the ertzainas investigated will have disciplinary responsibilities.

The Security Counselor has explained that the only disciplinary file that is still open for these events affects an ertzaina who is among the five who were acquitted in the ‘Cabacas case’, since this is the only one of the agents prosecuted in this case. that is still part of the body.

In any case, and although he has assured that he has no intention of “interfering” in the work of the officials in charge of this internal investigation, the counselor has stated that It is “very difficult” for him to find any violation of the regulation de la Ertzaintza in the behavior of this agent, about whom he has emphasized that he limited himself to “carrying out orders” from his superiors.

At the end of last December, the Supreme Court confirmed the sentence of two years in prison and four years of disqualification for reckless homicide of an Ertzaintza command, although in April the Court of Bizkaia suspended the execution of the sentence, so it did not entered jail.

Six ertzainas were tried and only one was convicted, the one who had the highest rank in command of the police operation. 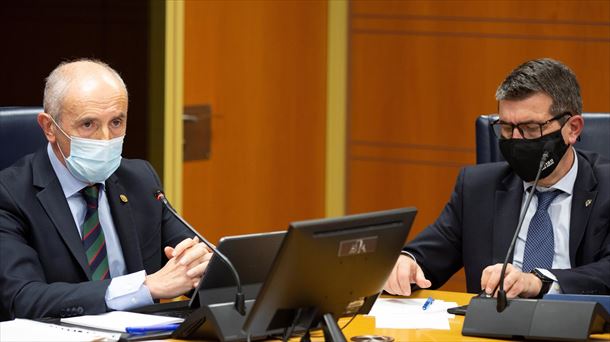 The Security Councilor, Josu Erkoreka, and the Deputy Councilor Josu Zubiaga, during the appearance in committee. Photo: EFE

Cabacas died on April 9, 2012 after being hit in the head by a rubber ball four days earlier in an Ertzaintza charge that took place in a alley of María Díaz de Haro, shortly after a European Athletic match was held in San Mamés.

Once there was a final judgment, the Ertzaintza resumed the internal investigation since during the judicial procedure the law prevents it, and it is about to be closed, the counselor has advanced.

In response to Arzuaga, who has demanded disciplinary measures against the agents involved, Erkoreka explained that the condemned command was discharged from the police force, therefore, since he is no longer a civil servant, he cannot be asked for any disciplinary responsibility.

Of the other five ertzainas tried, four are on leave due to incapacity for work, so their files have been archived for the same reason as the previous one.

Erkoreka has acknowledged that she does not believe that “no one” has fully defended the performance of the Ertzaintza that day and has ensured that “everyone” realized that they had to correct things that “have already been improved.”

In addition, the riot control material that was used has not been used since 2013 and work has to be done, it has continued, so that an episode like this does not happen again.

The representative of EH Bildu has regretted these explanations and the file of the internal investigation because in addition to the judicial ruling the Cabacas family deserves a repair by disciplinary means.

At the gates of the tenth anniversary of the death of Iñigo Cabacas, what measures has the Department of Security adopted?