Skip to content
Home News “There are no antigens from the Community of Madrid”: saturation in pharmacies on the first day of the free test | Radio Madrid 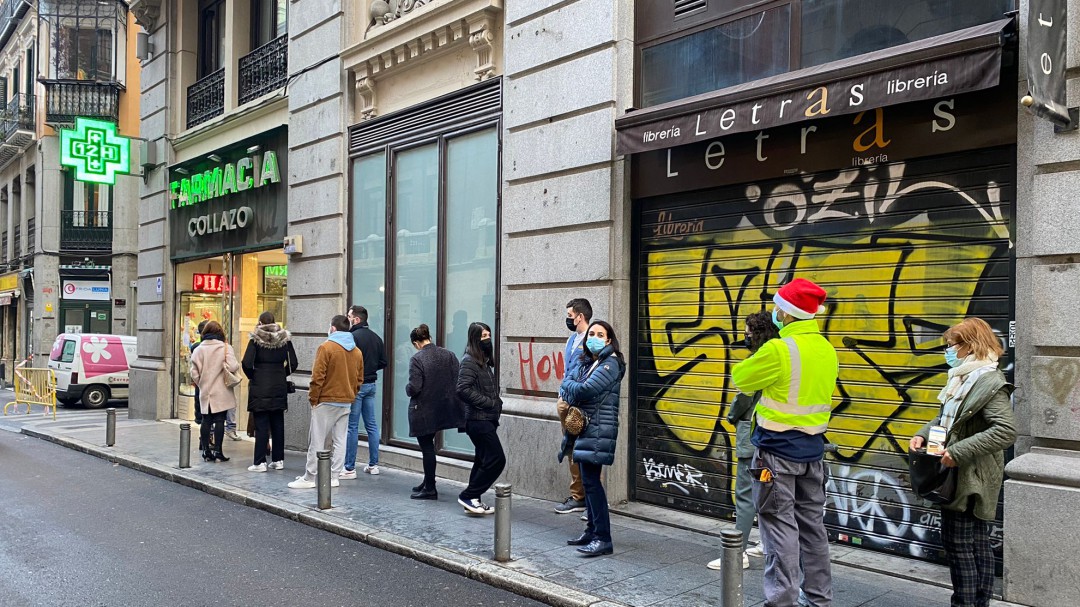 “There are no antigen tests left for the Community of Madrid.” This poster hangs from early in the morning in some pharmacies in the center of Madrid. This Wednesday the distribution of free tests that the president of the region, Isabel Díaz Ayuso promised, officially began, but in some establishments they have been exhausted in record time. In other pharmacies, where they still remain, there are already long lines of customers at the doors and, according to pharmacists, some will be left without their proof because not enough supplies have arrived for everyone. “They have sent us 53 for today, now we only have 10 left,” assured a pharmacist on Madrid’s Gran Vía, who preferred not to give her name. On the street, more than 20 people were waiting.

At the gates of Christmas Eve and Christmas Day, many people from Madrid want to take a test to go safely to family gatherings. This is the case of Manuel, who is going to spend these holidays in Asturias and first seeks to confirm that he is not infected: “I do not want to infect any family member, or put anyone at risk, I want to be calm.” It is the same reason that Marta alleges, who assures that although these tests “are not 100% effective, that is better than nothing.” Others like Maria have not arrived in time to collect their free trial, although they have been visiting various establishments since early in the morning. You have also tried to buy them, but they are gone. “They ask us to do these tests because the health centers are saturated, but then this happens two days after dinner,” he criticized. Most of the people regretted that there was not a better planning in the purchase of these tests to supply the Madrid pharmacies.

This measure, which is developed in collaboration with the College of Pharmacists of Madrid, is launched at a time of increasing infections in the Community of Madrid, which yesterday recorded the highest number of new positives since the pandemic began, with more than 11,000 infected people and with a cumulative incidence on the rise, with 809 cases per 100,000 inhabitants. This scenario has led to growing interest and demand for self-diagnostic tests, which is causing a shortage in pharmacies and a general increase in prices.

In fact, the initiative of the regional government had to be postponed from its initial date scheduled for December 15, until this Wednesday, the 22nd, due to “shortages”, according to the Ministry of Health. With several days late, this Monday finally arrived a first shipment of almost a million tests that will arrive in small doses to pharmacies to distribute them daily. Throughout the week it is expected that another million more tests will be distributed in the 2,900 points of the network of pharmaceutical establishments in the region.

What do you need to collect your test?

People who wish to go for one of these tests can do so simply by presenting the health card of the Community of Madrid. In fact, there are already 6.8 million active tests on health cards. Citizens who do not have identification, such as mutualists, may acquire this diagnostic test by presenting their DNI or NIF. Antigenic tests detect the presence of the virus in both symptomatic and asymptomatic patients 48-72 hours after infection. From the Government of Ayuso they remember that it is advisable that they take this test before attending the meeting, although many citizens will not be able to get one of these tests on time.

Madrilenians who manage to get hold of one of these tests will find inside the necessary instructions to be able to carry it out at home in the safest and most effective way. Results usually take about 15 minutes on average. If the result is positive, the patient with covid must isolate himself, stay in a room with ventilation, move out of it always with a mask, maintain basic preventive precautions and call the Community of Madrid telephone, at 900 102 112, to They explain how to act and can collect your data.