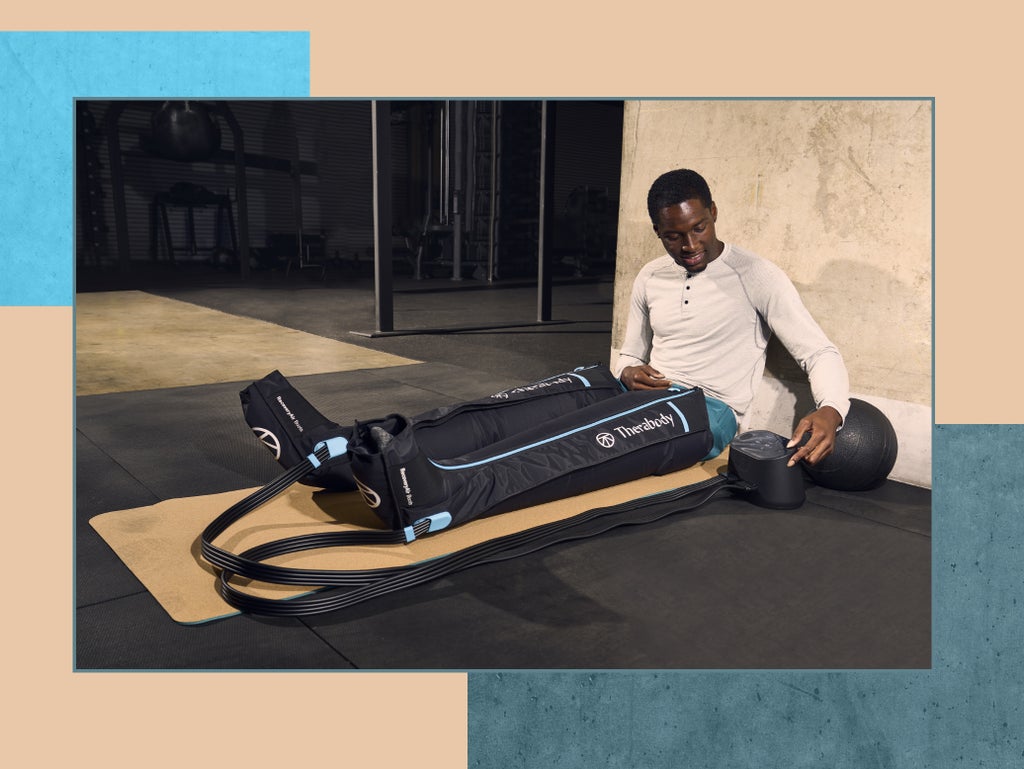 Whichever version of the recoveryair you pick, you’ll be sent a pair of boots that look like the most futuristic thigh-highs you will ever see. They have a zip up the middle, and are made out of luxurious and hygienic material.

On the pro and prime version, they also come with a little box that actually does the work of compressing and lets you choose what kind of an experience you want, picking the pressure as well as the time. You take the long wires that extend out of the boot and plug them in, choose your setting, sit down and go. (On the JetBoots, the unit is built into the bottom of the shoe, like a futuristic platform heel.)

The boots are as chic as a tube of pneumatic compression can be, and would be at home in the most classy of home gyms or living rooms.

But one thing to note is that the boots are fairly sizeable. Even when they are deflated and fold up, they take up a reasonable amount of space. Therabody provides a luxe black bag into which they can be put away, but given that they are best used in a routine, you should be sure there’s a shelf or cupboard to tidy them away but still have them close at hand.

On the inside, Therabody boasts about a whole host of special features that set it apart from the competition, each of which are given trademarked names that can be off-putting but useful to know about. They have “FastFlush technology”, which means they can inflate and deflate more quickly than other boots; “TruGrade technology” that means the separate chambers are more precise in inflating up your leg; as well as pointing to the design of the material and its work with an app.

When you put the boots on, you do of course feel a little ridiculous. Your legs feel strange, too: they are essentially a tube of toothpaste that is being squeezed by a blood pressure monitor, and the sensation is as unusual as that sentence.

They start around your ankles, squeezing them with a force that is tight but not uncomfortable. And then they gradually move up your leg, in four different segments that ensures your calves and thighs are compressed too.

After a few minutes of that, the strangeness wears off and you actually feel the promised effects. Therabody says the compression boots work by encouraging blood flow and stimulating your lymphatic system: encouraging the blood to move from the bottom of your legs up to the top so that any inflammation is dealt with and pain and soreness are gone.

That might all sound a little medical and unpleasant. But the feeling is truly calming. Like a good sports massage, it is not wholly pleasurable but it does feel better.

After half an hour or more, when you get out of the boots, you really will feel refreshed. Soreness is reduced, and – even after our most intense and longest workouts – we were ready to get back at it far more quickly than usual.

For some people, including this reviewer, the big question is how much is really scientifically based, or whether the squishing of your legs just works something like a placebo. The scientific evidence for compression boots of this kind is still young, and points either way; while there’s very scant evidence it would ever do any harm, there are few definitive empirical studies that prove it’s doing a whole lot of good.

There is also some concern that treatments of this kind could in fact hinder your fitness by making you, in effect, recover too fast. The inflammation that happens with exercise is a key part of getting fitter – your body needs the signal to improve for the next workout if your capabilities are going to improve – and so getting in the way of that could potentially cause problems. Again, the science is too young to know for sure, but if you get the boots it might be worth waiting an hour or two after exercise to be safe.

But what is left out of all the discussion of scientific studies and verifiable results is just how good all this feels. Studies tend to discount that – discussion of recovery research sometimes tosses away subjective feelings of getting better as if it is unimportant – but it is surely at least as significant as truly scientific markers of how quickly you are recovering.

Suffice to say, they make you feel very good. While they’re on, the compression helps get rid of soreness; after, we felt more able to get back to exercise more quickly. If that is all the effect they have, then it’s important and very good.

The scientific evidence for it remains scant; in our limited and one-person study of them, it was hard to necessarily say that the metrics on our workouts after using the boots were better than before. But we certainly felt a lot better for having used them.

Even in their cheapest version, compression boots of this kind are still a big investment. You’re likely to get much more meaningful results in other ways that are somewhere between cheap and free: sleeping more, eating better, staying hydrated, and so on.

But that doesn’t mean they’re not worth it – far from it. Even if the recovery air boots only force you to sit down and give over some conscious and intentional time to your recovery, it could be a fantastic investment, and one that you’ll see the effects of not only in your exercise but your whole life.

As such, there’s no reason to feel bad if you can’t afford these boots or don’t see them as a priority when there are many more important things to be spending your money on. But there is every reason to feel good if you get them, and your legs will thank you.