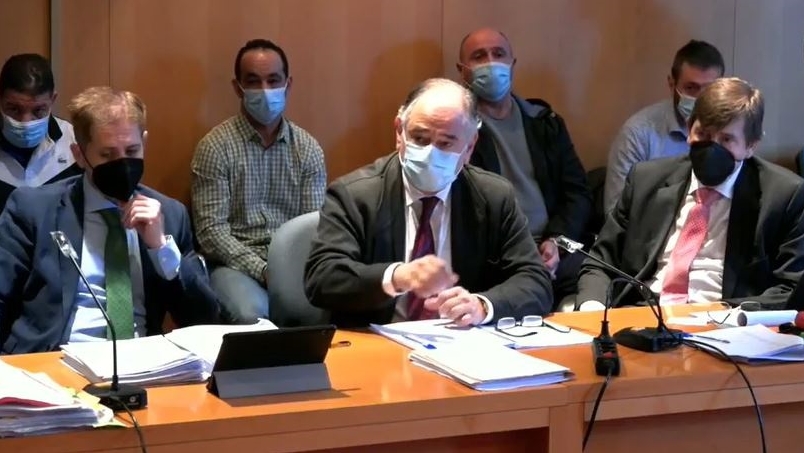 Katia Blanco, the wife of the accused of plotting the murder in 2018 of the councilor of Llanes (Asturias) Javier Ardines, has detached her husband from the crime this Monday, committed after learning that his wife had been unfaithful to the victim for years. The thesis of the investigation, for which the Prosecutor’s Office and the prosecution ask Pedro Nieva and three cronies for 25 years in prison, is that he prepared a deadly ambush with the help of an accomplice and two hitmen. Blanco added that her husband was not jealous, in a statement by videoconference from Bizkaia in the trial held at the Provincial Court of Oviedo.

During the long hour in which Katia Blanco has answered the questions of the prosecutor and the lawyers, the woman has tried to dissociate her husband from the crime. In his testimony, he has incurred contradictions with respect to what he confessed at the beginning of the Civil Guard investigation, when he admitted that he had had relations with Javier Ardines for 30 years. This Monday, on the other hand, Blanco has assured that they barely maintained relationships during their youth and during the last four years, when their marriage with the accused of being the intellectual author of the murder began to crack. Pedro Nieva learned of these dates secretly at the end of 2017, with a recording of a talk between his wife and his friend that made clear the prolonged infidelity, a record that he has defined as “accidental” during the trial, but that the agents of the investigation have indicated that it was entirely planned by Nieva.

This dialogue between Katia Blanco and Javier Ardines, which included phrases that evidenced a long relationship and alluded to their sexual encounters, was for the woman just “a conversation between two adults who are attracted to each other,” as has been pointed out. One of the civil guards who appeared in the previous days, in which the widow and the children of Ardines also spoke to confirm that Nieva knew in detail the habits of the deceased, defined the suspect of the intellectual authorship of the crime as a “desperate man “And” upset “to discover that his suspicions about his wife’s infidelity with his friend were real. Katia Blanco, who is the cousin of Ardines’s wife, has disdained these words and described her husband’s condition after learning the facts as “normal” of “a sorry person” because the marriage was going to break down “after 24 years”. The marriage, three years and five months after the matter at trial, is still together.

The appearing party has presented herself as an independent person, with her own routines and social life in addition to those shared with her husband, and has categorically expressed that he “did not exercise control” over her. “I never liked being controlled, I did what I wanted,” said Blanco. This fact collides with the codes presented by the investigators, who found that Nieva put his wife a tracking system in the vehicle for fear that she would go to see the mayor.

Blanco has also pointed out that she did not feel “martyred” by Nieva either, despite the bad direction her marriage was taking. Blanco has acknowledged that within the damaged relationship – in which both checked the phone and the spouse’s wallet – he came to fear that his partner had killed Ardines. Thus, he sent Nieva a message in which he asked: “Pedro, what have you done?” This Monday, Blanco has expressed before the prosecutor’s questions that he did think that he was behind the crime, but has clarified that he never saw “Pedro have so much hatred for Javier” as to commit the crime, nor that his husband made him ugly constantly infidelity. Blanco’s position is contradicted by the hundreds of messages that the prosecutor has indicated that she crossed with her husband in the form of reproaches, a tone that the appearing party has made subject to a bad moment in the relationship between the two.

The alibi that the accused presented to his partner is that on the day of the murder he had been in Amorebieta (Bizkaia), where they lived. Blanco has also downplayed some words he shared with his sister, in which he told her that during an anger over infidelity her husband had urinated on his new shirt. Blanco has reported before the popular jury of the Oviedo Court that it would have been just a few drops and that the garment was in the bathroom.

Finally, the woman has called the attitude of the Civil Guard “unpleasant” when summoning her to testify when the crime occurred, a line that the defendants’ defenses are trying to highlight on various issues in the case. “I do not believe that my husband is responsible for Javier’s death,” he has settled.