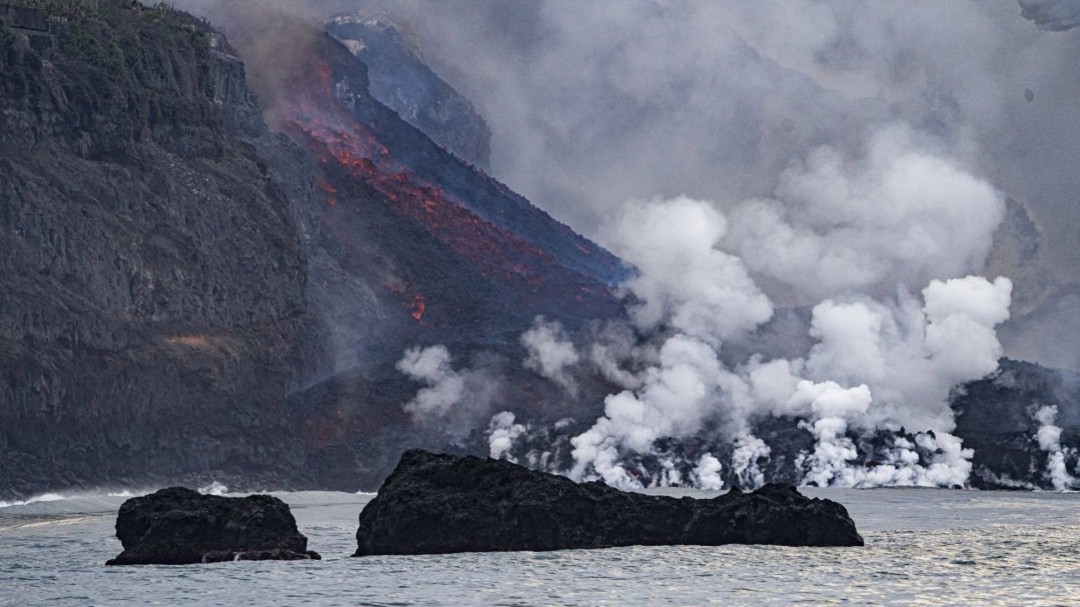 The La Palma volcano this Saturday reached the 84-day duration of the longest eruption on the island since there are records, that of Tehuya in 1585, which it will exceed at 3.13 pm this Sunday.

In these almost three months of activity, the volcano, still unnamed, has caused damage whose bill amounts to more than 900 million euros for now and 7,000 evacuated. In its passage, it has formed lava flows that would completely cover Melilla and has gained as much ground from the sea as to house the Vatican State in it.

For a long time the scientific committee that follows the eruption has not published one of the most illustrative figures of the size of the volcano, such as the volume of material emitted so far (the latest data corresponds to day 47 of activity: 120 million m3, three times the 1975 Teneguía eruption). But this eruption does not lack shocking magnitudes, these are some:

No one has lost their lives in the La Palma eruption as a direct effect of the volcano, since the entire affected area has always been evacuated in advance, even at the most uncertain moment: in the hours that preceded the eruption of the volcano at 3:13 p.m. Sunday afternoon, September 19 in Cabeza de Vaca.

However, there is an accident under investigation: on Saturday, November 13, the lifeless body of a 72-year-old man was found who had entered the excluded area the day before, with permission to clean a house of ash in the Corazoncillo neighborhood. The autopsy was inconclusive. It will be the complementary analyzes that determine if his death was directly related to the volcano (for example, due to inhalation of gases) or indirectly (due to the fall of a roof removing ash) or if, on the contrary, it was due to natural reasons. unrelated to the emergency.

See also  Russia-Ukraine War: What to know on Day 7 of Russian assault

The maximum magnitude of the earthquakes that occurred in this crisis on La Palma was recorded in the early morning of November 19 and reached 5.1 points. This intensity is not only widely felt by the population, but damages appear on the scale at that level. Always mild: some glass breakage or some fissure in coatings, of little importance. In the same day, 375 earthquakes were registered.

It is the surface that the two lava deltas formed on the coast of Tazacorte have won over the sea so far. Those two strips are the youngest fields in Spain. The largest, 44 hectares, would fit the entire Vatican State, which has just that area, or 19 basilicas of St. Peter (2.3 hectares). Similarly, the lava has covered a total of 60.08 kilometers, which is almost the length of one of the great highways that bypass Madrid: the M-40 (63.3 km). In relation to the cultivated hectares, there are a total of 360 affected hectares.

It is the latest figure published on the workers directly affected by the volcano, whose companies have availed themselves of the modality of temporary employment regulation files created expressly to deal with the emergency that La Palma is experiencing.

Affected by lava, according to the General Directorate of Cadastre, of which 1,304 are homes, 179 rooms for agricultural use, 74 factories and industrial warehouses, 40 leisure and hospitality businesses, 15 schools, temples and spaces for public use. The most damaging days of the lava were September 20 and 29, when 159 and 151 properties were affected in just 24 hours, respectively.

Land covered by the different lava flows. To this extension must be added another not specified to date: the areas that the lava has not touched, but that are buried by the layer of ash, in some places several meters thick.

The area covered by lava only represents 1.69% of the island’s surface (12 of its 708 km2), but it is home to one of the most fertile and productive agricultural valleys in the Canary Islands, with numerous homes in scattered centers. If this “slab” of lava three kilometers wide at some points were taken to other coordinates of the Spanish geography, it would cover almost completely the entire surface of Melilla (12.3 km2).

Above that figure is the number of residents evacuated since the eruption began. Almost three months after the eruption began, only 30 families have been able to return to their homes in two neighborhoods of Los Llanos, as the lava flow that threatened that area was considered paralyzed.