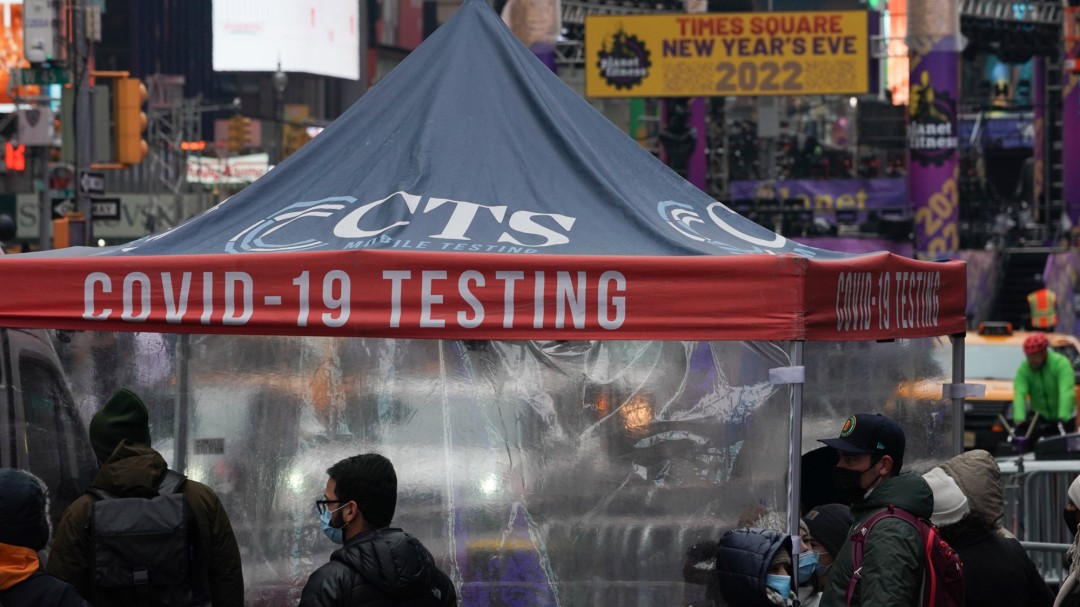 The United States broke this Wednesday the record of new cases of COVID-19 in one day since the start of the pandemic, with 488,000 infected registered during that day, according to the account carried out by The New York Times newspaper. It is worth mentioning, however, that the Times figures have not yet been confirmed by the official body, the Centers for Disease Control (CDC) of the United States Government, whose most recent data are those of Tuesday, December 28.

According to figures from the New York newspaper, the 488,000 new cases registered on Wednesday are almost double those identified during the worst days of last winter, and the Times warned that this figure may be even higher because during the Christmas period it has dropped substantially the number of tests performed.

According to the account carried out by the newspaper, another record was also recorded on Wednesday: that of the highest weekly average of new cases since the start of the pandemic, with 301,000 infected on average per day during the seven days that were the Thursday December 23rd to Wednesday 29th.

Europe also accumulates highs since the beginning of the pandemic

For its part, Europe closes the year in a generalized situation of high risk due to the high contagion of coronavirus driven by the omicron variant, while governments tighten restrictions and urge prudence in celebrations. With the exception of Romania, hit hard in the autumn by the previous wave of COVID-19, the rest of Europe is at high or very high risk, according to the latest data updated today by the European Center for Disease Prevention and Control (ECDC). ).

Eighteen of the thirty countries of the European Economic Area (EEA), including Spain, have a cumulative incidence of more than 500 new cases per 100,000 inhabitants in the last 14 days, which is equivalent to the highest level, represented by the dark red color, on the weekly ECDC maps.

Another eight – Sweden, Norway, Finland, Germany, Austria, Hungary, Greece and Poland – have regions at a very high level and others at a high level (red), which means that the incidence is between 200 and 499 cases per 100,000 inhabitants or between 75 and 200 but with a test positivity rate higher than 4%.

France, at the head of Europe

France has been the country on the Old Continent that has registered the most cases this Thursday. The French authorities reported 206,243 new positives and a further increase in the number of hospitalized patients. After the more than 208,000 cases registered this Wednesday, infections fell slightly in 24 hours, although the trend shows a similar dynamic in recent days with an average of 121,000 daily cases in the last week.

The Government announced this Thursday fines of up to 1,000 euros per employee against companies that fail to comply with the imposition of teleworking at least 3 days a week and wants to impose the mandatory vaccination pass for catering, transport and sports facilities. In addition, in Paris, with the incidence soaring above 2,000 new cases per 100,000 inhabitants, it will be mandatory from tomorrow to wear a mask outdoors, with a fine of 135 euros for those who do not comply with that order.

The health authorities of Italy have notified this Thursday a total of 126,888 new infections of COVID-19, which constitutes a record number in the transalpine country since the pandemic began and within the framework of a worsening situation.

In addition, the Italian authorities have reported another 156 deaths from COVID-19 in the last 24 hours. With these figures, the global count of Italy has risen to 5,981,428 infected since the beginning of the pandemic, while the fatalities are 137,247.

See also  Prime Minister and Chancellor: 'Increase in national insurance is necessary despite the cost of living crisis'

Thus, in Italy, where infections have risen 80.7% at Christmas, urgent measures have been approved due to the fear of paralysis of some activities: as of January 10, the quarantine for those vaccinated for less than four months will disappear or with the close contact booster dose with a positive.

On the other hand, Portugal has registered this Thursday for the third consecutive day its historical maximum of coronavirus cases, in this case another 28,659 positives along with sixteen more deaths. In the last three days, the Portuguese authorities have registered about 72,700 new cases. In total 1,358,817 people have contracted the disease, from which 18,937 have not been able to recover. On the other hand, 1,181,456 have recovered, the last 6,239 this Thursday.

The General Directorate of Health (DGS) has decided this Thursday also to reduce the quarantine period from ten to seven for those people who have contracted the disease but do not present symptoms, as well as for the risk contacts of these people who have tested positive.

Germany exceeds 7.1 million infections since the beginning of the pandemic

Germany has surpassed the barrier of 7.1 million coronavirus infections this Thursday after adding more than 40,000 during the last day, a day in which the authorities have also notified about 400 deaths from COVID-19.

The Robert Koch Institute, the governmental body for the control of infectious diseases, has indicated through its website that during the last 24 hours, 42,770 cases and 383 deaths have been reported, which brings the total figures since the start of the pandemic to 7,109,182 and 111,602, respectively.

Thus, the German country maintains contained to a certain extent, the incidence of new cases and will not allow private meetings of more than ten people (not counting those under 14 years of age) in the case of those vaccinated, while for those not immunized the limit remains at two.

In the United Kingdom, without ‘harsh’ restrictions, infections continue to skyrocket

The Health Security Agency (UKHSA, for its acronym in English) has reported this Thursday of a new daily maximum of coronavirus cases, after having counted another 183,937 in the last 24 hours, as well as 57 more deaths. These figures contrast with those registered throughout last week, with a total of 119,789 cases and 147 deaths. The authorities attribute this significant increase to the advance of the omicron variant, which in the last 24 hours is responsible for 19,544 cases in the United Kingdom, which represents a total of 229,666.

In total, since the health crisis erupted in March 2020, the United Kingdom has confirmed 12,559,926, the worst figure in all of Europe. The death toll from the disease has risen to 148,089. In the region, the mask was imposed for days in transport and closed places and it is mandatory to present a COVID certificate for large events, while the autonomous governments of Scotland, Wales and Northern Ireland have limited meetings and capacity in shows.

“We are not close to the end of the pandemic at the moment,” said Catherine Smallwood, head of Emergencies, in a message posted on social networks by the European office of the World Health Organization (WHO). WHO-Europe has reiterated these days the need to receive the booster dose of the vaccine and measures such as avoiding crowds, ensuring ventilation, maintaining a safe distance, wearing masks when necessary, hand hygiene and staying home if you have symptoms.