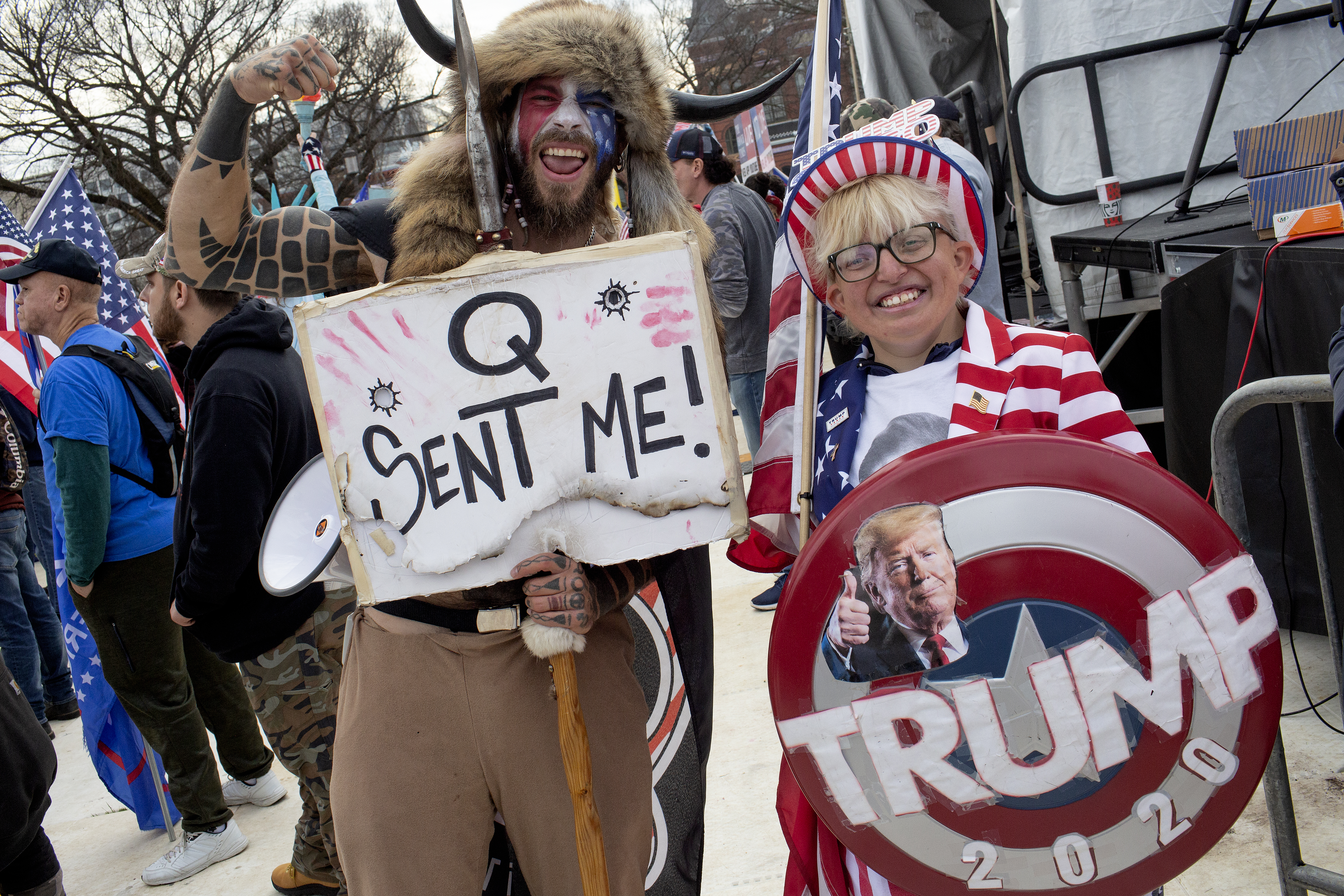 People who have extreme ideologies believe more the theory that accuses the former German Chancellor Angela Merkel and Barack Obama and George W. Bush, former presidents of the United States of different parties, of belonging to an elite of reptilian aliens. That is the main result of a double survey of more than 100,000 people from twenty countries. The work shows that there is a relationship between belief in conspiracy theories like this one and political position: the further they are from political centrality, the greater the propensity to take them for granted. The study details that the most believers are the right-wing ultras. However, there are experts who maintain that conspiracy is present in all ideologies.

Conspiracy theories are not new, nor were they born with Donald Trump or with the 9/11 attacks; neither after the assassination of the president of the United States John Fitzgerald Kennedy and not even with the great conspiracy theorist of the last century, Adolf Hitler. The American inventor Samuel Morse, the inventor of the telegraph and the code that bears his name, already defended in the 19th century that there was a collusion between the Pope and the European monarchies to flood his country with Catholics and thus put an end to American democracy. in his book The Nature of Conspiracy Theories (not yet translated into Spanish), the researcher at the University of Tübingen (Germany) Michael Butter goes back to classical Greece and Rome to find the first who believed that a small group of powerful shadow machines to achieve their goals, generally malevolent. Discredited for decades, these ideas seem to have regained strength so far in the 21st century. To explain it, many point to the internet, social networks, the rise of populism or a combination of all this.

Now a large group of researchers from 26 countries has investigated the relationship between conspiracy theories and ideology. To do this, they conducted two surveys of a total of 104,253 people, the vast majority of whom were Europeans. This is one of the largest quantitative efforts to compare belief in these alternative explanations across nations and cultures. The very heterogeneity of the sample forced the scientists to discard conspiracy theories about specific events, such as Brexit, the 11-M attacks in Madrid or the 2015 refugee crisis. In one of them, they asked about the intention to vote and in the other interviewees were asked to place themselves on an ideological scale from left to right. In both they were asked several questions to measure their degree of conspiracy. They were of the type “I believe that apparently unconnected events are often the result of covert activities” or that “there are secret organizations that have great influence on political decisions”. With this they created an index of conspiratorial mentality.

“What our study points out is that, in general, far-rightists have a more pronounced conspiratorial mentality”

Roland Imhoff, sociologist at the University of Mainz, Germany

The results in both surveys, published by the magazine Nature Human Behavior, show that, with conspiracy theorists across the political spectrum, the rate of conspiracy mentality rises as respondents move away from the intermediate positions of the ideological arc. Roland Imhoff, a researcher at the Johannes Gutenberg University in Mainz (Germany) and coordinator of the work, describes it: “We see evidence of a U-shaped relationship in both studies,” he says. That is, a concentration at the extremes and reduced levels in the middle. But they also see an additional curve, with a more linear increase to the right, especially in the first of the surveys. “What our study points out is that, in general, extreme right-wingers have a more pronounced conspiratorial mentality,” concludes Imhoff.

This concentration on the extreme right is more marked in countries such as France, Austria, Germany, Poland, the Netherlands or Belgium, especially the Flemish region of the country. But there is a small group of nations where, even though the right-wing ultras are the most conspiratorial, this mentality also grows on the extremes of the left. This is the case of Romania, Hungary and Spain. The professor of sociology at the University of Huelva Estrella Gualda, co-author of the study and responsible for the survey of the Spanish, highlights the economic factor as a possible at least partial explanation of the Spanish case. “There have been one economic crisis after another, 15-M… and part of these groups of people look for other sources of trust,” he says. In the profile of the Spanish conspiracy theorist, Gualda also highlights his relatively younger age than those from other countries and his exposure to new technologies, to “an internet without filters.”

In addition to populism, Butter, the author of The Nature of Conspiracy Theories, also points to the internet as a key to understanding the current situation. The German scholar recounts how until the middle of the last century, conspiracy was just another part of knowledge. Many of his theories, such as the Jewish run of the world or the role of the Illuminati in the French Revolution, were taken for granted by both elites and ordinary people. But a series of processes, from the Holocaust to advances in the social sciences, led to the loss of prestige and delegitimization of conspiracy theories, cornering their believers at the extremes of the public sphere.

Michael Butter, author of the book ‘The Nature of Conspiracy Theories’

But the internet and social media have fragmented this public sphere. And now the conspiracy theorists have a global loudspeaker where they can spread their ideas, where orthodox and heterodox thought are equally accessible, both placed on the same level. “ [Internet] it directs public attention to ideas that have had little or no audience in the past,” Butter writes. In addition, it allows the believer to be taken out of isolation and meet others like him, what Butter calls resonance chambers. “The algorithms of the search engines and social networks that we use make sure that the results of our searches and walls of our networks only show content that confirms what we already believe,” continues the German researcher.

Regarding the results of these two new surveys, Butter points out that they “confirm what other studies have also found.” But he adds that “quantitative research fails to explain why belief in conspiracy theories is, in today’s Western world, more pronounced on the radical fringes than in the more moderate center.” In addition, he emphasizes that his conclusions would only be valid for the Western European and North American environment. In much of the rest of the world, conspiracy theories remain legitimate knowledge.

Oxford University researcher Turkay Nefes has focused his work on conspiracy theories, especially anti-Semitic ones. Although he acknowledges the contribution of a comparative work between so many countries like this, he argues that the conspiracy is only of extremists. In fact, he writes in an email: “Some studies, like mine, do not suggest that [las teorías conspirativas] concentrate on the political extremes. Still, given that the big political parties are more likely to wield power, Nefes acknowledges that “they are more likely to have first-hand experience of how government works compared to the extremes, who may never have been in political positions.” of power”. In other words, “they are more likely to know that the conspiracy theories are not correct.”

In the study by Imhoff, Gualda and others, some elements that share conspiracy theories and extreme ideologies are reflected: on the one hand, their Manichean vision of a world in black and white, divided between good and bad; on the other, a reduction in social, economic, or political complexity. In his conclusions, one of the explanations for this connection would be that extreme political positions rarely reach power and “the conspiratorial mentality would be a reaction to the fact that one’s own political ideas are not part of the dominant politics.”

However, Nefes, also a researcher at the Institute of Policies and Public Goods of the CSIC, maintains that, “being ideology relevant, we cannot associate conspiracy theories only with certain ideological groups, such as extremists. Likewise, we cannot associate it only with political parties that lost elections, as used by some governments. It’s a pretty complicated relationship, which depends on contextual factors.”

The key to this apparent resurgence of conspiracy theories would go beyond politics. As Butter wrote in his book and the authors of the study repeat, these types of ideas fulfill an interpretive function of the world, of the complex current reality. In this, they function as religious beliefs did in the past. But Butter limits its scope: “Conspiracy theories have partially replaced religion in the sense that they serve the same functions, but now we know that they get along very well with religions. Let us think of evangelical or Islamist circles. If it were only a matter of replacing religion, they would be more widespread in the most secularized countries, and it is not like that”.