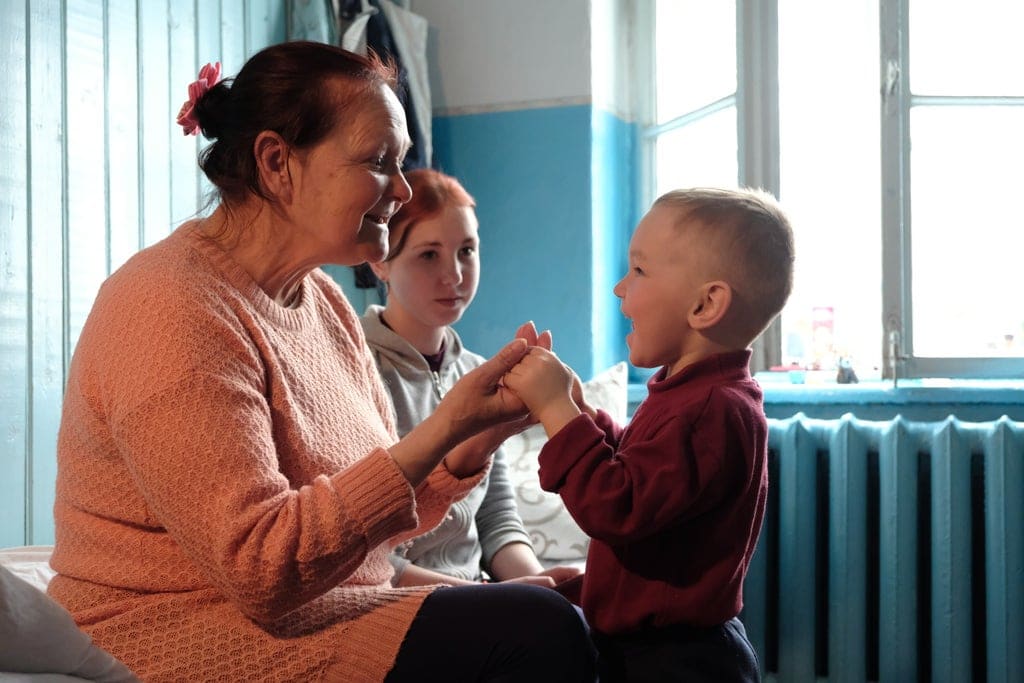 The Russian invasion of Ukraine is not the first war Ekaterina* has lived through.

The woman, in her 80s and from Donetsk region in the east of the country, survived the Second World War as a child and is now confronted with the horrors of another conflict – one which took only two days to claim the life of her husband.

Ekaterina is one of the millions of people who are internally displaced – those who are not willing or able to leave their homeland.

The United Nations said at the end of March that more than 10.5 million people had been uprooted, either within Ukraine or abroad as refugees, around a quarter of the population.

More than 4 million people have now crossed the border into Poland, Slovakia, Hungary, Romania and Moldova, but many more have stayed put, despite the risks.

“They want to stay connected to the men, the husbands and brothers, that are still in Ukraine, and they feel that they would be crossing an emotional border as well as a national border in leaving the country,” explained James Orlando, the program director for the Ukraine crisis response team at humanitarian organization World Vision. “They have been displaced from the east, but they still feel like this is their country.”

Ekaterina was among many mainly women and children who had made it to the relative safety of western Ukraine’s Chernivtsi, a city of around 250,000 people on the upper Prut River, in the foothills of the Carpathian Mountains.

But distance from the frontlines of the fighting is no guarantee for her or anyone else’s safety.

Chernivtsi, like many towns and cities in the west, where the airstrikes are less frequent and the field combat is yet to wreak damage and destruction, has swelled with internally displaced people.

Aid groups say the city has effectively doubled in size. Many of the displaced are using Chernivtsi as a staging post where they can rest and ponder their next steps.

For some, that will be an eventual journey to cross into the EU or Moldova. Others are staying put.

Orlando, speaking to The Independent from a World Vision center in Romania, having just returned from a visit to the operation in Chernivtsi, said temporary accommodation comprising mattresses on the floor and makeshift showers were now housing people for longer than any one had expected.

The presence of so many people is putting pressure on supply lines, and food, medical supplies and other essentials are running out.

World Vision representatives said they were particularly concerned about lack of access to healthcare given the well-established link between conflict and the outbreak of disease, with possible outbreaks of Covid-19, tuberculosis, measles and polio all cause for concern.

Recounting meeting Ekaterina, Orlando said: “There was a roomful of elderly people, five to 10 in total, surrounded by mattresses on the floor. Some of them were milling about and this older woman comes into the circle, and she’s emotional, you can tell it from the start.

“She’s speaking in Ukrainian, and then you can tell her eyes start watering, and then she just starts crying.

“She’s just saying ‘do something, do something, I lost everything, we shouldn’t be like this, this is Ukraine’. She said she was there for the Second World War and she lost everything at the beginning of her life. And now this is the tail end of her life, and it’s happening again. She lost her husband from her on the second day of the Russian invasion.

“She was crying, and there were women around consoling her. I just reached out my hand and she didn’t take it. It was a hard thing to witness.”

The UNHCR estimates that a total of 7.1 million Ukranainians have been internally displaced, and delivering aid remains challenging in parts of the country where there is active fighting.

Cities such as Mariupol and Kherson remain hard to reach. But in western cities, World Vision and other NGOs are providing supplies including food, medicines and hygiene kits, including to an overwhelmed hospital in Chernivtsi.

A second woman, younger and with two small children, was at another center being helped by World Vision staff.

The Independent has set up a petition calling on the UK government to be at the forefront of the international community offering aid and support to those in Ukraine. To sign the petition click here.

“We did nothing wrong, it shouldn’t happen this way, I was a good person,” she told Orlando during his recent visit.

Recalling that interaction, he said: “In these moments your humanity – more than your humanitarianism – shines through and you want to help them and you feel terrible about it.

“A month ago, two months ago, these women were living a normal life and had no expectation that it would be uprooted. And now they are on a mattress halfway across the country.”

*not her real name