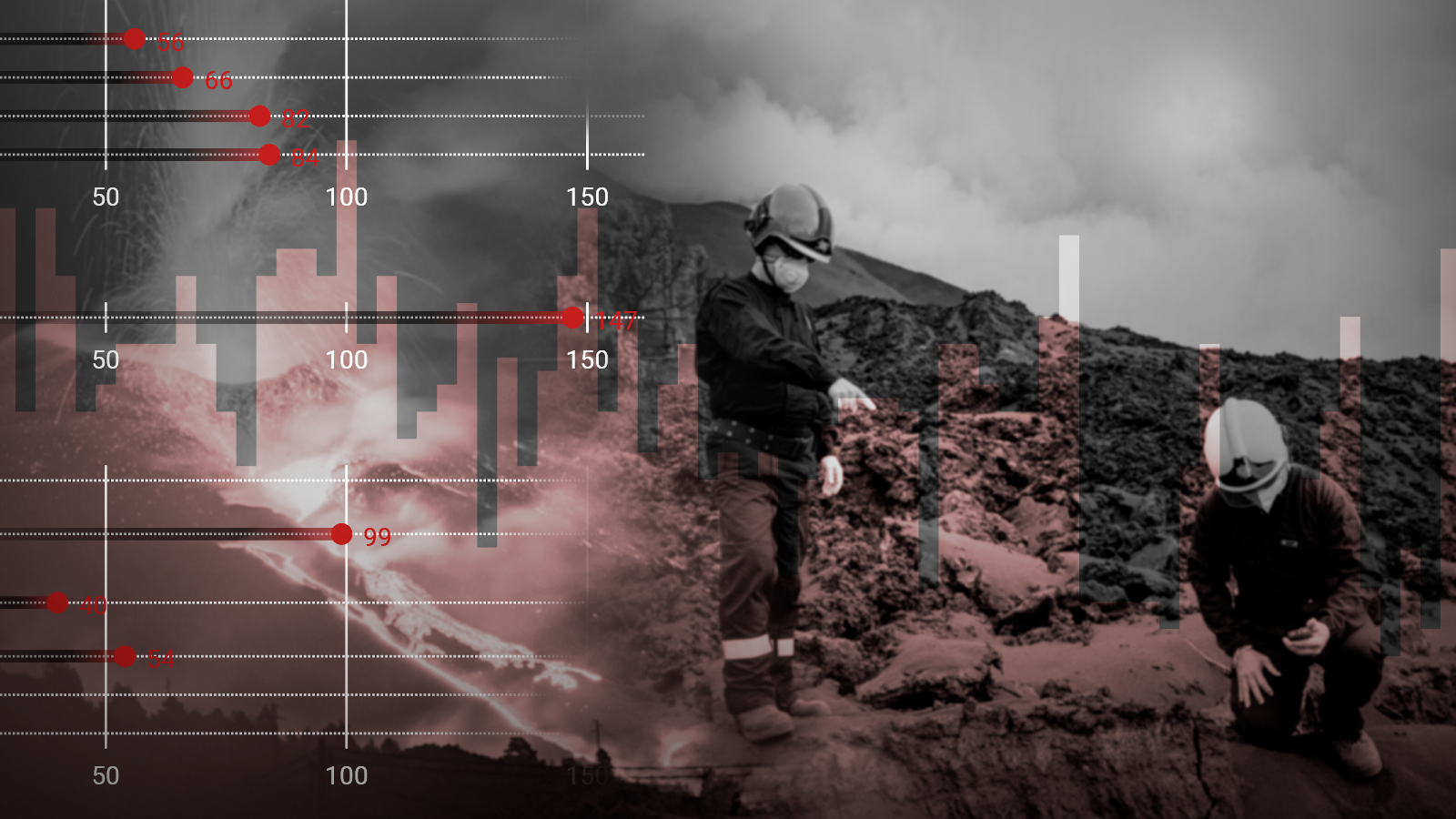 Only ten years. This is the time that has elapsed between the underwater eruption of El Hierro and the fissure and strombolian of La Palma, which reached this Sunday the three months of activity and it becomes the longest on the island and the fourth in the Canary Islands since there are records. In just a few weeks, we have become accustomed to terms such as tremor, deformation of the ground, level of gas and pyroclastic emissions or surface covered by lava. Much less everyday words a decade ago, which have now become daily indicators of a phenomenon that has been studied and retransmitted to the minute almost for the first time in our country.

To collect them, experts have deployed equipment and tools whose usefulness has transcended the limits of science, helping to know how many buildings have ended up under the lava or the terrain that the volcano is gaining from the sea. The irruption of technologies such as satellites, GPS or drones has allowed geologists and volcanologists to go from estimates to quantifiable data.

From observation to measurement

“Had we had the records and graphs of a seismological observatory located in the Canary archipelago, it is undoubted that there would have been abundant and precise data that would have been the immediate antecedents of the current eruption.” This is how the geographer engineer Juan María Bonelli lamented in 1950 in an assessment of the eruption of the San Juan volcano, also on La Palma. More than 70 years later, his successors agree with him.

“What we do now has nothing to do with the measurements that were made 50 years ago,” says the geologist of the Geological and Mining Institute of Spain (IGME) Rosa Mateos, who remembers the images of her colleagues in the Teneguía eruption, also on the island of La Palma, in 1971. But it is also far from what was done in El Hierro in 2011.

That “was a kind of small general rehearsal,” explains the geologist to DatosRTVE. Mateos studied the underwater volcano and ensures that on the ground on La Palma he has seen a technological revolution “of such caliber” that it has facilitated the transition from qualitative to quantitative data.

“Thanks to technology, in recent decades, we have gone from that bohemian image of the volcanologist who gets into a crater to study the volcano, to that of a technician capable of interpreting signals of all kinds and programming“agrees the volcanologist and spokesperson for the Canary Islands Volcanological Institute (Involcan), David Calvo.

The European Copernicus surveillance system has put its network of Sentinel satellites at the service of volcanologists, which orbit the earth at an altitude of around 800 kilometers. “We have been able to see, with a spatial eye, the extent of the lava flows, how they were advancing day by day and how they were occupying new territory “, says Mateos.

In addition, the geologist adds, the satellites have served to study the deformation of the ground with millimeter precision, an indicator of the rise of the magma that allows to know what the state of the eruption is.

The following graph, for example, shows the progress of the lava flows from the volcano week by week. Its use has also been very important to manage the volcanic emergency, argues the scientist.

In the last 90 days, the Cumbre Vieja volcano has become the one that has expelled the most magma of all recorded eruptions on the island: 159 million cubic meters, according to first estimates.

Furthermore, the Copernicus data indicates that their casting It is also the one that has covered the most surface to date, and the height of the volcanic cone has remained a few centimeters from exceeding 200 meters from the 1646 eruption in Martín de Tigalate.

The damage balance is calculated from space

Satellite images have also helped identify properties that have been buried under lava.. And its crossing with the data of the cadastre allows to know that 45% of them are residential constructions. However, there are also 1,300 other structures whose function is still unknown.

As for the victims, the eruption of Cumbre Vieja is the one that has caused the most evacuees of those with records: 7,000. In addition, there is at least one fatality to be regretted collaterally.

Seismicity: an alert mechanism that has worked

Heeding the longings of the geographers of the middle of the last century, the National Geographic Institute (IGN) has had a Volcanic Watch Network in the archipelago for years. In La Palma, it has deployed more than a score of measuring stations, of which almost half are dedicated to monitoring seismic activity.

With these surveys, “we scientists were able to predict that the eruption would occur shortly“Recalls Mateos. The earthquakes – of low magnitude, but very close to the surface – predicted the explosion of the volcano days before the magma erupted from the ground at Cumbre Vieja.

At the end of December, the geologist continues, the measurements draw a similar scenario that points to the exhaustion of the eruption. The disappearance of the volcanic tremor has exposed tremors of magnitudes below 2. However, this time they are at a greater depth.

Measure tremor of lava under the ground, now silenced, has been possible thanks to the DAS, a system that, according to volcanologist David Calvo, has come to stay. It is an acoustic distribution mechanism that partially uses the fiber optic networks through which the internet signal circulates. “There is always some empty fiber that we use as seismic receptors”, explains the expert, who highlights the “great discovery” that has involved having a seismic detection system every ten meters in this eruption.

Drones to manage the volcanic emergency

A daily flight at 6:00 in the morning. This is the routine followed by the pilots who have collaborated with geologists in monitoring the volcanic eruption on La Palma. Flying over lava flows and emission points with drones has been fundamental to decide the minute by minute of the emergency on the island.

The possibility of knowing in almost real time if a new mouth is opened, which bulbs emit pyroclasts and which lava, or where and at what speed the lava flows has served to define evacuations and confinements that the Cabildo de La Palma has communicated through a daily traffic light.

Beyond visual tracking, adds Calvo, drones have been essential for collecting samples. “We have incorporated solenoid valves capable of opening and closing, which can be programmed to catch gases in the areas we need,” exemplifies the volcanologist.

Another of the measurements that was already used in the past is the height of the eruptive column, but it has been honed in this eruption. This data gives an idea of ​​the rash activity and his explosive capacity. In addition, experts point out that the control of the gases emitted by the volcano has served to announce the beginning of the end of this natural phenomenon.

“The estimate of sulfur dioxide (SO2) is a parameter that is used in almost all active volcanoes, perhaps because it is one of the most accurate indicators“explains the Involcan spokesman, whose measurements detected” extremely low “levels of this gas on Wednesday.

These remote optical sensors have been in permanent use for years, although it is on La Palma where a massive use in land mobile position. Since the eruption began, Involcan has taken between four and five measurements each day. They have been done with receivers mounted on a car or on the helicopter and on the Civil Guard patrol boat.

Both Calvo and Mateos agree that the innovations that have been developed on La Palma have a long history in the study of volcanic eruptions and they are convinced that they have come to stay. “More and more volcanoes are beginning to be surrounded by very dense populations, and many groups have wanted to come to develop surveillance techniques and test new technologies,” explains the volcanologist.

For the experts, Cumbre Vieja is probably “one of the best covered and best documented eruptions of modern times”. And no one has doubts that what happened around the first great urban volcano of the 21st century has marked a before and after in the management of these types of emergencies.