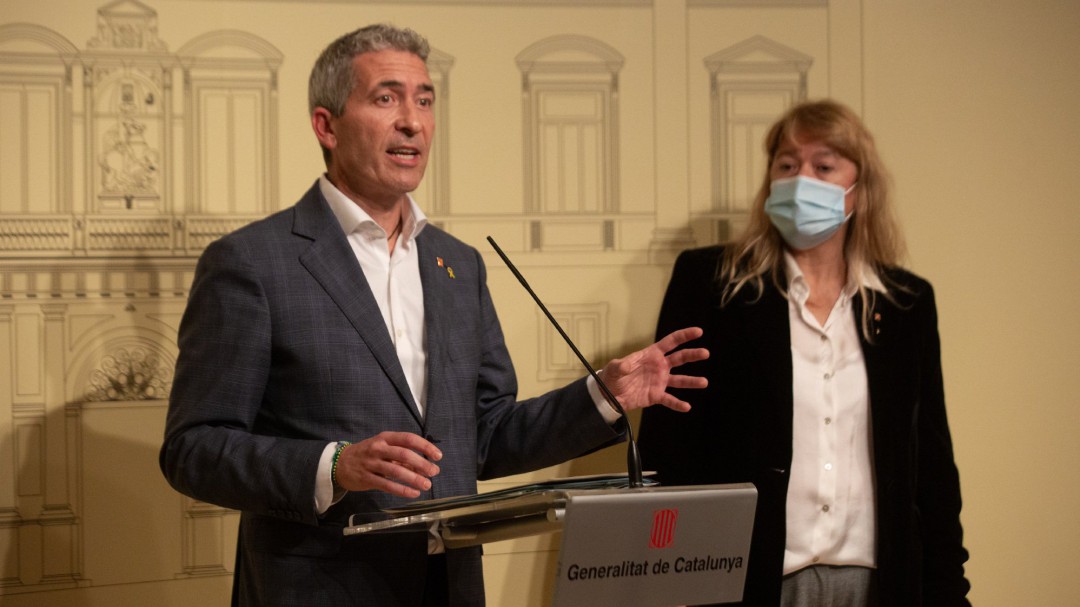 The Supreme Court has definitively abolished linguistic immersion in Catalonia, forcing Spanish to be the vehicular language in all classrooms, at least 25% of the teaching hours. This means that in addition to the Spanish Language and Literature subject, at least one other core subject is done in Spanish. For the decision to be carried out, it must be requested by the Ministry of Education, which was the one who in 2015, in the hands of Minister José Ignacio Wert, denounced the Generalitat.

According to the Minister of Education, Josep González Cambray, the Ministry has informed him that they will not demand compliance with the sentence, with which the Catalan Executive hopes to continue as before. Ministry sources confirm that Minister Pilar Alegría has spoken with Cambray, but they do not give details of the conversation and avoid commenting on the decision. The jurists and experts consulted assure that only the complaining party, the Government in this case, can demand the application of the sentence.

The Supreme Court has not accepted the appeal filed by the Generalitat against a 2020 judgment of the Superior Court of Justice of Catalonia (TSJC), which considered “residual” the use of Spanish in Catalan educational centers. The judgment of the TSJC, which has now become final, responded to a demand from the Ministry of Education, which considered that the Generalitat was not guaranteeing the presence of Spanish as a vehicular language.

The TSJC agreed with the Ministry, came to the conclusion that Spanish was used in a residual way in the classrooms and that it was necessary to correct the situation by establishing a minimum of 25% of teaching hours for all students in the system, and not only for those who claimed it judicially, as had happened up to that moment.

The Supreme Court dismisses the appeal on the understanding that the High Court cannot enter to assess the test, what the TSJC determined: that indeed in Catalonia, Spanish in the classrooms does not reach 25% of the teaching hours. Something that the court considered proven as a result of a report from the State Bar. The Supreme Court also recalls that this percentage, that 25%, is not arbitrary but was sentenced years ago in resolutions that established doctrine.

Aragonès: “The use of Catalan must be increased”

Following the decision of the Supreme, the president of the Generalitat, Pere Aragonès, has urgently called a meeting with all educational and cultural entities to work on a “joint response” this afternoon. In an awards ceremony, Aragonés has reacted by assuring that “Catalan is not touched at school” and asking “to increase the use of Catalan in schools”.

“The linguistic immersion model has been a guarantee of social cohesion and equal opportunities”, has defended the president. “We will work in all possible ways to overcome this situation,” Aragonese said, calling it “a very serious attack.”

“Frontal attack on the educational system”

In a press conference called urgently, the Minister of Education, Josep Gonzàlez-Cambray, and the Minister of Culture, Natàlia Garriga, who have denounced “a new frontal attack by the judges on the Catalan educational system”. In addition, Cambray has indicated: “The Department of Education is on the side of the centers, they have to continue working as before. Our model is that of the education law of Catalonia, which has a very broad social consensus and a parliamentary majority ”.

In this sense, he has thus launched a message of “tranquility” to educational centers and has ensured that this new situation will not involve “any change” in the current system: “Language learning does not go by percentages and less when we are in full educational transformation, which has come to stay, “he added. “We will continue to apply the education law of Catalonia, which implies that Catalan is the vehicular language,” Cambray concluded.

“An anomaly and a contempt”

The minister has criticized that “it is a judge who arbitrarily determines the percentage of hours that are necessary to learn a language”, something that he sees as “an anomaly and a contempt for education professionals.” He has denied that there is a linguistic conflict in Catalan schools and, in this sense, has assured that “since 2005 only 80 families have requested schooling in Spanish.”

Decrease in social use

Cambray recalled that the Generalitat, after detecting a decrease in the social use of the Catalan language among young people, has launched a plan precisely to “reinforce the use of Catalan”, something they will do, he pointed out, “with firmness, conviction and realism. ” Garriga has also denounced “the attack on the linguistic immersion model.”