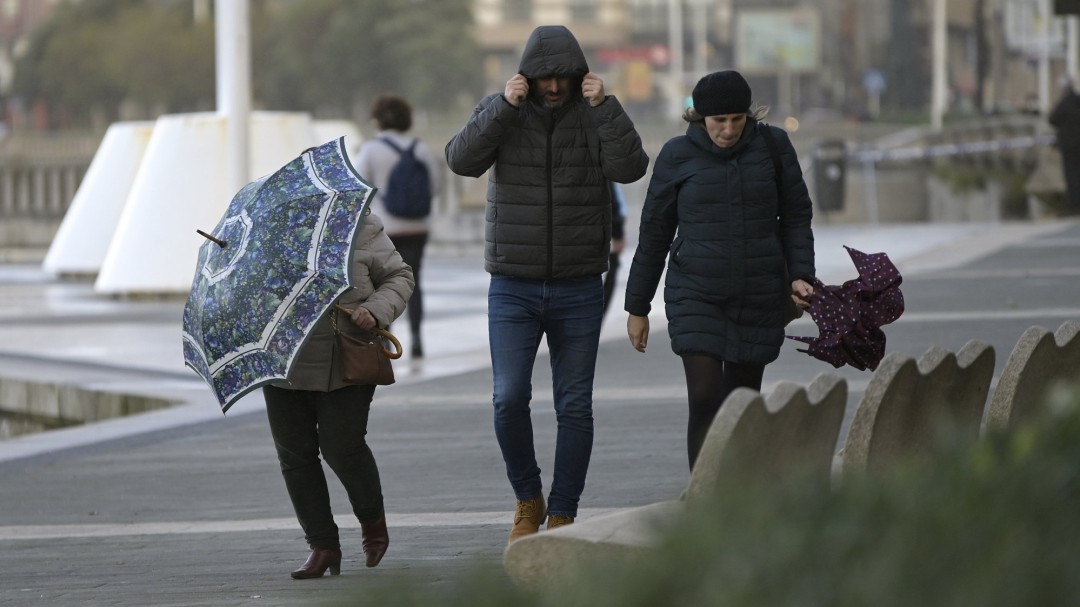 The State Meteorological Agency (Aemet) foresees for this Wednesday generalized showers with occasional storms in Galicia, Cantabrian and Pyrenees, which will extend to the south and east of the Iberian Peninsula and will include snowfall in different points.

The snow level will drop to 500/1000 meters in the north, 600/1000 in the center and 900/1,200 in the southeast, so snowfall is expected in all mountain systems and in the moorlands of the northern plateau and east of the southern plateau.

In the case of the Canary Islands, the sky will remain covered with the probability of scattered rainfall on the islands of greater relief.

The thermometers will continue to drop in a generalized way, especially in the northwest, Cantabrian and the southeast mountains, with morning fogs and frosts in the mountain systems of the northern half, southeast and some moors in isolation.

The wind will blow intensely and west in the peninsula and the Balearic Islands, with the probability of being strong or with strong intervals in Galicia and Alboran, and may become very strong in the Cantabrian area and with trade winds in the Canary Islands.

Generalized rainfall, which may be locally strong and be accompanied by occasional storms, with mists and fogs in high areas and snow from 600/800 meters; the thermometers will drop notably, with weak frosts in the high areas of the southeast mountains, while the wind will blow from the west and northwest directions, with strong and very strong intervals in the morning on the coast, although it will decrease slightly in the interior in the afternoon.

Mists and fogs in the Cantabrian mountain range and generalized rainfall that on the coast and in the east of the Principality can be locally strong and stormy, with a snow level starting at 500/700 meters; Low temperatures, which will be more than noticeable in the case of the maximums, and strong wind with gusts of very strong and western component in the morning on the coast and in high areas of the mountain range, although it will decrease in intensity in the afternoon .

See also  Morbius release date in the UK, cast, age rating, and how does it relate to Spider-Man: No Way Home?

Cloudy with generalized rainfall that can be accompanied by locally strong and persistent storms in the northern half in the afternoon, with the snow level starting at 500 meters; temperatures drop notably at maximum temperatures, leaving weak frosts in the southwest and more intense frosts in the mountain range; Loose wind from the west component in the interior, although in exposed areas of the coast there will be very strong gusts.

Mists and fogs scattered in high areas and covered with generalized rains, which will be stormy on the coast and less frequent in Álava; the snow level will drop to 400 meters, with the thermometers descending, especially the maximum ones, and weak and scattered frosts; Strong wind with very strong gusts and a western component on the coast, while in the interior it will be weak with a western component.

Cloudy, with persistent rainfall especially in mountainous areas in the north and occasional on the plateau, and with the snow level dropping to 600/800 meters; temperatures down, notably in the case of the maximum, with generalized weak frosts in mountain areas and scattered on the plateau; Wind with strong or very strong gusts from the west.

Mists and fogs scattered in high areas with cloudy skies and locally strong and persistent rainfall in the morning in the northern half that in the afternoon will spread to the entire foral community, with the possibility of snowfalls from 500 meters; temperatures will drop less sharply in the case of the minimum in the southern half, with weak frosts in mountain areas of the northern half, especially in the Pyrenean peaks; light wind, except for some more intense intervals in the Ribera.

Overcast sky with rains that will discharge especially in the second half of the day and will be more frequent in the Iberian, with the snow level dropping to 600 meters; The thermometers tend to drop especially in the maximum, with the possibility of weak frosts in the Iberian, while the wind will be from the west, with strong or very strong gusts.

Covered with rainfall, more intense at the first and last minute, in the Pyrenean area and north of Cinco Villas, while in the rest of the region it will also rain, especially in the Iberian system; the snow level will reach 500 meters in the Pyrenees and 800 in the Iberian system, with falling temperatures and frosts in the mountain systems; Moderate west component wind, with strong or very strong gusts.

Rainfall throughout the Pyrenees and especially in its western half, with rainy intervals in the rest of the region, especially the northern part of Gerona; the snow level will drop to 500 meters in the afternoon, with minimum temperatures also decreasing in the Pyrenees and Tarragona and maximum temperatures generally falling; North wind from weak to moderate and occasionally strong on the north coast in the Ampurdán, while in the rest it will be of a moderate west component, with strong or very strong gusts in Tarragona and south of Barcelona.

Weak and scattered rainfall, more generalized in the mountainous north with the snow level falling to 1,000 meters, weak frosts in Gredos and decreasing temperatures, especially the maximum ones; A west component wind that will blow with strong gusts in the north and east of the Community and very strong in Gredos.

Clouds and rainfall, more frequent and intense in the northern half of the Sierra, where the snow level will drop to 700/900 meters, although to the south of the region clearings will open at the end of the day; The thermometers will tend to drop slightly, although more sharply in the mountains, while the wind will blow from the west, with very strong gusts in the Sierra.

Cloudy intervals in the first hour that will end up covering the sky and leaving some weak rains, more frequent in high areas of the Central and Iberian systems and less likely in the rest, with the snow level descending to 700/900 meters in the northeast; the lows will drop at the end of the day, notably in the mountain areas of the northeast, while the highs will remain unchanged except in the southeast where they will also drop; Weak frosts and wind from the west, with very strong gusts in Albacete and high areas of the northeast.

Cloudy intervals and rainfall in the north in the early hours, which will be weaker and more dispersed in the interior as the day progresses; the snow level will be 900/1000 meters and weak frosts are not ruled out in the interior of Castellón; the thermometers drop slightly, especially the minimum in Castellón, and the wind will blow from the west component and occasionally strong, with very strong gusts in inland areas.

Cloudy sky and possible occasional rainfall in the Northwest, especially in the early hours; the snow level will be around 1,200 meters and the temperatures will not register great changes, except for a decrease in the maximums in the interior, which will be notable in the Northwest; West component wind, with very strong gusts in the Altiplano and in high areas.

Cloudy intervals with occasional precipitation, generally weak, which at night could be in the form of hail and possibly stormy; Temperatures will rise during the early morning and will drop from noon until reaching the minimum at the end of the morning; Strong wind from the west and northwest directions, with gusts that can reach 120 km / h on peaks and capes.

Cloudy, with possible weak rains that will be more probable and intense in the Betic mountains and the Strait area, although in the afternoon they will tend to subside; the snow level will be above 1,200 meters, with minimum temperatures that will rise on the Atlantic coast and the Guadalquivir valley and will remain unchanged in the rest while the maximums will remain unchanged on the coast and will fall in the rest; Strong west component wind, with very strong gusts in the eastern third.

Medium and high cloudiness in Lanzarote and Fuerteventura, with occasional and weak clouds and rains in La Palma and Tenerife, less likely in Gran Canaria, and cloudy intervals in the rest of the archipelago; temperatures with few changes or in slight ascent and wind from northeast direction.