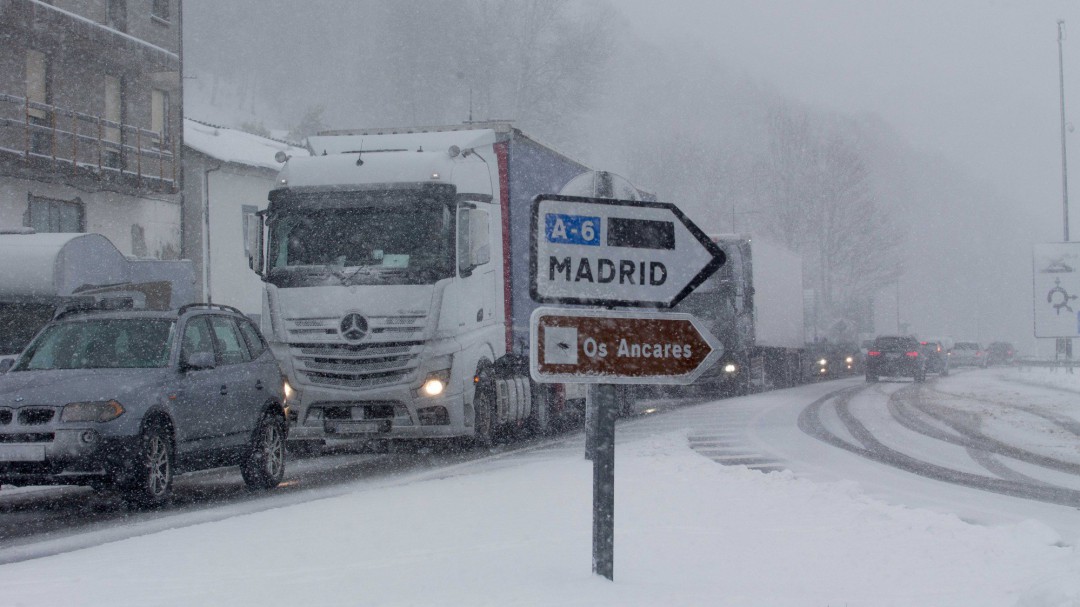 The squall Barra, with gusts of strong wind and precipitations in the form of rain and snow, is complicating the end of the longest holiday bridge of the year and already affects 70 roads, five of them on the main network.

The community that gathers the most warnings is Catalonia, where strong winds, snow, coastal phenomena and the possibility of avalanches are expected. In these seven communities that level of alert will be maintained throughout the night and a good part of the day on Thursday.

In all other communities, AEMET maintains the yellow level of alerts for wind, snow or coastal phenomena.

Roads affected during the end of the bridge

The snowstorm affects a total of 70 roads, five of the main network and 65 of the secondary network, of which thirteen remain cut and in another 46 the use of chains or winter tires is mandatory, according to sources from the Directorate General of Traffic (DGT).

In general, the situation is more unfavorable in the north of Spain, mainly in the autonomous communities of Aragon, Asturias, Cantabria, Castilla y León and Navarra.

According to the information provided by the General Directorate of Traffic, which had asked the drivers to anticipate the return of the bridge due to the forecast of bad weather, by mid-afternoon there were a total of 80 kilometers of roads cut and more than 500 in level red (trucks, articulated vehicles and buses are not allowed to traffic and the others are obliged to use chains or winter tires), all in the north of the peninsula and none of them on the main network.

All this in a day marked by the special traffic operation on the occasion of the return of the Constitution and Immaculate Bridge, which, however, in the early hours of the afternoon has hardly caused retentions in the accesses to the places of return.

Among the five affected roads of the main network (highways and expressways), is the A67 as it passes through Valdeolea (Cantabria), where the passage of trucks and articulated vehicles is prohibited.

On the other hand, according to information from the DGT updated at six in the afternoon, the A15 in Soria at Medinaceli, the A52 in Lubián (Zamora) and the AP66 between Lena (Asturias) and Valverde are passable although with great caution. of the Virgin (León).

The maritime situation has also been complicated in recent hours, which has forced the Balearic Port Authority (APB) to close for just over three hours to close the port of La Sabina, in Formentera, which has been reopened.

In Catalonia, strong gusts of wind have caused some elements of the El Corte Inglés façade in Plaça de Catalunya in Barcelona to fall without causing injuries, but it has forced the suspension of human and vehicle traffic on Fontanella street.

In the Catalan capital, the Firefighters have carried out about twenty actions this morning due to the wind, which has forced the City Council to activate the Basic Municipal Emergency Plan in the alert phase.

In the Basque Country, the protocol for pumping water from the Barbadún River (Muskiz, Bizkaia) has been activated due to the rain in recent days and the forecast that it will continue to rain, as reported by the Petronor company in a statement, which indicates which has communicated this activation to both the Muskiz City Council and the URA-Basque Water Agency.

According to the State Meteorological Agency (Aemet), the front associated with the storm Barra has left snowfall in the last hours in the north of Spain, rainfall and strong gusts of seeing that have reached 143 kilometers in Cabo Busto (Asturias), the 137 in Machichaco (Cantabria) or 132 in Estaca de Bares (Galicia).

In the Valencian Community, the wind has reached maximum gusts of 86 kilometers per hour in Morella, 81 in Villafranca del Cid and 78 in Pobla de Benifassá, all in Castellón, according to Emergencies of the Generalitat Valenciana.

Rainfall has left 27 liters per square meter in San Sebastián or 25 in Cabo Peñas (Asturias), as well as 6 liters of snow in Puerto de Navacerrada.

In the Castilian-Leon provinces of Ávila, León and Soria, the thermometers have marked zero degrees, while the maximums have been registered in Santa Cruz de Tenerife and Las Palmas de Gran Canaria with 22 degrees and 20 in Almería.

The snow level this Wednesday will be between 600 and 1,000 meters, falling promptly to 500 meters in the Cantabrian Mountains, Pyrenees and the northern Iberian system. Snowfall is expected in all the mountain systems and in the northern and southern plateaus, although they will be more abundant in the western Cantabrian mountain range, areas of the Pyrenees and without ruling out in coastal areas of the Cantabrian Sea.

The next few hours will continue the passage of the front that will also leave widespread, abundant showers with the occasional storm in Galicia, the Cantabrian Sea and the Pyrenees and something persistent on the Cantabrian coast.

But the snowfalls leave good results for others, such as in Sierra Nevada where they have closed the Constitution Bridge and the Immaculate Bridge with 76% occupancy and almost 55,000 people including visitors, skiers and users.