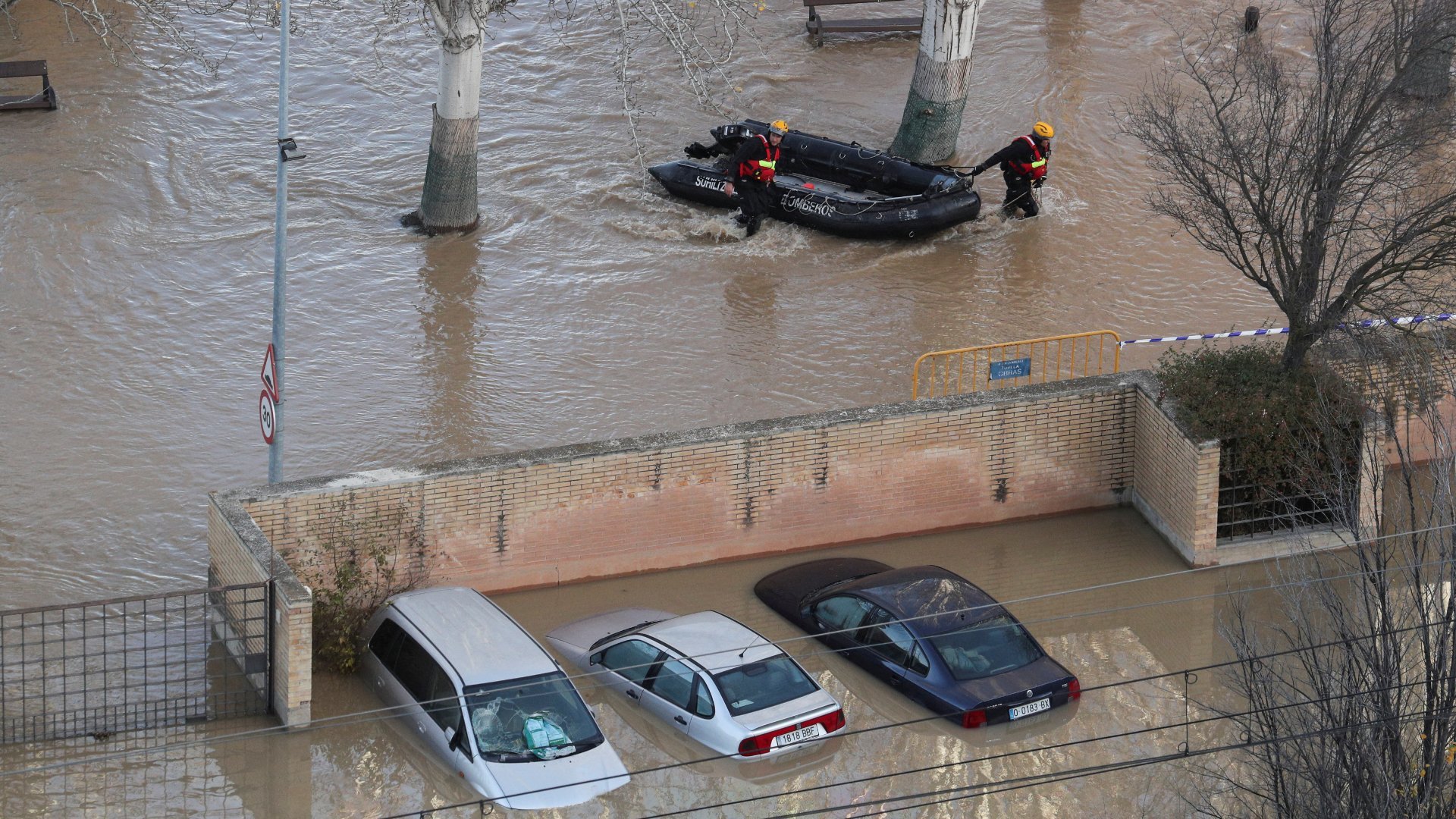 The extraordinary flood of the Ebro keeps Aragón in suspense, while Navarra, where the passage of the storm Barra has left two dead, has announced that it will request the declaration of a catastrophic area, as its president, María Chivite, has assured in RNE.

In Navarra, according to Chivite, the situation has improved in relation to the previous day, but there is still much to do and although It is still too early to assess damages, agriculture is currently the sector most affected, and “nursing homes, schools and health centers” have also been affected.

The mornings of RNE with Íñigo Alfonso – María Chivite: “We will ask for the declaration of a catastrophic zone” – Listen now

Looking ahead, Chivite has advanced that work should be done on flood plans, since these “These floods are increasingly common and we have to be better prepared.”

The flood of the Ebro in Novillas reaches 8.5 meters

Meanwhile, in Aragon, the extraordinary flood of the Ebro as it passes through Novillas, the Ribera Alta municipality where this Sunday it reached 8.5 meters in height, is already on a downward trend. The The peak of the flood will arrive this Monday in the towns of Pradilla and Boquiñeni, according to Europa Press.

“The Avenida del Ebro is now in Aragon, after reaching its highest point in Novillas we are hoping that in a couple of hours it will be able to reach Boquiñeni and Pradilla “, said in RNE the counselor of the Aragonese Presidency, Mayte Pérez.

“INTERVIEW | @ MaytePerez2, counselor and Presidency and spokesperson of the @GobAragon

“It has been an intense night […] We expect the flood to reach 2015 levels or even slightly higher. “

The mayor of Pradilla del Ebro, Raúl Moncín, has confirmed in Las mañanas de RNE that “as a precaution” people with reduced mobility have been evicted and they have asked the rest of the neighbors to be prepared in case the situation is worse than expected. “What you have to do is clean the riverbed,” claimed Moncín, to avoid greater evils in the future.

The mornings of RNE with Íñigo Alfonso – Mayor of Pradilla (Zaragoza): “What you have to do is clean the riverbed” – Listen now

In addition, in this municipality of Pradilla, the buttes have been reinforced and the CP2 highways have been cut from the A-126 to Novillas, in Boquiñeni the CP-3 and the A-127a in the access to Gallur from the A-127.

In Zaragoza, the City Council has evicted the urbanization of Doña Sancha, the lower area of ​​the rural district of Alfocea and the evacuation of the urbanized areas of Casetón and Torre Villarroya in Movera has begun.

The Integrated Operational Coordination Center (CECOPI) has called a meeting this morning to analyze the situation, which will be attended by the President of the Government of Aragon, the Minister of the Presidency and Institutional Relations, Mayte Pérez, and the Government delegate in Aragon, Rosa Serrano.

In the Aragonese capital the flow of the river has reached 1,709 cubic meters per second and a height of 4.71 meters, according to the
latest data from the Ebro River Basin Authority.

About 300 members of the UME in Zaragoza

As a preventive measure, 55 residents of 23 homes on Pablo Herráez street were evicted in Novillas. Zaragoza municipality of Novillas, in an evacuation in which 16 agents participated of the Civil Guard, a body that has been reinforced with troops from Madrid.

The UME has 292 displaced personnel and the support of 102 vehicles and a helicopter to carry out its work and, since yesterday, the average water and sludge pumping equipment has been prepared for the extraction and forwarding of water loaded with suspended or dissolved material and a pumping capacity of 320 m3 / h.

“It only remains to wait and see how the hours go by and what the river holds for us,” the president of Aragon, Javier Lambán, assured the media last afternoon after a meeting of the Integrated Operational Coordination Center (CECOP) in Luceni ( Zaragoza), which was also attended by the mayors of the riverside municipalities and the president of the Ebro Hydrographic Confederation (CHE), Dolores Pascual.

In addition, the Red Cross has mounted beds for two hundred people in each of the Luceni and Tauste pavilions (Zaragoza), which have been set up as temporary shelters, which are voluntarily in charge of the Emergency Immediate Response Team (ERIE) of the shelter and psychosocial of the organization and to which part of the evacuated neighbors of Novillas have previously been transferred performance of antigen tests.

Theater reviews: A Number | all of Me