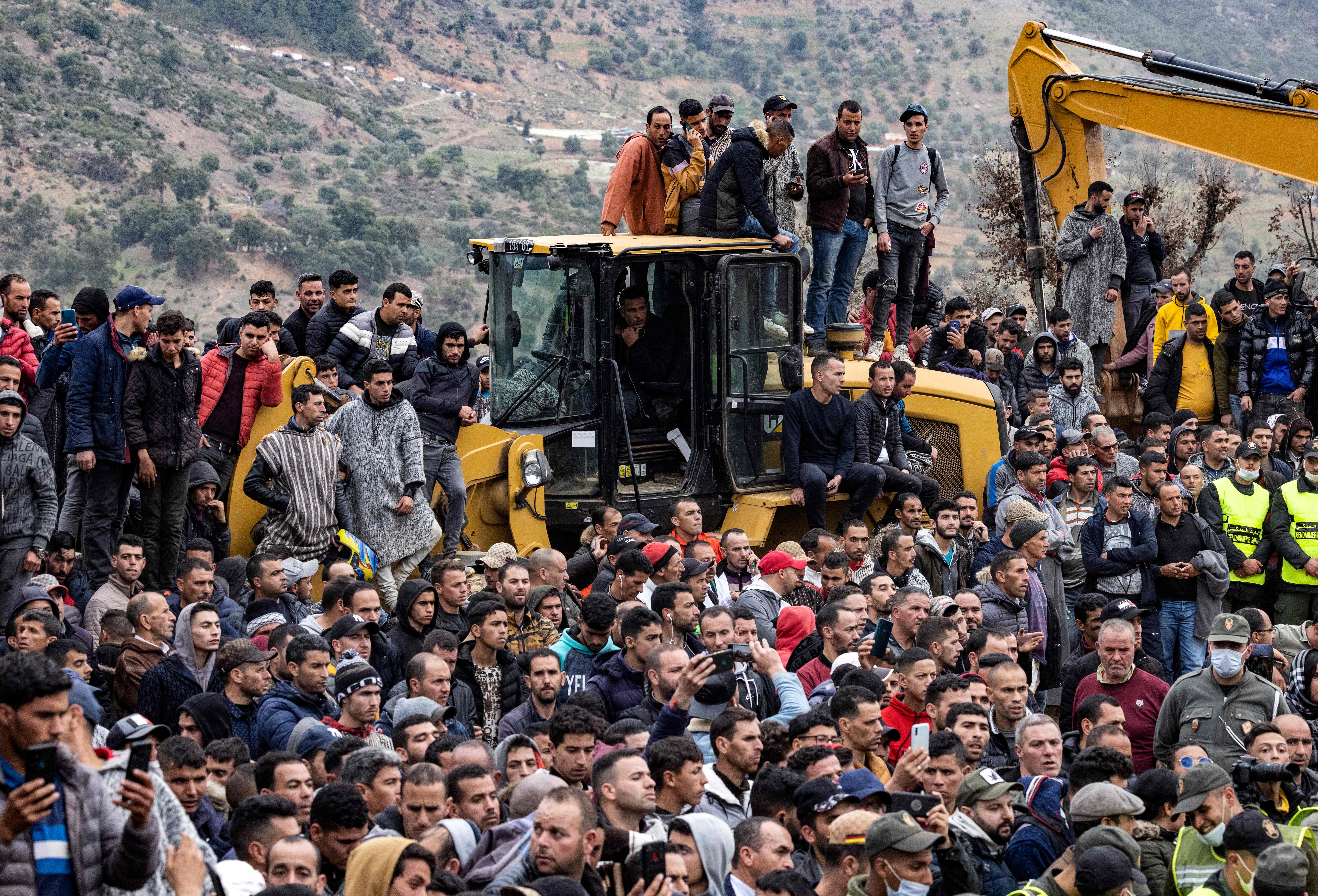 Egrán, the village where little Rayan lived, woke up this Sunday almost empty. Three boys took six goats out to eat at nine in the morning. The last journalists were collecting their belongings. The mountain was full of small empty water bottle containers, one of the few traces left by the hundreds of young people who accompanied the rescue for several nights. To a place of poor people poor people were arriving from all parts of Morocco. And many found shelter to sleep. But now, the home of the boy who was dragged out dead after spending four days buried in a well seemed emptier than ever. The family had disappeared, exhausted after so many sleepless nights.

Some member of the auxiliary gendarmerie forces remained in Rayan’s house. The man chatted with those who were arriving, showed them the huge gap that had opened in four days and even held down a reporter so that he would not step right on top of the 18-inch-diameter hole through which Rayan fell. The well was attached to the house, next to a wall. And now, under the house there is a huge embankment of more than 30 meters where it is scary to even look out.

All that landscape that can be seen from Rayan’s house, those Rif mountains where people survive by planting hashish, is full of steep ravines, very narrow dirt roads, places where a big scare can strike at any moment . Life is hard in places like Egrán. And Morocco is full of villages like that, where people live from day to day, with their stone oven at the door of the house.

Perhaps for this reason, because they know that Egrán’s family is one of many who fight for their daily bread, many Moroccans took Rayan’s ransom as their own, as if the child touched them. Until the last minute, even when the rescuers removed his lifeless body, on Saturday at 9:32 p.m., the hundreds of young people who were there believed that he had come out alive. But immediately the Moroccan media spread the message from the Royal Palace in which King Mohamed VI conveyed his condolences to the family.

The message said that “Her Majesty” had closely followed the rescue and had instructed to use “all possible efforts” to save the boy. “But the will of God is unstoppable and the child has responded to the call of the Most High,” she noted. The monarch thanked the display of “solidarity” shown towards the child’s family.

At Rayan’s home, at 11pm on Saturday a female member of the family started screaming and two men grabbed her and pulled her into a room. After the news of her death, the suffering was carried in silence. Everyone at that time was trying to help the one next to him in Rayan’s village. Whether it was offering to drive someone to the nearest town, about 15 kilometers away, or providing a phone charger, or simply smiling at the stranger.

A good part of the country seemed immersed during the four days of rescue in that feeling of brotherhood. Moroccan international players such as former Madrid player Ashraf Hakimi wrote messages on social networks. From Algeria, the country with which Morocco has a diplomatic conflict that has worsened in the last year, the rescue was the most followed news. Famous Algerian players such as Youcef Belaili, Riyad Mahrez and Ismaël Bennacer sent messages of support to the family. The policy of hostilities between Algeria and Morocco will continue its course. Nobody can expect anything else, at the moment. But the solidarity between very close peoples also persists.

Messages also arrived from the other shore of the Mediterranean. This Sunday, while three children from the village collected the garbage in a sack, far away, in Saint Peter’s Square, in Rome, Pope Francis sent a message of thanks to the nation in French: “The whole town was there to save a single child.” Condolences also came from almost all the embassies in Morocco, as well as a message from French President Emmanuel Macron addressed to Rayan’s family and the Moroccan people, where he said that he shared the pain.

Rayan’s case has brought to light, also among many Moroccans, the rescue of Julen, on January 26, 2019 in Totalán (Málaga). Rayan was five years old and Julen, two. The diameter of the Julen well measured 25 centimeters and that of Rayan, 45. The Rayan hole had a depth of 32 meters and the Julen one, around 100. The operation to rescue the Moroccan boy lasted four days and that of the Spanish, thirteen. The final autopsy of Julen, released three months after his rescue, revealed that the child had died from two blows suffered when falling down the well. He died the same day of the fall, on January 13. Rayan, however, was alive when he fell last Tuesday, according to what several relatives told this newspaper, who had managed to record him on video by inserting a telephone with a rope.

The dramas in Morocco, as everywhere, have always existed. On January 24, for example, three Nigerian children, all under the age of seven, were burned to death when the shack they were in burned down, on the outskirts of Nador, opposite Melilla. The mother, who was with them, died just days later from burns.

However, it has been the Rayan drama that has kept the country on edge. And the one who has brought out the best in each one.