The heavy rains in Euskal Herria in the last hours they have left a landscape of streets and roads flooded and rivers overflowing in Navarra, Iparralde and Gipuzkoa, although there are also difficulties in Álava; the situation in BizkaiaInstead, it is normalized.

By territories, in Navarra, the flooding of the rivers, which has caused flooding in the north and in the Pamplona Basin, will arrive in the south of the Autonomous Community in the last hours of Friday. The Government of Navarra remains vigilant in the situations that the Arga River may cause in the towns of Falces, Funes and Peralta.

The flood of the Ebro river in the Ribera de Navarra could occur after midnight. In this situation, the Tudela City Council has activated the flood emergency level 0; The Local Police of Tudela has recommended to the residents of the areas near the river, mainly underground garages on Paseo Pamplona and the Verjas area, to remove the vehicles.

In the north of Navarra, in Sunbilla, a person has died after a landslide on a shed, which in turn has collapsed on a vehicle, where the deceased person has been found.

For its part, Pamplona It has experienced the largest flood of the Arga River in the last two decades. The floods have caused the closure of streets and various areas, after being flooded by water. Pamplona Municipal Police officers have had to rescue 23 people throughout the morning in seven interventions due to the floods. They have occurred mainly in the Rochapea area, although similar situations have been experienced in Villava and Burlada. 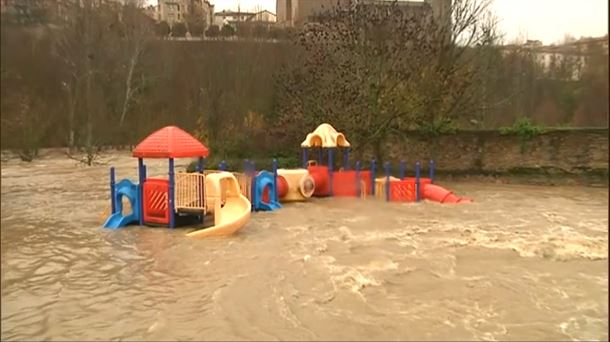 The situation tends to stabilize in Pamplona, ​​although this is not allowing, for the moment, the opening of the streets and areas that had been flooded. The flood has also affected other towns such as Arruazu, Santesteban, Olabe, Urroz-Villa, Ibero, Bera, Arazuri, Etxauri or Navascués.

Also in Iparralde it has been a difficult day. The Urdazuri river has overflowed between Senpere and Azkaine, and the Bidasoa has done so at the height of Biriatu; The situation, as the morning progressed, has calmed down, but it has not done so in Baiona, where Errobi has overflowed at high tide. 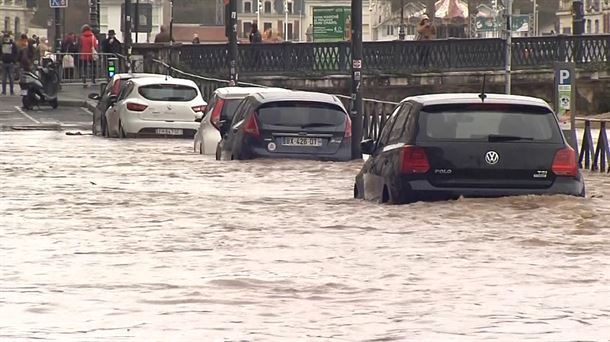 In Lapurdi, Baja Navarra and Zuberoa, the orange alert is maintained due to heavy rains and floods, and the A-63 motorway in Baiona, in the direction of Landas, is closed, while heavy vehicles are not allowed to pass in Biriatu.

In the CAV, in Gipuzkoa, the orange alert for rainfall is maintained until 9:00 am this Saturday, while in Álava and Bizkaia the yellow warnings will be activated until that same time.

Due to the state of the rivers, and weak to moderate and locally persistent rainfall is expected, the risk of flooding remains in Gipuzkoa, Bizkaia and Álava. The most critical moment on Friday will be the second high tide of the day, around 9:45 p.m.

The rains and the flooding of the rivers have had a notable impact on Gipuzkoa. In Irun, homes and shops have been flooded in Behobia, and in Mendaro, the hospital has been isolated, although health activity is developing normally, except for a few outpatient consultations, as reported by Osakidetza. 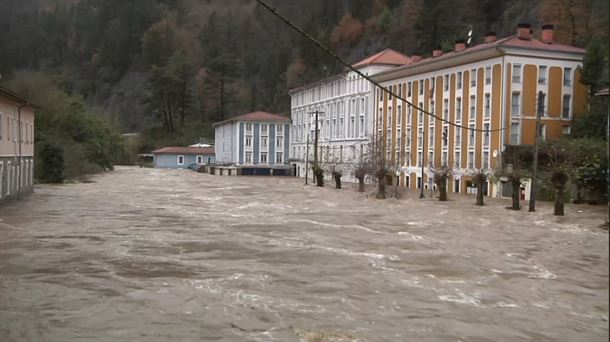 As has been said, in Irun the main problems have been experienced in the Behobia neighborhood, as a result of the overflowing of the Bidasoa at dawn, especially in the Mendipe area, although its level is decreasing. In addition, several trees have fallen in the Bidaurre-Ureder polygon.

In Mendaro, in addition to the accesses to the hospital, the neighborhood of Garagartza, flooded by water, has been very affected, which has flooded the lower floors of the houses.

In Eibar there have been incidents on several roads, including the variant, cut at the height of Matsaria and Asua-Erreka by separate landslides.

Andoain is also among the affected localities and, although to a lesser extent, some problems have also been recorded in San Sebastián, such as the fall of a tree on the roof of the Josean Gasca sports center, and the flooding of the Okendotegi area, where it has been overflowed the regatta, as is usual in these circumstances.

The basins of the Oria, Deba, Urumea and Bidasoa rivers have reached the red alert level in some points, although after noon, at low tide, only the Urumea remained at a red level in Ereñozu, while the flow of the rest has dropped to orange level.

The gauging station that has recorded the highest rainfall in the CAV is the one located in Eskas (Artikutza), which in the accumulated of the last 24 hours has registered 163.7 liters per square meter, 36 this Friday until 10:00 hours, according to data from the Provincial Council. The 100 liters have also been exceeded in Bizkaia, specifically in Urkiola, with a cumulative of 100.2.

In Álava, the Uribarri Ganboa and Urrunaga reservoirs are between 94 and 95% of their capacity, and they will go from discharging 75 cubic meters per second to the Zadorra River to 135 in the next few hours, which will represent a very high increase. significant flow and will affect six councils at the head of this river: Mendibile, Arroyabe, Urbina, Durana, Luko and Amárita. 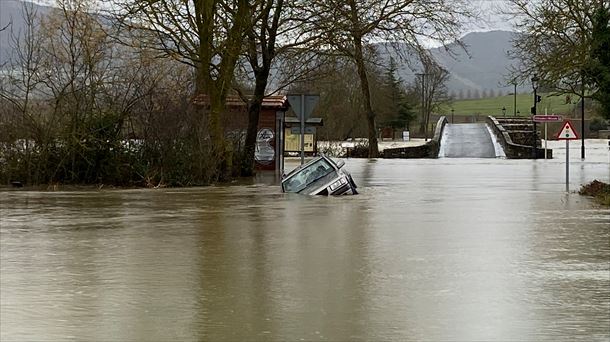 The mayor of Vitoria-Gasteiz, Gorka Urtaran, explained that the Zadorra as it passes through Vitoria is also going to be affected by the increase in the drainage, after two days of flooding in several areas near the riverbed, which have forced the eviction of a score of residents of the Asteguieta council.

In Bizkaia, the rains have given a truce late in the morning, which has allowed the A-68 to reopen in Orozko, which has been the main problem caused by the rains this morning in this territory. However, the BI-633 remains closed in Mallabia in both directions, at the height of Trabakua, due to a landslide that will take about two weeks to be corrected; in Álava, the N-622, at the junctions with the A-1 in Vitoria, is cut off in both directions by the overflowing of the Zadorra.

While the highway cut in Trabakua continues, the connection between Durango and Markina / Ondarroa must be made by highway, to or from Ermua.

In Gipuzkoa, the N-634 is cut between Mendaro and Deba, as well as its passage through Eibar by a landslide. The incidents in the secondary network are numerous.

In the middle of the afternoon, in Vitoria-Gasteiz the Avenida del Zadorra as well as the Portal de Foronda remained closed, while in Gipuzkoa the GI-627 in Leintz-Gatzaga is closed, due to detachment, from the top of Arlaban towards Vitoria-Gasteiz . The N-634 is cut off in this same territory, at the access to the Mendaro hospital, between Mendaro and Eibar and between Mendaro and Deba.

In total, the Ertzaintza kept open on Friday afternoon 67 actions due to as many conditions in the road network, caused by rafts of water, landslides, falling trees or overflows.

In addition, rail traffic between Beasain and Brinkola continues to be interrupted, and Adif operators continue working to solve the problem caused this Thursday by a landslide, which is forcing Renfe to carry out bus transfers between the affected sections.

In addition to the rain alerts, another yellow warning is added for navigation risk, until 9:00 a.m. on Saturday, because waves of 4 meters high are expected that will go down until they reach 3-3.5 meters.