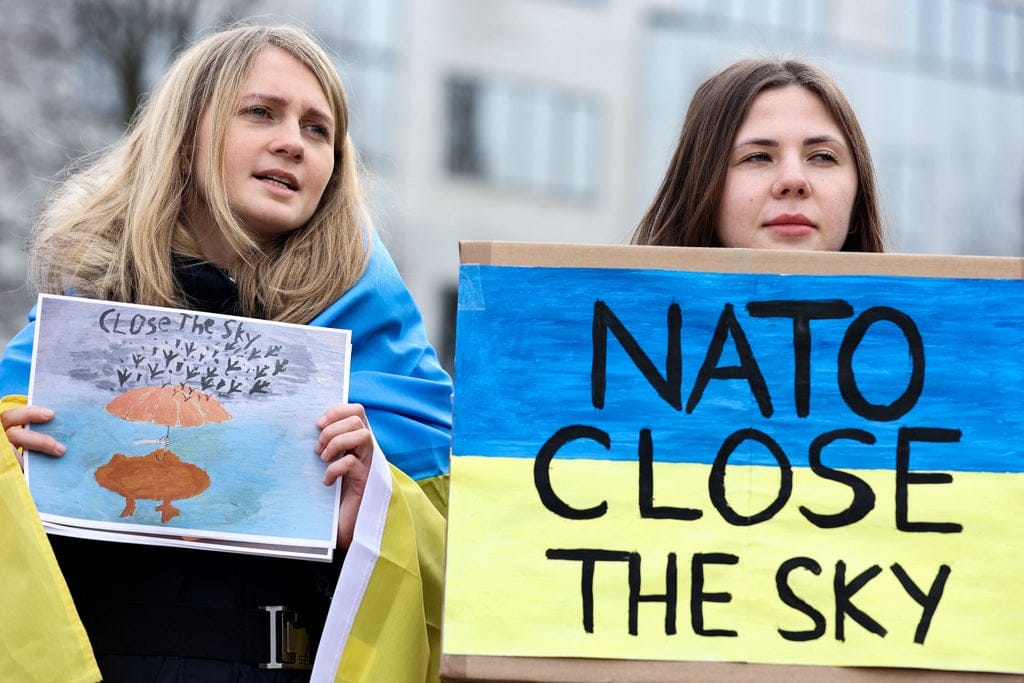 Western sanctions against Russia have been the subject of much debate lately, especially given their past record. Let’s just say the evidence is decidedly mixed.

There is scant sign of sanctions having had much influence over Iran’s theocratic establishment or North Korea’s Kim dynasty – both of which continue to indulge in periodic hissy fits involving missiles. True, South Africa’s apartheid regime eventually crumbled, but it took years to do so.

Some fear the sanctions may end up strengthening Putin, at least in the short term, by serving the war criminal’s paranoid narrative and pushing Russians who were sitting on the fence into his camp.

“He might be a bad guy, but at least he’s our bad guy, fighting for mother Russia when the west is out to get us. Now where’s my iPhone so I can take a hammer to it. Anyone got a Chinese phone to film me on so I can post it? No?”

There was actually a Russian man who appeared to smash his iPad after Apple – a company that shies away from politics unless they involve taxes it doesn’t like – “paused” its sales in the country. But it could easily have been a set up. And if it wasn’t, good luck with getting a new one matey.

This is not the only potential downside. Global payment companies cutting Russia off could inconvenience dissidents even more than Putin’s fanboys. It can be tough to use a VPN to get around Russia’s blocks on websites if you can’t use your credit card to pay for the service.

It is better to punish Putin’s corrupt network of oligarchs than ordinary Russians, the argument goes. But how much good does even that do you given their apparent inability to influence Don Putin?

Worthy as the discussion is, it has largely missed the role of western public opinion in all this. It needs an outlet.

As we are confronted with scenes of bombed out cities, suffering people, parents grieving murdered children, lifeless bodies being removed from piles of rubble, and schools set up in bomb shelters – the clamor to “do something” gets louder.

Loud enough for politicians answerable to angry electorates to hear. Which obviously raises a nasty dilemma: do you want to start world war three? A war with a nuclear power?

The answer, painful as the scenes we are witnessing are, is not. A line in the sand has been drawn at the borders of Nato.

But to assume public opinion, Russia’s naked aggression demands a response. Set against that, the debate over what form sanctions should take, and whether they will prove effective over the short, medium or long term, looks less irrelevant.

They have been hurting too, despite Putin’s shrill denials, and despite the uncomfortable fact the Russian exchequer is still earning through exports of gas and (deeply discounted) oil.

The country has been cut adrift. Western consumer goods are vanishing. Our own cost of living crisis – exacerbated by the conflict – pales in comparison to the inflationary surge starting to grip Russia. Interest rates have shot up to 20 per cent. The oak has stabilized, a bit, but it has still hit record lows. The exchange rates you’ll find quoted in the financial press will look fantastic to the average Russian seeking dollars.

They would be wise to grab hold of them. Worse conditions are on the way. When JP Morgan talks about a 9 per cent hit to Russia GDP – as it did earlier this month – it looks bland. That’s not far off what the UK experienced during Covid.

In practice it will be anything but bland. Forecasts are liable to deteriorate as the screw tightens and there will be no rapid bounce back. The consequences for Putin’s great power fever dream, for his tame oligarchs and ordinary Russians, will be profound.

Some of them will be entirely innocent victims. That doesn’t just include dissidents but ordinary people just getting by. Is it morally justifiable to be punishing them?

The obvious answer is: have you seen the pictures coming out of Maripol? Oh Kharkiv? Or Kyiv? Who has it worse?

Sanctions might also make others think twice before launching similar disastrous adventures of their own. This isn’t just about Russia.