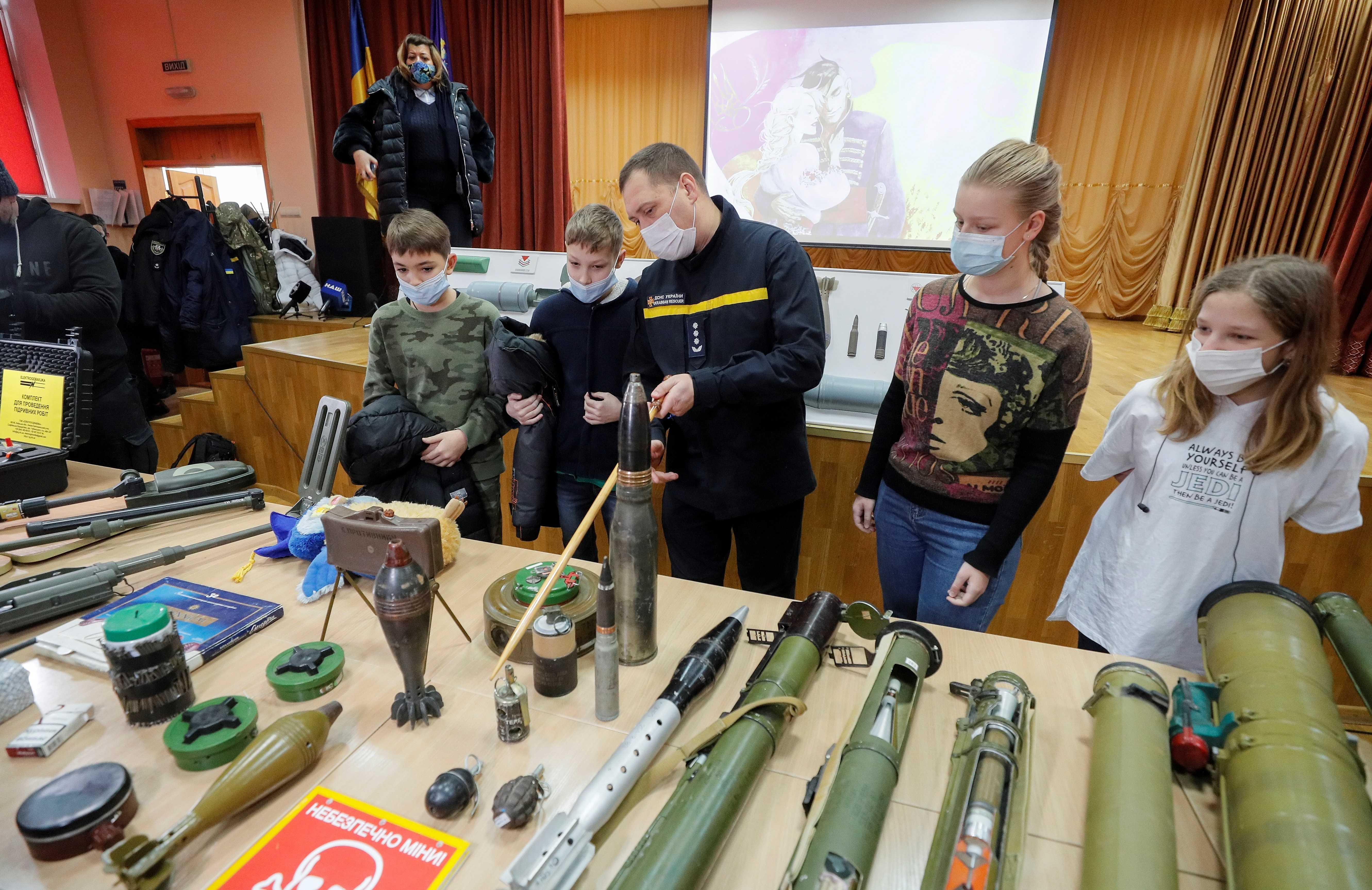 The European Union claims to be ready to immediately punish Russia with historic economic sanctions if Moscow orders the invasion of Ukraine. But that unity of the 27 partners of the Union runs the risk of cracking, according to community sources, if the Russian president, Vladimir Putin, opts for a harassment of varying intensity against Kiev or for a hybrid war in Donbas, the separatist region , of uncertain value. The Kremlin, for the time being, has asked for time to evaluate the responses of NATO and the United States to the leonine Russian offers of negotiation. A pause that gives Putin the opportunity to accentuate the different positions that exist between the EU partners and to make visible a division that had disappeared in the face of the threat of a war.

“The EU is trying to portray itself as an actor with an idea of ​​unity towards the Russian military escalation, ensuring that there will be very serious sanctions in case of aggression,” says Ionela Maria Ciolan, a researcher at the European Policy Center analysis center. “But this is the bureaucratic response from Brussels. When we look at the member states, there are different degrees of support for Ukraine and different attitudes.” This variable sensitivity basically depends “on the different relations with Russia,” according to analyst Ciolan.

The categories range from the belligerent countries of the East, with the Baltics in the lead, eager to support the shipment of weapons to Ukraine, to authentic “Trojan horses”, in the words of Ciolan, such as Hungary or Bulgaria, closer to Moscow. In the middle are France and Germany, the two great military powers of the EU (after the departure of the United Kingdom), which try to temporize, but have not yet been able to articulate a united voice that leads the position of the EU, as used to happen in the times of former Chancellor Angela Merkel, according to this analyst. “She lacks her leadership in Brussels,” says Ciolan. And that continues to leave the EU without a “strategic compass”, she adds, and with its security architecture in the hands of the United States and NATO.

“I see little appetite for a full commitment to take action against Russia in several European countries,” says Simone Tagliapietra, an analyst at the Brussels-based Bruegel think tank. Tagliapietra has just published a study, along with other colleagues, on the blow that a hypothetical cut in the supply of Russian gas in Europe would entail. Germany, she explains, highly dependent on fuel from Moscow, would be the most exposed to this blow, with enormous economic consequences. Which perhaps explains, in part, Berlin’s position. “I see, like everyone else, Germany being reluctant to provide military support [a Ucrania]”, adds this analyst. Also Italy, in the process of electing a president, is plunged into silence. “It is not at all clear what the EU governments want to do,” concludes Tagliapietra.

“Biden has it very easy because he represents a single country and can adopt sanctions quickly, we need unanimity and for everyone to share that there are reasons to adopt them,” says a community source. Should the time ever come to react to an attack that was not clearly an invasion, there would be a big debate in Brussels and the positions of the Twenty-Seven could be roughly divided into four blocs.

Poland and the three Baltic countries (Estonia, Latvia and Lithuania) are calling for very severe punishment against Russia and in some cases have even called for a pre-emptive trade strike. The four countries feel threatened by Putin and, in the case of Poland and Lithuania, directly harassed through Belarus, which during 2021 organized a wave of migration from third countries to Polish and Lithuanian territory.

The Baltic area, moreover, was already, before the Ukrainian crisis, the greatest point of border friction between the EU and Russia. In 2021, NATO aircraft intervened 370 times in Europe to intercept flights of non-Alliance aircraft. On 290 occasions they were Russian military planes and almost always over the airspace of the Baltic countries. For those states, the sanctions against Russia must be very harsh. This group could be joined by some community partners from the southeast, such as Romania, which shares the largest land border with Ukraine, fearful of some friction with the gigantic Russian neighbor.

France heads the group of European countries in favor of reaching an agreement with Moscow to restore stability on the eastern flank of the continent. The French president, Emmanuel Macron, plans to speak this Friday with Putin, to test that possibility. In addition to France, those in favor of temporizing count Spain and, above all, Germany among their ranks. The three countries defend the need to be intransigent with Russia if a military aggression against Ukraine is consummated. But they are determined to exploit all possible diplomatic avenues as long as there is a chance to avoid conflict. Numerous European partners (such as the Benelux or Portugal) could join this group, especially if dialogue with Moscow advances. If the negotiation fails, Germany is the country that has the most to lose, both because of its economic and historical ties with Russia, and because it will be forced, in all likelihood, to give up Nord Stream II, a recently completed gas pipeline linking the two countries but has not yet been released.

Moscow has more or less close allies within the EU, whose degree of tolerance towards Putin’s attitude varies according to very diverse interests. Not even the closest ones, such as Italy, Hungary, Austria or Cyprus, have dared to oppose the sanctions against Russia for the annexation of Crimea. And they would support, according to Brussels, the punishment for a new military aggression. But tempers may falter if Ukraine is constantly harassed but without a recognized invasion from abroad.

The Italian-Russian Chamber of Commerce did not hesitate this Wednesday, despite the tension around Ukraine, to hold an event with the presence of the main Italian companies and Putin’s videoconference intervention. And Hungarian Prime Minister Viktor Orbán is even scheduled to visit Moscow on February 1 and meet with Putin to strengthen already close economic ties: Hungary was the first member state to receive the Russian vaccines.

Possible Trojan horses, which could also include Bulgaria, could invoke special interests so as not to second a punishment to Russia if there is no clear aggression: Italy, its important commercial links; Cyprus, its close financial relationship or Malta, its dependence on Russian gas. Budapest is also using the situation of the Hungarian minority in Ukraine to limit its solidarity with that country.

ears to the wolf

The growing aggressiveness of the Putin regime has triggered alarms not only in neighboring countries but also in others that are further away and that maintained a historical neutrality. This is the case of Sweden and Finland, EU countries that do not belong to NATO, but that this very week have reaffirmed their right to join and have announced a reinforcement of their close collaboration with the Alliance. Or from Ireland, which at the other end of the European board has warned this week with concern that Russia is going to carry out naval maneuvers with 140 ships and 10,000 sailors just 200 kilometers from the Irish coast.

The precedents of Crimea and Belarus

In favor of a quick agreement in the EU to adopt sanctions, the precedent of retaliation imposed after Russia’s decision in 2014 to start aggression against Ukraine plays. Moscow agreed on March 1 of that year to use force in the east and south of the neighboring country. And the first retaliation, very mild, was approved two days later. The sanctions were tightened as the Russian aggression and in particular after the occupation of the Ukrainian peninsula of Crimea. Since then, the sanctions have been unanimously revalidated every six and remain in force.

Community sources, however, point out that on other occasions there have been greater delays. This was the case of the sanctions against Belarus for the alleged rigging of Alexandr Lukashenko in the August 2020 elections. The European punishment took months to arrive because some partners resisted or made their support subject to concessions in other files unrelated to Belarus.

“This will not happen this time, no one will dare to haggle if there is a military invasion of Ukraine, it is too serious,” EU High Representative Josep Borrell predicted on Tuesday during an act in Brussels of the European Institute of Studies of security. But at the same event, the former Prime Minister of Finland and current director of the school of governance at the European Institute in Florence, Alex Stubb, warned that “Putin is not looking for a global conflict of great magnitude, but rather to provoke a conflict and keep it going.” frozen”. A violent but immobile scenario that, if confirmed, could bring out the European division.