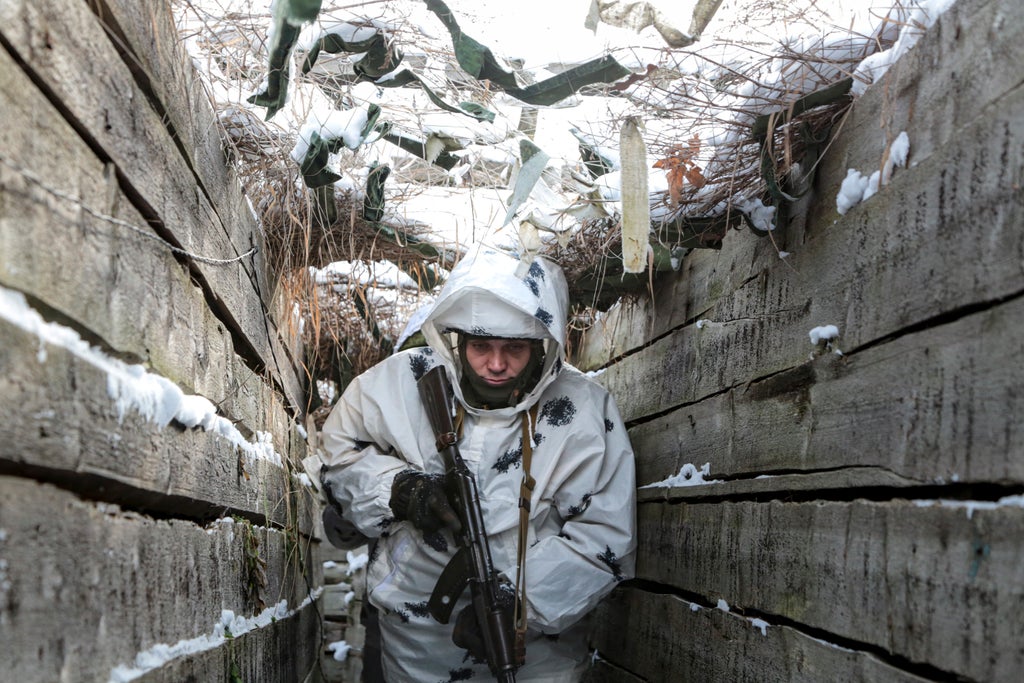 The Ukrainian president has told the West to avoid creating “panic” over the buildup of Russian troops on his country’s border.

Downplaying fears of a possible invasion next month, Volodymyr Zelenskyy said unnecessary alarm had prompted foreign investors and diplomats to withdraw from Ukraine. “We don’t need this panic,” he said.

He also described the decision by the US, UK, Australia, Germany and Canada to withdraw some of their diplomats from Kiev as a “mistake”. “Captains must not abandon ship,” he said. “I don’t think we have a Titanic here.”

His call for calm came as Russian President Vladimir Putin criticized the latest US proposals to ease tensions and said they ignore his demands.

He said he would not start a war in Ukraine, but Russia warned that the United States and NATO have left little room for compromise.

In a phone call with French President Emmanuel Macron, Putin said the West has failed to consider Russia’s basic conditions.

The Kremlin said this halted further NATO expansion, halted the alliance’s deployment of weapons near Russian borders and withdrew its forces from Eastern Europe.

But after weeks of silence, Putin has said he is ready to talk more.

His conversation with Macron on Friday was serious and respectful, with the two leaders discussing “the need for de-escalation”, according to a French official. It is understood that Putin made no concessions.

According to a Kremlin account of the phone call, the Russian president said he would study the US and NATO response before deciding on the next step.

The United States and NATO rejected Putin’s demands this week, but Washington outlined areas where it said discussions were possible amid the buildup of more than 100,000 Russian troops near Ukraine.

Russia has denied that it is planning an attack.

The United States has warned Ukraine that there is a “distinct possibility” that Russia could take military action in February.

But today, President Zelenskyy spoke about the threat of an imminent invasion. “We are not seeing a bigger escalation than before,” he told a news conference.

He suggested that the Russian troop buildup could be an attempt by Moscow to sow panic and exert “psychological pressure.”

Western alarm about an impending invasion was “cost[ing] Ukrainians expensive,” he said, and had prompted investors in the country’s financial markets to withdraw money.

Ukrainian officials have been anxious to project calm.

Defense Minister Oleksii Reznikov told parliament that the number of Russian troops near Ukraine, some 130,000, is comparable to Moscow’s military buildup last spring, when Russia finally withdrew its forces after massive exercises.

NATO has said it is beefing up its deterrence in the Baltic Sea region, and the United States has put 8,500 troops on high alert for possible deployment to Europe.

Russia has launched military exercises involving motorized infantry and artillery units in southwestern Russia, warplanes in Kaliningrad on the Baltic Sea, and dozens of warships in the Black Sea and the Arctic.

Russian troops have also headed to Belarus for joint drills, raising fears in the West that Moscow could stage an attack on Ukraine from the north.

Meanwhile, the US and the EU have pledged to work together to secure Europe’s energy supply following fears that an armed conflict could disrupt Russia’s natural gas supply.

In a joint statement, US President Joe Biden and European Commission President Ursula von der Leyen said they were seeking “diverse sources around the world to avoid supply crises, including those that could result from a new Russian invasion of Ukraine.