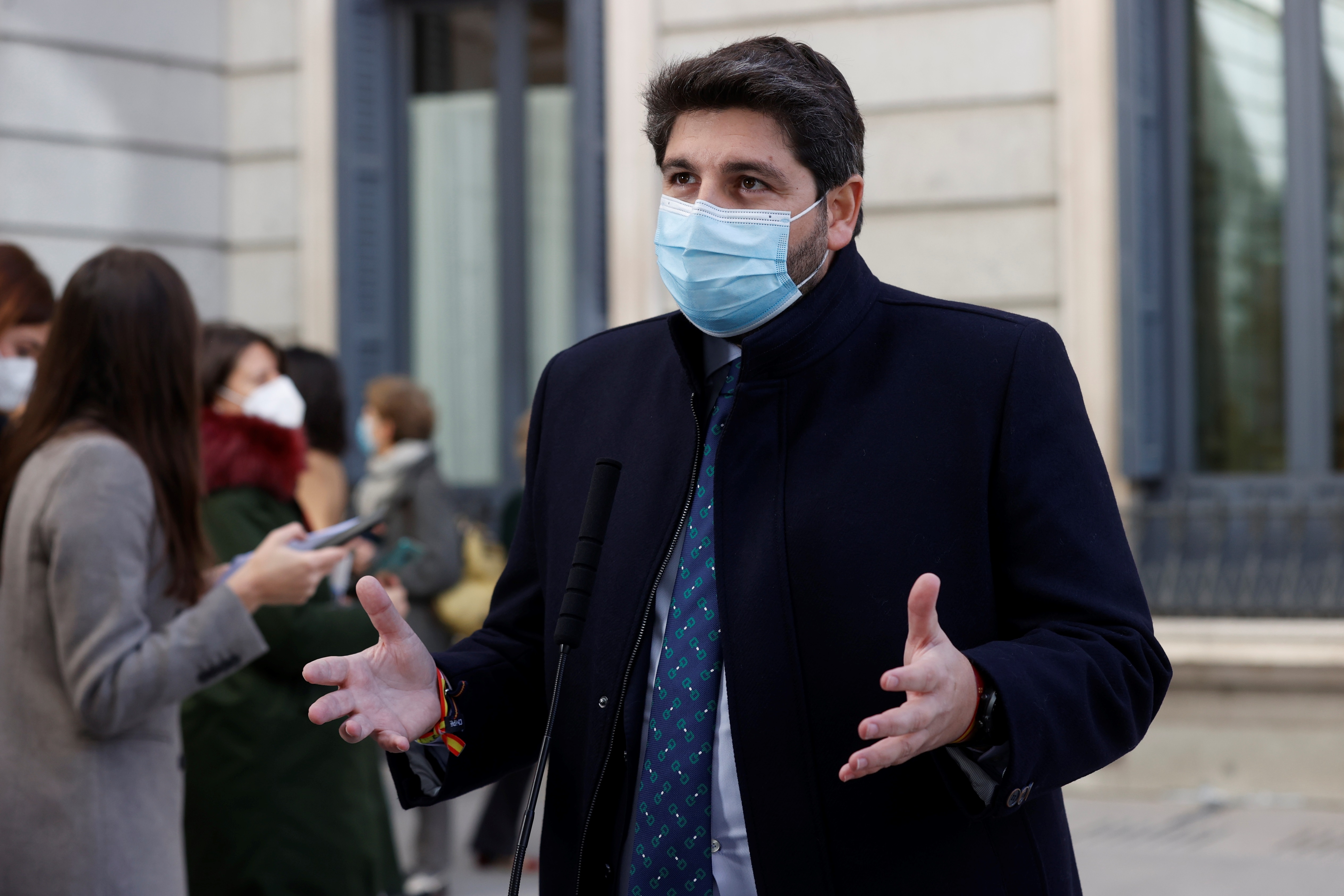 The brake on the processing in the Congress of Deputies of the Statute of Autonomy of Murcia, approved at the end of the last legislature, has opened a legal mess that will foreseeably reach the courts. The new text was approved unanimously in April 2019 with Fernando López Miras at the helm and needed, as in the rest of the cases, its approval in the Cortes Generales. But, after the sending of the new law from Murcia to Congress, the groups of PSOE, Ciudadanos and Unidas Podemos in Parliament presented several amendments. Among them, the limitation of mandates to only two legislatures – so the president of the Region of Murcia could not run again in elections – or measures against political defectors, – which would return the power of the regional group to Ciudadanos , after the failed motion of censure last March. The amendments presented – prompted, among other conflicts, by the failed motion of censure – received the frontal rejection of the Murcian Government, which last Wednesday maneuvered to prevent the Statute of Autonomy from finally entering into force with those changes.

To achieve its purpose, the Executive of López Miras reformed the regulations of the Murcia Assembly on Wednesday. Specifically, the PP and the seven defectors approved the modification of article 221 of the regulations of the Autonomous Parliament. A change that allows the text presented in the Cortes Generales to be withdrawn without the need to gather any type of majority, which was the case before. That enabled the Plenary, which met just one day later, to vote in favor of removing the new Statute of Congress and thus slowing down its processing. Also only with the support of the popular and defected parliamentarians.

See also  Where is Prince Philip buried - and where will his final resting place be?

The opposition’s strategy now happens because the Board of Congress, which has to accept the withdrawal of the Statute in the coming days, invalidates the move of the López Miras Executive. In principle, the popular could benefit from the resolution of the Presidency of Congress of September 25, 2018 that allows “the Assembly of an autonomous community, whose Statute is subject to reform” withdraw the proposal “at any time during the processing of reform”. And in that sense the Table will pronounce itself. Congress sources confirm that “they will accept the withdrawal of the Statute” and that it is not their responsibility to enter or not enter the legal background of what happened in Murcia last week. In this sense, the same sources indicate that the courts should decide whether or not it complies with the law.

Among the opposition to the measure adopted by the regional PP is the coordinator of United We Can in Murcia, Javier Sánchez, who is also the third secretary on the Board of Congress. The deputy explains that the reform raises an “anomalous” situation because the modification introduced by the PP in the Murcian regulation cannot affect a previously processed norm, such as the Statute of Autonomy, which was approved in 2019. And it will base its defense on the “Principle of non-retroactivity”. Sánchez fears that the conflict “will end in the Constitutional Court” and warns that “they will go ahead even in the courts if necessary.”

From the Murcian PSOE they trust more in another fringe that was left open last week. Alfonso Martínez, deputy spokesperson for the parliamentary group in the Assembly, explains that by not specifying, after the modification of the regulations, what is the majority required from now on to withdraw the Statute, it would have to be the same that approved its presentation, three fifths. A fringe that, according to Martínez, is reinforced by the lawyers who have been consulted. And he denounces that the movement of the Assembly was made “without asking for a legal report,” as they were required to do so.

Citizens regret that a Statute “that put Murcia in the 21st century” has finally been rejected. “The PP of López Miras is savage. Agree with whoever is necessary to stay in power ”, assures the senator of Cs, Miguel Sánchez. The regional leader recalls that the limitation of the two terms was something that was already in force in the Region when the new Statute was approved and that the popular president modified the law to his interest last June to be able to repeat a third term. “That’s why that amendment was introduced,” he adds. The party emphasizes, however, that the popular ones did not even propose to negotiate and that Cs could have been open to removing this amendment if in this way the Statute followed its course. Something that would not have happened, however, regarding the measures against the defectors or the amendment that gives legal personality to the Mar Menor. Impassable Issues for Citizens.

The PP of Murcia complains that the opposition groups have “opened a debate that was already closed and agreed in April 2019, when the Statute was unanimously approved by the groups present at the time in the Murcian Assembly,” says the spokesman popular, Quino Segado. The PP assures that it has been forced to raise the withdrawal of the congressional statute process because the 53 amendments presented at this time by the opposition have reopened the debate and there is no longer enough consensus to approve the text.

The popular ones maintain that they are “willing to approve the same Statute that was agreed in 2019”, but not with the new amendments of the opposition. Once the return of the Statute to the Murcia Assembly has been requested, the PP recognizes that “it will be very difficult for a new text to be approved in this legislature,” Segado points out, because “it will be very difficult to reach the necessary consensus.”