The area of ​​the Presidency of the Generalitat commissioned logistical support to CDRs for Quim Torra to lock himself up in the Parliament during an occupation of the Catalan chamber in response to the ‘trial’ sentence, as revealed to the Civil Guard by one of the detainees, accused of a crime of terrorism.

During the interrogation on September 25, the detainee explained that he had been IT security manager of a hypothetical occupation of the Parliament after the ruling of the Supreme Court, some plans that “came from the presidency” and that included “Quim Torra (with code name Gandalf) being locked up inside for D-day”.

According to the detainee, the order “did not come from the CDR, but was from a more bourgeois movement”, and the intention was to provide logistical assistance to “guarantee communications for a week” in the Parliament, without “spending limit“.

The detainee, FJ, who collaborated with the CDR due to his computer skills, warned that two powerful transmitters and a receiver were needed, according to his statement, and demanded to know the people from whom the order came “to ensure that their intentions they were real “, but never heard from again on that matter.

According to the Civil Guard report, based on the intervened telephone conversations, the order was “assumed by the ERT“-Tactical Response Team, a radicalized unit of the CDR to which the detainees supposedly belonged- at the end of last year, when they were in the phase of” consolidation and expansion. “

Apparently, the occupation of the Parliament was to be carried out by the “front door, since they would be facilitated access from the inside, “and they had to” resist “inside for a week, in which communications would be guaranteed by long-distance antennas using two safe houses and the Wi-Fi network of nearby establishments.

In fact, the Civil Guard has images of one of the detainees taking photographs in the Ciutadella Park, in the last Diada, and meeting with two other CDRs at the Parlament’s security fence, from which they deduce that they were carrying out a “field study“of the security measures of the camera and the deployment of the Mossos before concentrations.

One of the detainees wanted to make explosives

One of the detainees contacted businessmen, industrialists, individuals and businesses to try to acquire 200 kilos of paraffin, a hundred liters of different chemical products considered explosives precursors as well as laboratory material to be able to manufacture termite, according to the summary of the case.

Specifically, according to a report by the Civil Guard, “the products are being produced jointly in two places: Romeu de Sabadell street and Sant Jaume street in the town of Sant Fost de Campsentelles,” the place they called “The laboratory“; and at least Ros and the also detained Alexis Codina and Germinal Tomás would be participating in its preparation, who would be the”producer core“within” larger group “.

“The purpose of such activities responds to their determination to make dangerous compounds such as the Termite, as well as different types of explosives: Chloratite, Picric Acid, Anfo, etc., with the aim of being used against people or property in the framework of actions aimed at facilitating the secession of Catalonia and implementing the Catalan republic serving thus, according to their own opinion, the mandate issued by the Catalan people during the illegal referendum of October 1, 2017 “, says the Civil Guard.

See also  Roberto Leal: "I have my genius, I'm not Santa Claus, but I don't like cockfighting" | TV

VIDEO | The Civil Guard shows the ‘material to manufacture explosives’ seized in Catalonia: 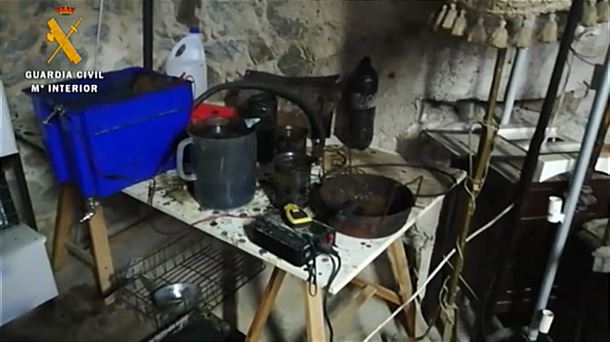