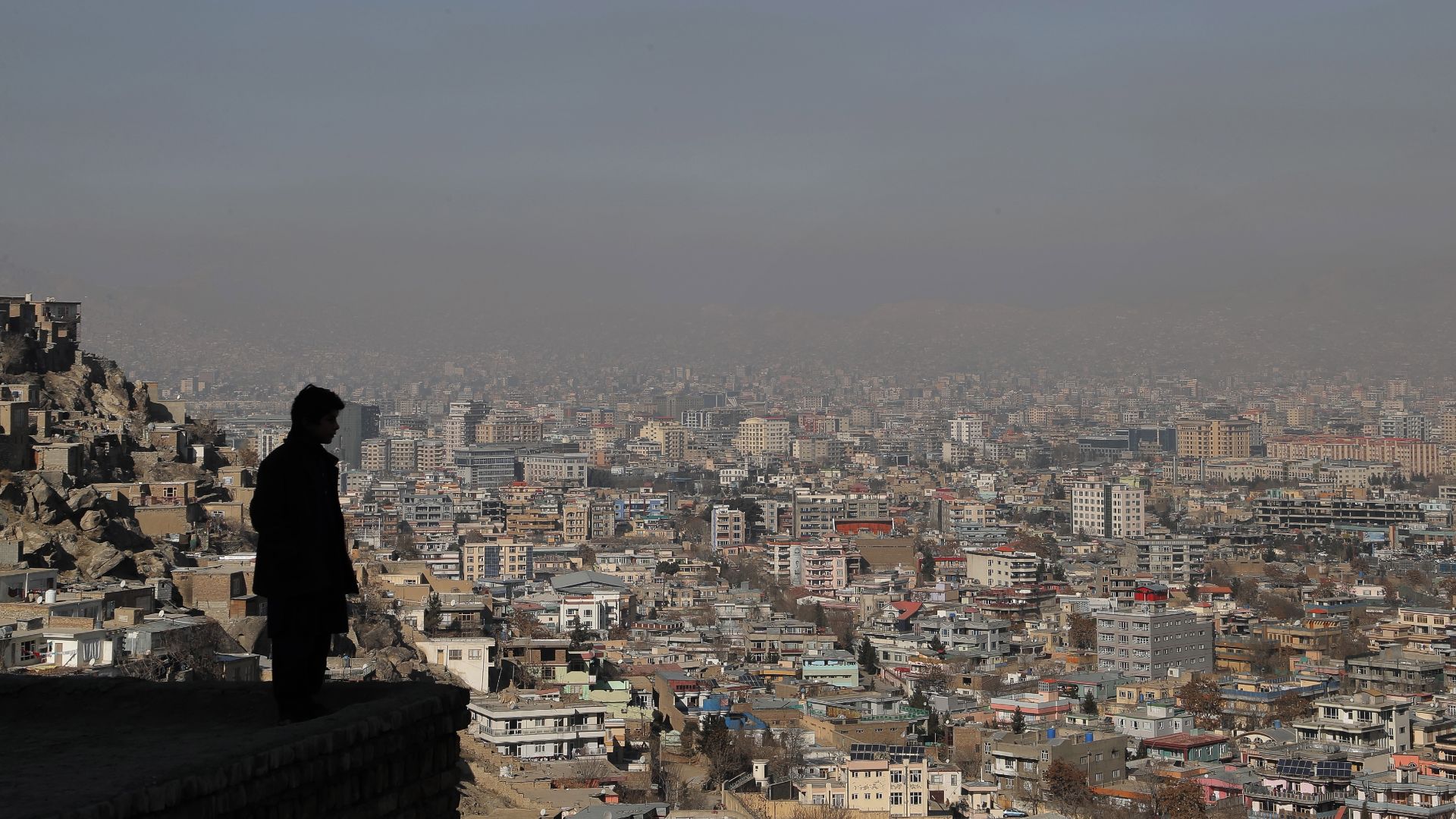 Four months after the Taliban uprising in Kabul, hundreds of Afghans they wait for documents from Spain to be able to leave their country. They are former collaborators of the Spanish presence in the Asian country or students of Spanish. A colonel in the reserve helps them with some procedures that can take months.

Among those who have been able to flee the new Taliban government is Fatima, who arrived in Madrid at the end of November with her husband and two children, with a single suitcase for the four of them. Behind he left Afghanistan, an academic career and all his family and friends. We meet her on a sunny and cold morning in the south of Madrid, next to the shelter where the Inclusion ministry has temporarily housed her.

“We are fine,” says Fatima while her children play in a park, “but I hope that soon we can really start our new life”. Fatima’s life was cut short with the return of the Taliban to power. He was not caught by surprise: “When the government changed,” he says, “we already knew what was going to happen: they don’t let women work outside and they force them to be at home”. For Fatima there was an extra risk, her past as a collaborator of the Spanish Defense Attaché in Afghanistan: “We knew they were going to kill those who had worked with foreigners. It is their way of thinking about religion, they don’t understand that we work with people of different religions ”.

Pressure from the Taliban on Fatima’s family reached the point, he says, that they tried to kidnap their children: “That day his father went to pick them up, but when he arrived, they told him they were not there. I called the school and they told me that a person had come through the back door and was taking them away. I told those at school not to let my children go and I ran to school. When I arrived, I verified that that person had information about us, he knew my husband and me ”. Since that day, Fatima decided that her children would not go back to school.

“And why did I have to stay at home? I have university studies, education, experience, with all that I can help others“

“We had no security or work,” he continues, and asks himself: “And why did I have to stay at home? I have university studies, education, experience, with all that I can help others. And I have to protect my children. None of that could have it in Afghanistan, where there is nothing”.

Fatima contacted the Spanish embassy a few days after the Taliban entered Kabul. They were about to leave the country on evacuation flights organized by the government. However, on the same day of his departure, he received a message from the Foreign Ministry advising him not to go to the airport, due to the serious insecurity situation.

“They told me they would inform me of the next evacuation,” Fatima recalls, “but October arrived and they still did not send me the papers to go to Pakistan. I couldn’t and didn’t want to wait any longer, so we drove. It was a two day road trip. We could not go by plane because it is very expensive, 2,500 dollars each ticket. In Pakistan, it took me a month to get an appointment at the embassy in Islamabad. After I was interviewed, I had to wait another two weeks until they finally gave me the visa. “

Fatima’s family has left in Kabul a newly bought house, a dental clinic and an academic and professional trajectory that, in Spain, will take time to recover. “We have hope,” says Fatima, who now he trusts in being able to bring the rest of his family and get them out of what he defines as “a life of risk”.

For Faryal, he responds in Spanish to our video questions from Kabul. He studied the language at the university in the Afghan capital. Behind her she has placed one of her paintings: she is a virgin with four doves. Faryal is a painter. “I am very afraid for my life and my future”, he tells us, “and also for my family, whoor may leave home for fear of explosions and the harassment of the Taliban ”.

The Islamists destroyed the workshop where Faryal painted. “I witnessed the day that the Taliban entered my painting studio and broke all my paintings,” he says while, in the background, a Kabul is seen where, he affirms, “every day I see murders of former members of the security forces of the previous government ”. According to the UN, with preliminary and conservative estimates, the Taliban have executed, without prior trial, 72 people linked to the former government, despite the announcement of an amnesty.

Faryal wants to leave Afghanistan. He is waiting for the visa that allows him to travel to Islamabad, and from Pakistan, to Spain.

It is the same path that Nargis, daughter of a former government colonel and, like Faryal, a former Spanish student at Kabul University, wants to take. Nargis has applied for roles for her husband, two children and her mother. He also tells us by video that “the security crisis and the war have caused many problems in the lives of Afghans. There is a lot of poverty and unemployment and robberies have increased ”, he affirms:“ I am worried about the future of my family, of my children ”.

“The war is endless and the Taliban have threatened us”

The United Nations data are eloquent: 4.2 million children have stopped going to school in Afghanistan, of which 60% are girls. “There is no guarantee of survival in my country,” Nargis says in Spanish, “here the war is endless and the Taliban have threatened us because my father was a colonel in the Defense Ministry. They have already warned us several times, I want go to Spain to guarantee my life and that of my family”.

“Now they’re trying to find us, that’s why we’re in danger“

It is also the target of Ali Aqa, who has already started the journey out of Afghanistan. Ali He is hiding with his wife and son in the home of relatives far from Kabul. He also speaks the Spanish he learned at university. Ali worked for the UN on human and women’s rights programs; and his wife, for the government, specifically for the Department of Health, from which he cared for women in danger, victims of sexist violence.

See also  "He has fainted": Omar Montes gets dizzy in 'Planeta Calleja' and ends up losing consciousness | Television on Cadena SER

Ali tells that has received “many calls from Taliban who were in jail” because they had committed crimes reported by his wife and his department. “Now they are trying to find us, so we are in danger.” Again with UN data, since August, the Taliban have carried out at least 59 arbitrary arrests of activists and journalists and they have killed a dozen.

“The Taliban are looking for all the people who worked with Human Rights and Security,” insists Ali Aqa, “that’s why we need to get out of here and travel to Spain, where we can live without fear.”

Fatima, Faryal, Nargis and Ali Aqa have in common that they speak Spanish and share a teacher. This is Luis Herruzo, a colonel in the reserve who between 2008 and 2013 he was the defense attaché at the Spanish embassy in Kabul. During that time he also taught Spanish at the university in the capital of Afghanistan.

“Sometimes I don’t even know how they hit me, I guess it’s word of mouth“

Herruzo carries a folder with the list of names of dozens of Afghan families who have asked him for help. His story begins on August 20, he says that that day he felt “the knock that there were people who had been working with me in Kabul and they couldn’t take the planes. Many are still there ”. And at risk, because, Herruzo explains, “it seems incredible, but they persecute them because they studied the Spanish language”.

What Colonel Herruzo has done since then is “collect data from families who come asking for my help. Sometimes I don’t even know how they hit me, I guess it’s word of mouth ”. His contact is given, fundamentally, by Facebook. “In my case and although it hurts,” he says, “I only help families who have collaborated with us or, as in the case of graduates in Spanish, have had a special relationship. These lists of people, of which I check their documents, they are the ones that I am sending to the ministry [de Exteriores]”.

Colonel Herruzo acts as a mediator and listens to desperate situations. “They call me and ask me how the evacuation is going. I tell them to be calm, to wait, but after three days they call me again. They are people who are living hell”. For this former military man, at the rate that visas are being given to Afghans who request them it will be “years” before the process is finished: “There is a terrible difficulty in the embassies, where it can take three months to process an asylum request.”

14 hours – More than half of Afghans are at risk of hunger, according to the UN – Listen now

“We must bring them for a matter of honor”

Colonel Herruzo fears that Spain “will leave people with as much right to come as those who left on evacuation flights by the wayside. We must bring them for a matter of honor, of the dignity of the country ”.

According to Colonel Herruzo’s calculations, around 2,000 people They could be waiting in Afghanistan for the papers that allow them to leave the country and reach Spain. The Ministry of Foreign Affairs reduces that figure somewhat, although it acknowledges the slowness of the process. Foreign sources explain to RTVE.es that the Islamabad embassy has already been strengthened and that “they are providing assistance to everyone who requests to leave through personalized and meticulous interviews, trying to guarantee security as much as possible.”

The risk of a possible “call effect” or the arrival of jihadists in Spain would also be among the concerns of the Spanish authorities and the entire European Union.

For the hundreds of people waiting for a response from the Spanish administration, the pace, however, can be infuriating. Colonel Herruzo considers that the important thing is that “the system does not stop and that the words that have been given are fulfilled: you cannot say ‘mission accomplished’ when I still have eighty families waiting.”

“So far a good rescue mission has been done, but a rescue is only accomplished when the last man is brought in or, sometimes, the last corpse ”, he concludes.

The reception process in Spain

Since August 1,909 Afghans have arrived in Spain on evacuation flights organized by the government in August 2021. Four ministries are directly involved in the operation: Foreign, Defense, Interior and Inclusion. Some of them have entered the reception system of international protection.

The Ministry of Inclusion accompanies them throughout the reception process, from the processing of their health card to the schooling of the children. For six months, extendable to nine, they can live in a host apartment. Once asylum is granted, the refugees come to reside in their own home.

They can rent it thanks to financial aid from the Ministry of Inclusion. The total duration of permanence in the international protection reception system is eighteen months, although it can reach two years in case of vulnerability of the people.