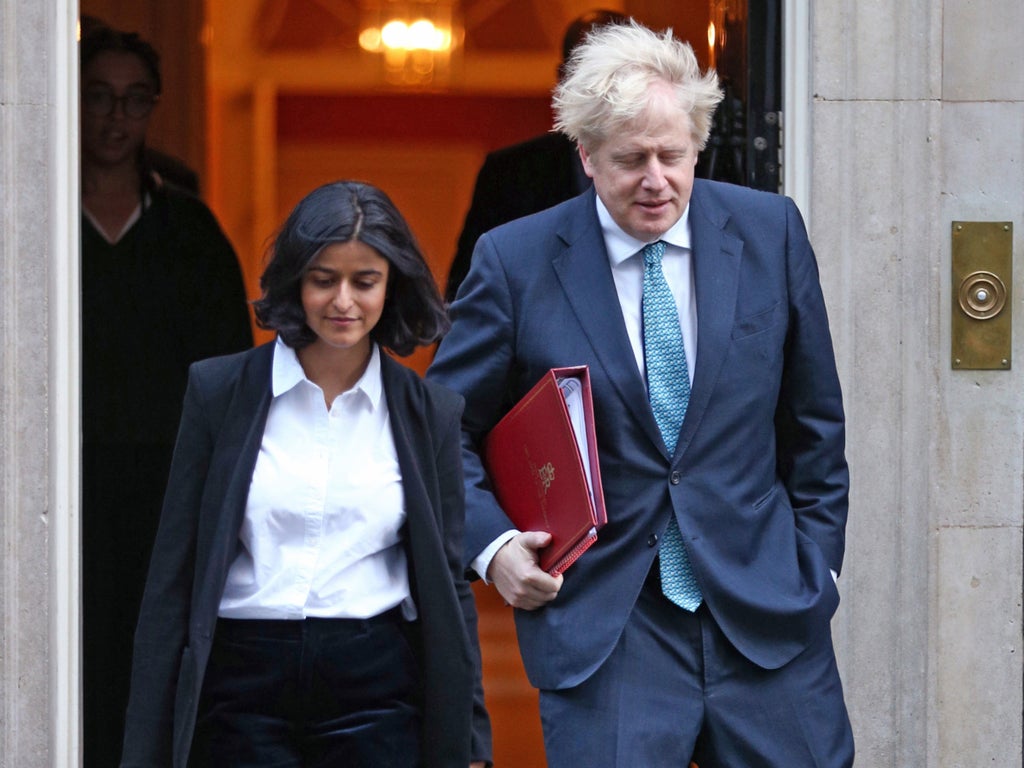 The prime minister’s brain is missing! Well, not exactly, it’s just not in Downing Street any more. Apparently some of those familiar with the medieval court of Baron Boris think that Munira Mirza, the now ex-head of policy, was Johnson’s intellectual valet.

After about 15 years of association with the old monster, on and off, through City Hall to Downing Street, she’s finally had enough. The Jimmy Savile smear on Keir Starmer was too much for her.

It’s difficult to believe that after all she’s put up with, all the stuff about letter boxes, picanninies, bum boys in tank tops, that this admittedly exceptionally offensive quip was the one thing that she found so inhuman she had to leave the building. It’s more, perhaps, a case of this being the straw that finally broke the camel’s back. Anyway, she’s out. So, it seems, is Jack Doyle, the prime minister’s “mouth”. He was probably on his way out anyhow, but it does feel like it’s falling apart.

It’s difficult to exaggerate Mirza’s importance to Johnson. In terms of the significance of her resignation, she’s worth about 30 to 50 obscure deadbeat backbenchers declaring no confidence in Johnson. In terms of influence, she’s more important than most of the cabinet.

In terms of trusted friends in Downing Street, she is the last significant member of “the old band” as he likes to call his long-suffering team carried over from his time as Mayor of London. It’s a bit like when Geoffrey Howe turned on Margaret Thatcher in 1990 – an attack is so much more powerful when delivered by a long-time ally and former friend, rather than a predictable political enemy or rival. It signals the end, as both symptom and cause.

Mirza, by all accounts, represented a calm, rational, commonsensical force for order in a world of almost orgiastic chaos. As well as being Boris ‘brain de él perhaps Mirza also carried the still more onerous-indeed unsustainable-burden of acting as the prime minister’s conscience, missing since he was in his first year at Eton.

That’s certainly the view of Dominic Cummings, another standby generator of ideas and energy makes of her sudden departure: “Moral courage from Munira who has done her best to make progress with a professional team throughout the horror since 11/20. It’s also an unmistakeable signal the bunker is collapsing & *this PM is finished*.

Leaving aside the obvious lack of irony, and the usual agenda about the man who now calls “The Trolley,” Cummings is correct. She, like him, has come to the conclusion that Johnson is now beyond help, not up to the job, and it’s in everyone’s interest that she says so publicly. So, in a more circumspect fashion, she has Rishi Sunak.

In her words: “I believe it was wrong for you to imply this week that Keir Starmer was personally responsible for allowing Jimmy Savile to escape justice. There was no fair or reasonable basis for that assertion. This was not the normal cut-and-thrust of politics; it was an inappropriate and partisan reference to a horrendous case of child sex abuse. You tried to clarify your position today but, despite my urging, you did not apologize for the misleading impression you gave.”

She’s still supportive, and proud of the work they did together, but then she’d have to be, given her long and close association with him: Otherwise her own conscience might be thought to be inactive.

For what it’s worth, Mirza is not some sort of progressive mole trying to moderate the rightists in Downing Street and restrain Johnson (although that was reportedly why David Cameron pointed her in Johnson’s direction back in 2008, when he won the mayoralty).

Put at its bluntest, she is an unrelenting libertarian ideologue who usually told Johnson, perfectly sincerely, what he wanted to hear. Her work de ella on race, in particular, was one long exercise in denying people of color their social justice. She believes that “multiculturalism” “racialises” social problems, largely explainable in other ways, and there’s no such thing as institutional racism.

She basically takes the view, just as Johnson does, that Britain is, with a few yobbish lapses, a post-racist society; one where, even if you were a poor Muslim girl from Oldham, if you worked hard, passed your exams and grasped your opportunities you could indeed end up in Downing Street as the prime minister’s all-purpose brain and conscience.

He had a lot to thank the woman he liked to call “Dr Mirza” for. She was his gaslighter-in-chief on race. Yet on the one occasion she asked him to say sorry for something about her, he would not listen to her, apparently to the point of watching her resign over it. For those who think him loyal to his friends it is an appalling reflection of his selfish, stubborn, nasty personality. He’s really not as cuddly as he makes out, and he relies on his own judgment of him. He must be getting lonely, though.

See also  War May Hit Net Zero Where it Hurts

Partygate: What time will the Sue Gray report be published and what could it mean for Boris Johnson?