Skip to content
Home News The obsession of Robert Caro, the world’s most perfectionist reporter | Culture 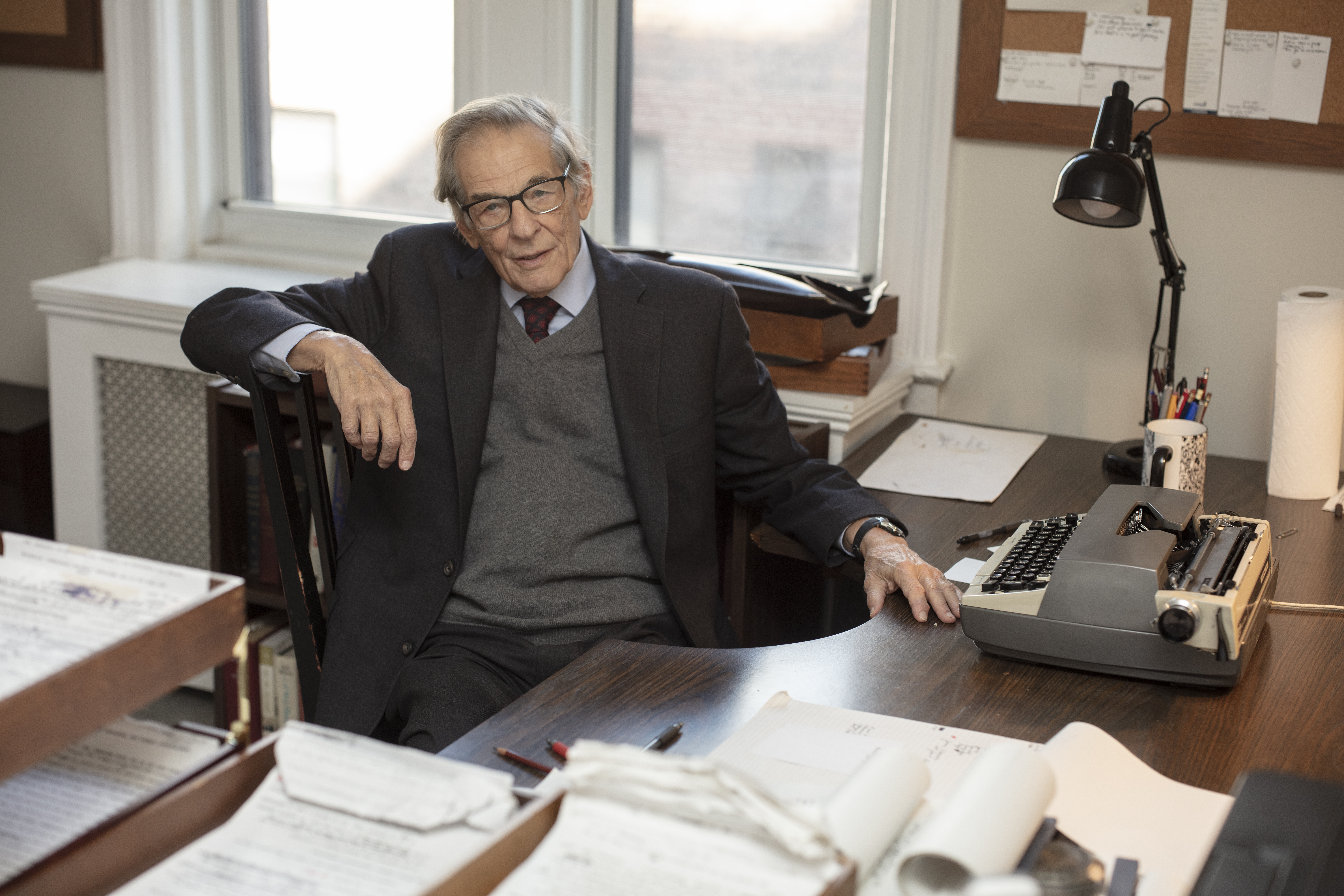 Robert Caro’s office in New York, bright and spartan, swallows the visitor like a trip back in time. It has few pieces of furniture, all old-fashioned, and Cold War ministry-looking filing cabinets with documents from the same period. The work table is full of manuscripts and classic letterpress papers, like the ones that line the walls. It is unclear whether Caro, a journalist in a daily suit, sweater and tie, writes a book or investigates a crime. In the center of the office rests, in what already seems a coquettish anachronism, a Smith Corona Electra 210, an electric typewriter that was discontinued decades ago.

“Really, Mr. Caro, why are you still using a typewriter?”

“To force me to go slow.” I am a too fast writer. A teacher [R. P. Blackmour] He told me at Princeton that I would never get what I want because I think with my fingers. When I was in the newspaper, I wrote everything at the last minute, so when I started my first book I decided to slow down. First I write by hand and then I use the machine.

To understand the dimension of Robert Caro (New York, 86 years old) in the history of journalism in the United States, it helps to know that his notebooks, his drafts and his files have become museum material. The New York Historical Society acquired them in early 2021 and since October they are part of its permanent exhibition. He has won two Pulitzer Prizes, the National Humanities Medal, and virtually every literary honor in the country.

The epic with which he understands the job has cemented his legend: to investigate the childhood of President Lyndon B. Johnson, for example, he moved to his hometown of Texas for three years. An investigative reporter in his early days, he carried the creed of contrasting to the extreme of denying the death of a man, who had been declared deceased in several books. And the guy, named Luis Salas, who had helped Johnson steal a Texas Senate election in 1948 and fled to Mexico, ended up finding him in a trailer home, back in Texas. He knocked on his door decades after the fraud, and he admitted it all. “Finding that took a year of my life,” says the journalist.

Johnson’s great biography (The years of Lyndon Johnson, four volumes published since 1982 and the fifth and last in process), along with that of the urban planner Robert Moses, shadowy founder of modern New York (The Power Broker, 1974), have turned Caro into a myth. Because his books not only portray characters, they constitute explorations of political power and, above all, of the effect “of power on the not powerful”, his main goal. It is what has made those works, all of biblical proportions, colossal chronicles of the American twentieth century. His books have not yet been translated in Spain.

In the case of Moses, he was especially interested in telling how an unelected man at the polls had achieved such levels of power, how he used them, and what effect he had on the people. For example, it eliminated up to 21 poor neighborhoods in the city to build highways. “Made 627 miles of them [1.009 kilómetros] And I decided to tell the story of a mile, one that passed through the Bronx. He wanted to narrate what had happened to the people who had to leave there. For that I had to find them and, of course, it was not easy, then there were no computers. Neither is a national phone book. The book was not going to take me four years, it was going to take me five or six… ”.

The advance the publisher gave him vanished long before, he went bankrupt, had to sell his house and move with his wife, Ina, to an apartment in the Bronx. Born and raised in Upperwest New York in 1935, he graduated from Princeton and worked as an investigative reporter for a newspaper called Newsday, where he learned from his editor the first rule of a hound: “Read every page, read every damn page, take nothing for granted,” he exhorted. In 1966, while enjoying the renowned Nieman Journalism Fellowship at Harvard, he discovered the depth of Moses’ character and that desire to go beyond newspaper articles and eventually become the biographer of America was born.

In full boom of the new journalism and its pyrotechnics, Caro took a different route, but no less careful in style. The narrative taste is another of his obsessions, key in the awards obtained in the lyrics. “The quality of writing matters in both non-fiction and fiction, pacing is very important. If you want to get something read about how power works, that you think people need to care about, you need to write it in an interesting way ”.

“Summary of a source: in 1944 only one big newspaper supported him. But is that true? What about Amon Carter? “

Annotations like these are part of his archive and can be seen in the cabinets of the New York Historical Society. Caro wrote the words “shut up” or the initials in capital letters of this expression in English (SU) to remind herself not to interrupt the interviewee’s silences after a difficult question. Look them in the eye and hold on. The only cassette tape in the sample (Caro does not record the interviews) is from his wife, Ina, the only researcher he has ever trusted, and the secret weapon to win over the women of the most rural Texas and be able to tell the harshness of their lives, what it meant to them comes from running water.

Again, it was about recounting the effect of power on the powerless and the era of Johnson, the president who brought public health coverage for the elderly and disadvantaged, who promoted the voting rights law, offers an extraordinary story. He was also a womanizer capable of stealing an election and escalating the Vietnam War to levels that already looked catastrophic. What feeling do you have after studying the character for so long?

“Mixed, in the same months of 1965 in which it is carrying out the health programs, it is ordering bombings in villages where it believed that there were guerrillas, but they were innocent people. Sometimes you can’t help but admire him, he had a special political genius. Yesterday he was writing a passage in which he and his aide, Bill Moyers, discuss how to get Congress to pass an increase in Social Security benefits. Moyers says they will argue that it will have a good effect on the economy. And Johnson responds more or less this: no, we are going to tell them that we are going to give that money to Grandma because we owe it to her, because we promised her a decent life. And tell the senators that one day their grandchildren will ask them what they voted for when Medicare was approved and they will be proud to say yes. “

To Johnson he owes a moment that he will never forget, the first time in his life that he was not able to look into the eyes of an interviewee, the president’s wife, Lady Bird Johnson, when she had to ask him about the most important of lovers of her husband, Alice Glass, the only one Caro writes about, as she is the only one who had a political influence. “She herself, who knew that the journalist, I, had seen her, began to talk to me about her and I was very ashamed, I did not lift my face from the notebook.” Books also allow us to pry into the contradictions of the human soul, into the weaknesses, like that narcissism of Robert Moses when, espoused of power, he suffers for not going down in history as someone admired.

Caro spends an average of 10 years on each of her books. This is more or less what he is wearing now in this last piece of The Lyndon Years of Johnson. Are you obsessed with perfection? “I don’t know what it is, but I can’t help it,” he says. “Simply, if I think something should be in a book, I need to put it.”

There is not a trace of petulance in him, the tone of a hero or a martyr of the trade. He talks about his career without exception (“You are a journalist, you know how this is going …”, he often says). He does not act as a saint, nor is he pessimistic about journalism: “I think very good things are done. The information from the Trump presidency was great, it gave us an almost instantaneous account of what was happening in the White House, better than what we have had in a contemporary presidency. ” Nor does he seem capable of giving advice: “When I look back on my life, I think: you have to be a little crazy for this.”

He’s been looking back a lot lately. The exhibition has led him to it. Among the papers was a story that he wrote in sixth grade (12-year-old children), it was, of course, a biography and was titled: The Moose Honk Story. He lost his mother very young, when he was 11, to cancer and his aunt Bea would pick him and his sister up on many Saturdays to take them to the neighborhood museums, the Natural History Museum, or the New York Historical Society, which now houses his job. That, and the fact that the exhibition is permanent influenced in choosing to sell his materials to this institution. “We all want things that last.”

Soon after, Caro patiently poses for photographs. He picks up the cups of coffee he has prepared and says goodbye on the doorstep of the office before returning to the pending book. He’s lucky, he says, to have an editor who never asks him when he’s going to deliver it.

-But you’re not going to ask me that …