The nine Catalan independence prisoners Condemned for sedition and embezzlement in the ‘procés’ have been released from jail this Wednesday after approving, yesterday, the pardons in the Council of Ministers.

Once the Official State Gazette (BOE) has published the pardon and the Supreme Court has ordered his release, this noon they left the Barcelona penitentiary in Lledoners former vice-president Oriol Junqueras, ex-ministers Jordi Turull, Raül Romeva, Joaquim Forn and Josep Rull and former ANC leaders Jordi Sànchez and Òmnium Cultural, Jordi Cuixart. On their departure they have carried a banner with the slogan Freedom for Catalonia (Freedom for Catalonia) and a pro-independence flag.

The first of the procés prisoners to leave prison, at 12 noon, was the former president of the Parliament Carme Forcadell, who was serving a sentence in the women’s prison in Wad Ras, in Barcelona. For her part, former councilwoman Dolors Bassa has left the prison in Puig de les Basses, in Figueres (Girona), at 12:15 pm.

Upon their departure from Lledoners, the seven prisoners have been received by relatives, by the president of the Generalitat, Pere Aragonès, and by various councilors of the Government and leaders of the pro-independence parties and entities.

The president of Òmnium Cultural, Jordi Cuixart, was the first to speak, and in his speech he recalled Carles Puigdemont, Marta Rovira, Antoni Comín, Clara Ponsatí and Anna Gabriel, the “exiles” of the “procés”.

Cuixart has warned that the Catalans are no longer “afraid” and has stressed that “today is not a day of resignation”: “The repression has not defeated us and will not defeat us. They have not silenced us and we will never be silent,” he said. assured the president of Òmnium, convinced that the State has granted them a pardon due to “pressure from Europe and the Catalans.”

Junqueras, for his part, has indicated that “today nothing is finished” and that they will continue with the commitment, effort and work for the freedom of all people. “The jail does not bend us, but it reinforces our convictions”, has assured the president of ERC.

The former president of the ANC and current general secretary of JxCat, Jordi Sànchez, has indicated that “today is a great day” because the prisoners leave “all together, worthy, united, standing.” In addition, he has warned that they will not accept “any silence in exchange for any pardon”,

Joaquim Forn has insisted that the prisoners leave with unshakable convictions: “We continue to think exactly the same, we are stronger than ever,” said the former minister, who has promised to continue fighting for independence and against all forms of repression.

Next, Josep Rull He has indicated that they will continue to fight to achieve the independence of Catalonia and has added that those who must ask for forgiveness are those who beat people on October 1, 2017.

Jordi Turull has denounced that “in Europe there is still a ‘Guantánamo’ of justice called the Supreme Court and the National Court” and the former minister Raül Romeva has remarked that the prisoners leave to continue working for freedom, amnesty, self-determination and the republic. “If they believe that locking us up in jails will end our desire, it is because they have mistaken the town and the time,” he added.

See also  The endless story of the Parthenon statues: Boris Johnson will not return them to Greece either | Culture

Finally, the seven prisoners of the ‘procés’ pardoned have sung ‘The laborers’. 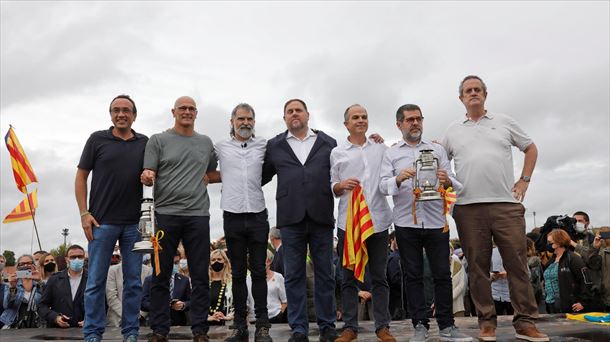 Forcadell celebrates the pardon as a “small victory”

A Carme Forcadell It was received at Wad Ras by his successors in the presidency of the Parliament, Roger Torrent and Laura Borràs, as well as the Minister of the Interior, Joan Ignasi Elena, and the Minister of Economy, Jaume Giró, among others.

The former president of the Parliament has celebrated that she has been granted the pardon as “a small victory to get the big victory“which, for her, is amnesty, self-determination and the Catalan republic.

In statements to the media outside the Forcadell prison, he stated that the challenge now is to achieve “the end of repression and that they can return to exiles. “He also thanked the support received during the time he has been in jail.

Dolors Bassa: “Nothing is over”

The ex-minister Dolors Bassa has claimed the freedom and self-determination of Catalonia when leaving the prison of Puig de les Basses, but has assured that “nothing has finished”.

Basaa believes that they are “in an obstacle course, because this is a first step, that of pardons, which opens the door to do things in politics and not to prosecute,” and he recalled that there are still open court cases related to the process. sovereignist, who has branded ignominy.

Bassa has cited the verses by Miquel Martí i Pol We are where we are, because everything is to be done and everything is possible, the same poem that the President of the Government, Pedro Sánchez, used to begin his lecture on Monday at the Liceo Theater.

The Government approved this Tuesday a partial pardon for the nine prisoners of the procés, to whom it has commuted the sentences of between nine and thirteen years in prison imposed on them by the Supreme Court for sedition and embezzlement, although it maintains their disqualification from public office and conditions their release on the fact that they do not commit other serious crimes in a period of between three to six years.

The decrees approved suppose the total extinction of penalties The nine convicted of sedition and embezzlement still have to serve, although the disqualification penalties that were imposed by the Supreme Court remain intact, since they have been pardoned for penalties, not for crimes.