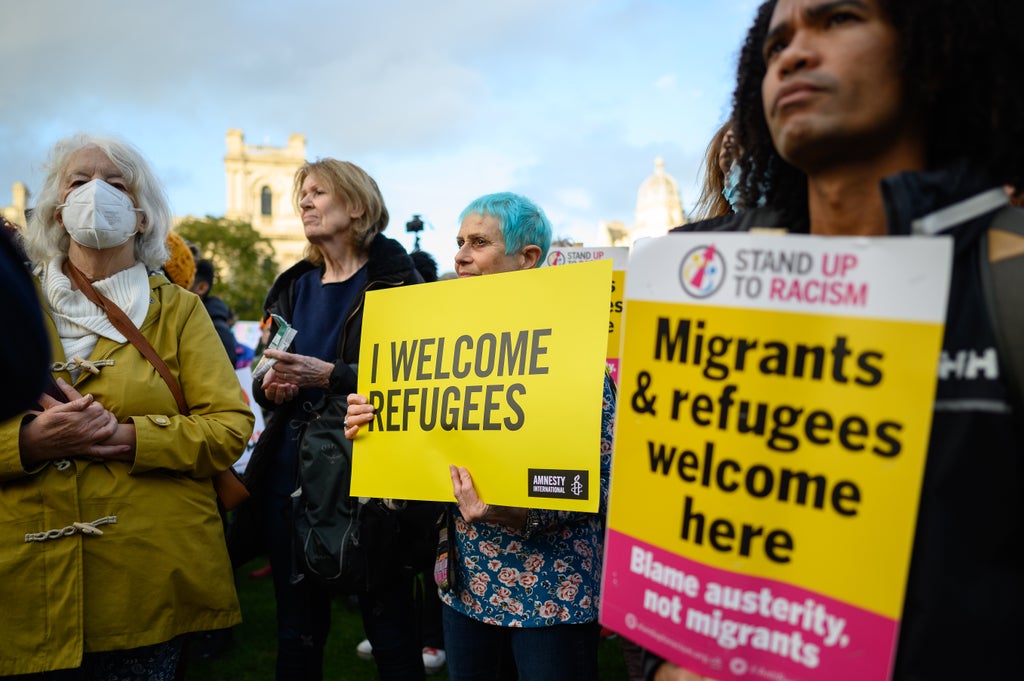 The government’s Nationality and Borders Bill represents one of the biggest attacks on the rights of refugees, migrants, and people of color in recent memory. As ever, the worst effects of the legislation will be felt by the most vulnerable – especially LGBT+ people seeking sanctuary in the UK.

The situation was already dire for this group of people. Despite being put through inhumane “tests” to prove their sexual orientation or gender identity, LGBT+ asylum seekers routinely see their claims rejected because of a widespread “culture of disbelief” and an “impossible burden of proof”.

The Home Office gets it wrong so often that almost half of LGBT+ asylum claim refusals are successfully challenged on appeal. In many cases, this hostile culture is a matter of life and death – homosexuality remains illegal in an estimated 70 countries, 11 of which carry the potential for the death penalty.

Instead of addressing the homophobia, biphobia and transphobia embedded in our immigration system, the government is doubling down on their failures, making it even more likely that LGBTQ+ people will be sent back to face violence, abuse, or even death.

Under current UK law, to be granted asylum a person must demonstrate that there is a “reasonable degree of likelihood” of persecution if they were forced to return to their country of origin. It is inherently difficult for LGBT+ asylum seekers to provide their sexual orientation or gender identity – they’ve often spent their entire lives trying to conceal it. Consequently, for many LGBT+ people their only evidence is their own verbal testimony. The risks from reaching out to friends at home, or previous partners, for corroborating stories can be too great.

Far from correcting this fatal Catch-22, the Nationality and Borders Bill will increase the burden of proof required to a higher “balance of probabilities’, making the already difficult even harder. On top of this, new measures will reduce the time to provide evidence for a claim, with any produced after the new deadline given less weight. The bill will also shorten the time frame in which people can apply for asylum, penalizing those who delay their claims.

For thousands, these new laws could be the difference between a successful claim or not. As Rainbow Migration points out, many people do not realize they’re LGBT+ until they’ve lived here for some time, do not immediately know they are eligible for refugee protection, or they may simply be overcoming trauma and unable to immediately disclose intimate details of their lives to complete strangers.

And there’s a good chance new measures in the bill will further discourage that. Being openly LGBT+ in the UK asylum system is already unsafe. It is a bitter and cruel irony that we incarcerate people who, in their country of origin, face prison sentences for their identity and sexuality. LGBT+ people already face disproportionate levels of abuse in asylum centres. Government proposals to expand the detention of those making asylum claims will only make that worse.

The same goes for new rules on so-called “Group 1” and “Group 2” refugees. The division – which the UN says undermines the 1951 Refugee Convention – will grant a lesser, temporary status to some asylum seekers, forcing them to attend regular assessments. Not only will this put people under immense stress and anxiety, but it could also force LGBT+ refugees to continue to hide their identity for fear that living openly in the UK increases their risk of persecution if they are sent back.

The government can’t feign ignorance of these issues. Their own equality impact assessment of the bill admitted it risked “indirectly disadvantage[ing] protected groups” including LGBT+ people, and six days after it was published, I questioned ministers specifically on the new burden of proof requirements in the legislation. Rainbow Migration – an organization fighting for LGBTQI+ people in the UK immigration system – have been sounding the alarm, sharing testimonies of the many LGBT+ people who would have had their claims rejected under these new laws.

Rather than re-traumatizing LGBT+ people fleeing violence and abuse, we need an asylum system that supports them – and all people fleeing from persecution, war, and the worst effects of the climate emergency. That’s why on Wednesday I’ll be holding a debate in parliament to put this issue firmly on the agenda. I’m inviting every MP, from every party, to participate. Together, I hope we can shine an urgent light on this dangerous attack on the global LGBT+ community – and organize to prevent it.

Olivia Blake is the Labor MP for Sheffield Hallam