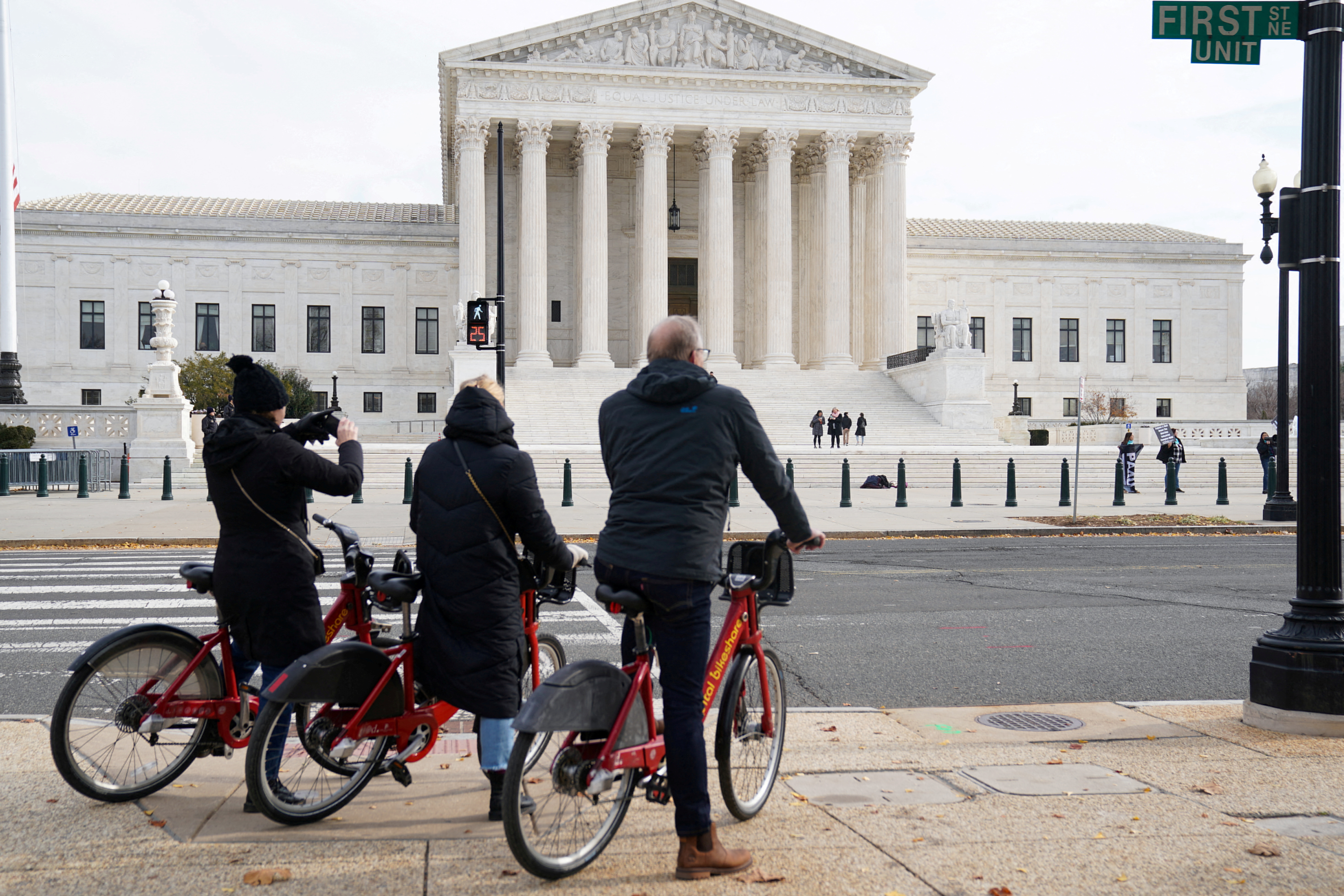 Racial segregation in public schools in the United States ended in 1954 thanks to the struggle of a black girl named Linda Brown who was not allowed to enroll in a white school in Topeka (Kansas) and managed to take the case to the Supreme Court, who agreed with him and ended this practice. People of the same sex can marry throughout the country because in 2015 that same body, the country’s highest judicial authority, considered that denying them violated the Constitution.

The Supreme Court, a body of nine judges for life, has shaped American society throughout history from these and other momentous decisions. In 1970, a Dallas woman under the pseudonym Jane Roe reported to the city’s district attorney, Henry Wade, to claim her right to abort, and the case reached the highest judicial authority. The Roe v. Wade ruling of 1973 made abortion a constitutional right for women throughout the country, establishing one of those changes in step that are believed to be irreversible.

But in 2021, almost half a century later, the highest judicial authority is considering repealing this crucial precedent thanks to a new conservative supermajority of judges that has not been seen since the 1930s. The lawsuit over the current restrictive Mississippi law, which has originated this The new deliberation on the reproductive freedom of women is a sample of the social impact that the Supreme Court can cause in coming decades, a solid proof that no progress in the field of civil rights is shielded.

The highest judicial authority is formed, today, by six conservative judges (three of them, especially heeled to the right, nominated in recent years by President Donald Trump) and three progressives. The lifelong nature of the mandates reinforces their independence from the politician who has proposed them, as evidenced by the slam of the door that they gave to the attempt to reverse Trump’s electoral results a year ago or their last accolade, this summer, to Obama’s health reform. Rather, the conflict lies in their independence from themselves, that is, their ideology and their religious beliefs, in decision-making.

Michael Klarman, Professor of Legal History at Harvard, is one of the speakers of the Supreme Reform Committee that has activated the Administration of Democrat Joe Biden. In his opinion, judges “are a threat to American society”, not only because of their position on abortion but also because of “other issues that directly impact democracy, such as voting rights laws or the redefinition of electoral districts. at the convenience of the political party on duty [práctica conocida como gerrymandering]”, among others. “The judges always argue that they are neutral referees and not political hammers, but of course they are influenced by their religious views and life experiences,” he adds. Revoke fully or partially Roe, he notes, “will reveal the success of a decades-long campaign to fill the rostrum with conservative judges.”

The last turn to the right of the Supreme was forged in a span of four years. Upon the passing of Conservative Justice Antonin Scalia in February 2016, Democratic President Barack Obama tried to win the approval of a moderate progressive, Merrick Garland (now US Attorney General), but Republicans blocked the Upper House nomination and avoided its replacement. As soon as Donald Trump came to power in 2017, he appointed the conservative Neil Gorsuch and maintained a conservative majority of 5 to 4 justices. A year later, Anthony Kennedy, a conservative but moderate judge, retired, whose vote was key, for example, in the approval of equal marriage. The Republican president succeeded him by Brett Kavanaugh, with a record far to the right (and peppered with allegations of sexual abuse during his youth).

Finally, the death of a feminist and progressive icon like Judge Ruth Bader Ginsburg in September 2020 served to give the last turn of the screw: her place is now occupied by Amy Coney Barrett, a fervent Catholic, defender of the literal reading of the Constitution. and very, very young in this field. At 49, a long career awaits him in the highest judicial body.

The appointment of Supreme Court judges constitutes, therefore, one of the great exercises of presidential power and the mishaps over their health – many of them are elderly – are covered as political news of great importance. There are those who do not forgive that Ginsburg did not retire during the Obama Administration, when he was already in his eighties, to guarantee a progressive replacement. And all eyes have already begun to turn to Stephen Breyer, an 83-year-old progressive who may be relieved by a Democrat elected by Biden if he retires now. Currently on the conservative flank are the aforementioned Gorsuch (54 years), Kavanaugh (56) and Barrett (49 years), in addition to veterans Clarence Thomas (73), Samuel Alito (71) and John Roberts (66), who presides the court. Among the progressives, along with Breyer are Elena Kagan (61) and Sonia Sotomayor (67).

The fights over appointments have increased over the years, in the heat of political tension, and trust in the Supreme Court as an institution has been eroded by these partisan struggles. A Gallup poll last September showed that only 40% of the population approved of the work of the highest court, the worst figure since this consultation began in 2000. In another recent poll by Quinnipiac University, 61 % of Americans saw decisions peppered with politics, when three years ago only 50% said so.

The magistrates nominated by Republican presidents – who must then be confirmed in the Senate – are, in fact, a majority for at least half a century, but the turn to the right that the court has taken has not only to do with the numerical imbalance (6 a 3) but with the ideological profile of the elect. Many progressives defend the need to reform the court and expand the number of magistrates, but the project has little travel given the frontal rejection of the Republicans.

Professor of Constitutional Law Lee Epstein, a researcher on the behavior of magistrates and an expert in the Supreme Court, points out: “I think we have seen two Courts in action, one, with a Republican majority, like the one that has been ruling since the 70s, in the that the conservative judges could vote together with the progressives, and another one like the one now, more heeled to the right and that can be very belligerent in social matters ”.

The annulment of Roe would mean leaving the decision of whether or not to allow abortion in the hands of each territory, which would therefore cease to be considered a constitutional right of women. Oral presentation of the arguments, which took place earlier this month in Washington, indicated that conservative judges seem inclined to agree with Mississippi and its restrictive law. They have until the end of the judicial year, in June, to announce their decision. Epstein warns that if they decide to reverse that right, “it will be like dropping a bomb, it will be very controversial.”