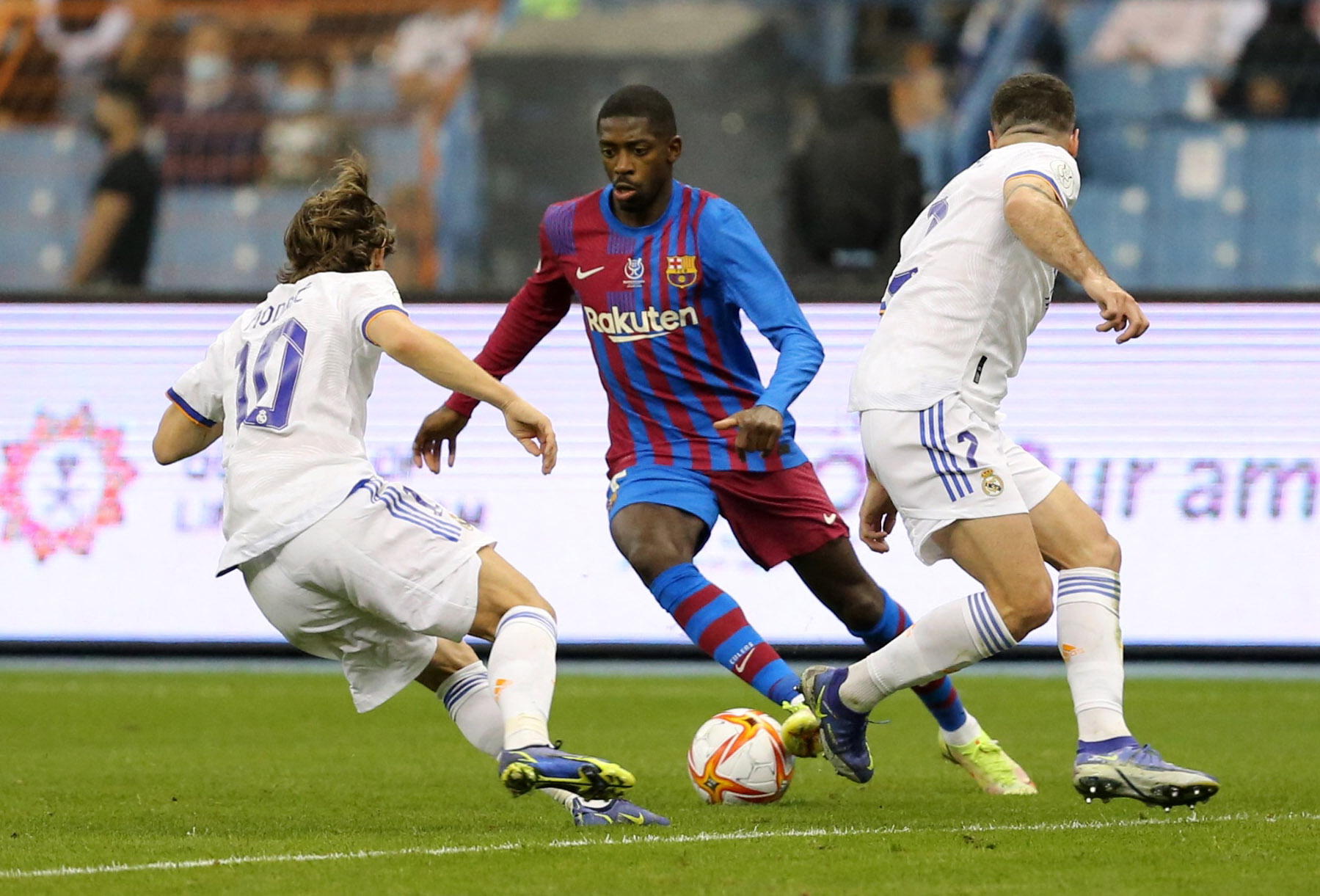 Xavi Hernández, coach of Barcelona, ​​does not give up the signing of Álvaro Morata despite Massimiliano Allegri’s dissuasive message. The Juventus coach reiterated that he will not let the Spanish international attacker leave no matter how hard Barça insists. The Italian coach demands a striker in exchange to be able to negotiate on the striker who acts in Turin on loan from Atlético. And the rojiblanco club has a purchase option on Antoine Griezmann after the Frenchman left the Camp Nou. The open negotiations are multiple and there are so many options that unsuspected operations cannot be ruled out until the winter market closes on the 31st. The point is that Xavi aspires to incorporate a battering ram without knowing very well what will become of Luuk de Jong. nor what will happen with Ousmane Dembélé. The dance of strikers is unstoppable at Barça.

The statistics ensure that since the beginning of the season up to 16 footballers have paraded through the attacking front of Barcelona. The latest was Ferran Torres, incorporated from Manchester City, debutant in the semifinal of the Spanish Super Cup played in Riyadh against Madrid, while the Barcelona striker who formed against Real Sociedad on the first day of the League, on August 15 of 2021, was formed by Griezmann, Memphis Depay and Martin Braithwaite. The Frenchman returned to Atlético on August 31, the Dane was injured in September and will probably not be back on the pitch until next week and the Dutchman has been injured a month after leading Barcelona’s top scorers table (8). Memphis is no longer essential, but his name has even been considered as a possible bargaining chip in the Morata operation.

The Dutch international center forward was hired in the summer after his contract with Olympique de Lyon ended and he was endorsed by then coach Ronald Koeman. The Dutch coach also requested a replacement for Griezmann after successively losing Luis Suárez and Leo Messi. The chosen one was Luuk de Jong, a 9 on loan from Sevilla and who was about to end up at Cádiz, hated by the Camp Nou and recently redeemed in Mallorca and Granada. Xavi tries to stabilize a team subjected to constant changes after replacing Koeman and being chosen as the leader of the sports project of president Joan Laporta. The Barcelona rector admitted in Riyadh that there are no longer any doubts about the chosen path and he is trying to attend to a coach who would like to have Ferran Torres, Ansu Fati, Morata and also Dembélé.

The future of the French winger is unknown because his wishes to stay, respond to the coach’s expectations and renew do not correspond to the aspirations of his representative, who aspires to improve his contract while speculating with various offers once the player’s contract ends. on June 30 and no one rules out that an agreement may not have already been reached with a club, preferably the Premier. Dembélé’s indecision is particularly contrary to the club because it conditions its sports and economic policy due to the financial fair play of the League. The wage bill would have been fluffy if the footballer had signed his continuity and there would be less doubt about a list of forwards that has included Memphis, Luuk de Jong, Dembélé, Ferran Torres, Ansu Fati, Griezmann, Braithwaite, Ferran Jutglà, Abde Ezzalzouli, Ilias Akhomach, Kun Aguëro and Demir Yusuf.

The list may also include Rei Manaj, a substitute on loan to Spezia, or Estanis Pedrola, who made his debut in the Linares Cup match. There have also been midfielders who have occupied attacking positions in times of need, such as Sergiño Dest, Phillipe Coutinho and even Gavi and Frenkie de Jong. The relationship has waned after Griezmann’s departure, Aguero’s retirement with a heart condition and Demir’s return to Rapid Vienna. It remains to be seen if, on the other hand, it will increase with a striker, be it Morata or one of the alternatives that are being considered such as Edson Cavani and Anthony Martial, from (Manchester United), or Lucas Boyé (Elche).

Many forwards in a squad that has used up to 35 players, and few goals: 37 in 28 official games: 31 in the League and two in each of the three remaining competitions: Champions, Cup and Super Cup. No competition better expresses Barça’s precariousness and its sporting policy, conditioned by economic hardship, than the European Cup: it has had three coaches —Koeman, Sergi Barjuán and Xavi— and has only been able to score two goals, both against Dynamo Kiev , one marked by Gerard Piqué and the second by Ansu Fati in Ukraine. Fati totals five goals to eight from Memphis and four from Luuk de Jong. The figures contrast with those of last season, when Messi and Griezmann alone totaled 58 goals —30 for the Argentine to 20 for the French—, and with those of the trident formed by Luis Suárez-Messi and Neymar. The three strikers added 122, 130 and 111 goals in the three seasons that coincided at the Camp Nou.

Accustomed to Messi, Barcelona have not yet found a reliable forward, especially due to Ansu Fati’s injury and also due to Dembélé’s irregularity. Ansu reappeared with a goal against Madrid, a match in which Ferran Torres made his debut, who went unnoticed, out of shape after suffering a fracture in his right foot in the match against Italy corresponding to the League of Nations. Both are headliners in a pending attack front now for Dembélé and Morata, who hope that Barça finds the formula for Juve to release him and he can arrive at the Camp Nou as Xavi wants.

Chastened by a disastrous transfer policy that has led to its ruin, Barcelona has had no choice but to bet on some young footballers who in some cases have achieved ownership without hardly going through Barça B. The most striking are now himself Nico, Gavi and Araujo. The Barça board has already started negotiations with the three to try to ensure their continuity at the Camp Nou.

Nico (20 years old) has a record of the subsidiary; Gavi (17), already a Spanish international with Luis Enrique, is still a youth; and Araujo’s agreement (22) ends in 2023. Although the board hopes to be able to renew the three soon, it needs to lower the wage bill, a circumstance that happens by transferring or giving up any of the players that the coach does not have or review other contracts, as happened with Umtiti, operated yesterday for a fracture in the fifth metatarsal of his right foot. The same case can occur with Sergi Roberto. The midfielder, one of the team’s captains, is recovering from an injury and seems willing to update an agreement that expires on June 30. The conversations, however, have been delayed and there has not always been good harmony between the parties after the footballer already lowered the record in the summer of 2021.

The Barcelona board hopes that there will be no problems with Nico or Gavi. Although Araujo’s situation is not the same, claimed by some clubs, expectations are also optimistic, especially due to the Uruguayan’s wish, essential in the defense provided by Xavi. The coach has consulted in any case the possibility of signing a side while not ruling out the option of doing without Dest.

Araujo, Gavi and Nico aspire to follow the line set by Barcelona with Pedri and Ansu Fati, both 19 years old. Pedri renewed his contract until 2026 and Ansu Fati until 2027. Ansu also inherited Messi’s number 10 and is one of the club’s icons, after overcoming the injury he suffered in November 2020 in a match against Betis.