Havana woke up on Monday taken by police officers and State Security agents on the day that the Archipelago platform had called an opposition protest to demand changes and more freedom on the island. Since that group announced the date of the demonstration called the Civic March for Change, the island’s government declared it illegal and a “destabilizing provocation”.

Faced with the Government’s response to the call, one of the main promoters of the protest, the playwright Yunior García, said last week that he would march alone this Sunday “on behalf of all the citizens who have been deprived of their right by the regime. to demonstrate ”, but his house woke up that day under siege, like those of other opposition leaders and journalists. Many others were arrested when they left their homes to demonstrate.

For weeks, the date of November 15, already known as November 15, has been widely discussed on social networks and in Cuban homes: for dissidents it is an opportunity to march in the streets of Cuba four months after the historic and spontaneous July 11 demonstrations. During these mobilizations, which left one dead and dozens injured, 1,270 people were arrested and 658 are still in prison, according to the human rights NGO Cubalex.

Russia has denounced the interference of the United States in the internal affairs of Cuba. In a statement from the Ministry of Foreign Affairs, Russia has indicated that “senior US officials and their representatives in Havana” have been encouraging, through their statements, to reverse the constitutional order in Cuba, reports Europa Press.

“Those who plan provocations against Cuba should not forget the rejection by the international community of the US blockade imposed more than six decades ago,” says the text. Moscow emphasizes that “within the framework of the close and friendly relationship” it maintains with Cuba, it will continue to provide the island with “all kinds of assistance.”

The arrests on the island continue

Reports continue of detentions of opponents leaving their homes this Monday, the day the March for Change was called in several cities in Cuba.

Among the detainees is Manuel Cuesta Morua, vice president of the opposition group Council for Democratic Transition, who, according to his wife Nairobi Scheri reported to the AFP agency, was detained by the State security forces at around 1 in the afternoon local time by State Security agents when he was leaving his house. The leader of the Ladies of Blanco Berta Soler and her husband Ángel Moya, as reported by Martha Beatriz Roque.

In the Telegram group of the Archipelago platform, promoter of the march, they have also denounced the arrest of the art historian, curator and activist Carolina Barrero, who also has Spanish citizenship. The group demanded their release and the harassment of those who exercise their right to demonstrate. 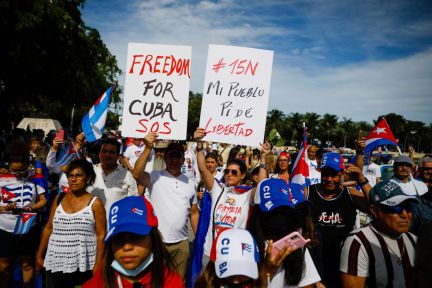 The images of the day

With the main opposition leaders and journalists besieged in their homes, the images of what is happening in Cuba are trickling down. In this photo gallery you can see the scenes of the empty streets of Havana with police vans and those of the protests with which the supporters of President Miguel Díaz Canel are trying to counter the call for the March for Change made by the critics of his government.

The protests in other provinces were called at 3:00 in the afternoon local time. In addition, in other cities around the world, Cuban exiles have been taking to the streets since Sunday to support the demand for greater freedoms of their compatriots on the island.

In the image, scene of a protest in Miami this Sunday. 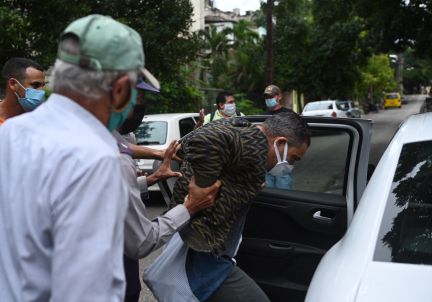 A protester is arrested in El Quijote park in Havana

The images about what has happened in the last hours in Havana are beginning to be known. In the AFP photo, a protester is arrested on Sunday afternoon.

Authorities accuse the organizers of being agents trained and financed by the United States to provoke regime change. For this reason they banned the demonstration and threatened them with criminal sanctions. In recent days, several dissidents, promoters of the demonstration and independent journalists have denounced on social media that they have been blocked from their homes by state security agents.

The playwright Yunior García “is fine.” This was reported by the journalist from the EFE Atahualpa Amerise agency on his Twitter account. “He is at home sleeping. We knocked on his door and his mother-in-law told us that he is exhausted after the intense Sunday. The agents who are watching him did not prevent our team from accessing. The national flag continues to block his views,” he wrote.

García is one of the leaders of the Archipelago, the platform created after the protests last July and which called the march for change for this Monday. Last week, the playwright issued a statement denouncing government pressure and announcing that, in order to prevent the protesters from being repressed, he had decided march alone in Havana on Sunday. But his house woke up yesterday besieged by State Security agents, who remain outside his home, as well as those of other opposition leaders and journalists.

The initial idea of ​​the 15-N march was modified by the organizers to avoid incidents or acts of repression. From the Archipelago platform, which promotes the protest, those who want to join have been asked to wear white and take to the streets without following a specific route. This, given the announcement of the Cuban Government to carry out activities on the main roads on the occasion of the celebration of the school restart and the opening of international tourism, after more than a year of pandemic.

“Today we send a message to the people of Cuba: if you are in the streets, so are we”

15-N, the march that the Cuban opposition has been waiting for since last July

The demonstrations last July in Cuba, motivated by food shortages and the humanitarian crisis, ended with more than 500 people arrested and the violation of human rights of at least 130 people. According to an investigation by Human Rights Watch, the abuses against the protesters followed a deliberate plan whose sole purpose was to silence the protesters in any way. Despite the repression, the call to return to the streets emerged days later, on August 9, and since then the march has had to change its strategy in its attempt not to be silenced.

The 15-N demonstration was originally scheduled to begin in Havana at three in the afternoon from the Malecón to Central Park. It is uncertain, however, what will happen this Monday because since Sunday several opposition leaders and journalists have been besieged by police officers who have prevented them from leaving their homes. 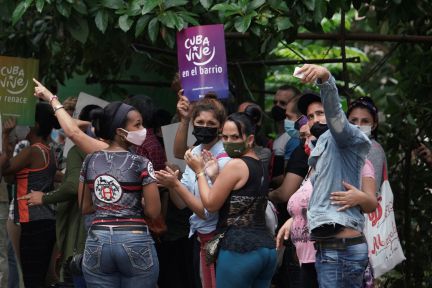 The keys to the march for change in Cuba

The correspondent for EL PAÍS in Cuba, Mauricio Vicent, reviews the background and what this Monday’s march means for Cuba.

The day was convened on August 9 in demand of the “end of violence, the release of all political prisoners [fundamentalmente los de las masivas protestas del 11 de julio], that all the rights of all Cubans are respected and the solution of differences through democratic and peaceful means ”. But its purposes go beyond a simple protest demonstration, as the Archipelago leader acknowledged in an interview with the Efe agency. According to García, what is intended is “to shake a country, make people aware, generate a debate that causes changes.”

In the Reuters photo, pro-government protesters gather at the doors of the dissident Yunior García’s house in Havana (Cuba) this Saturday. 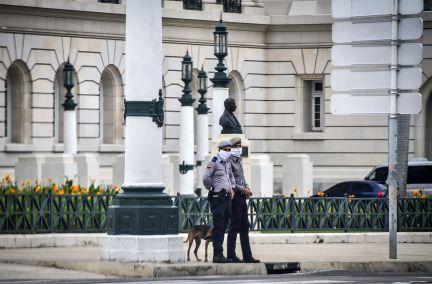 The day in which the Cuban opposition will demonstrate in the streets has begun with the presence of the police in various parts of Havana. In a letter published on Sunday, some 40 civil organizations in Cuba and abroad warned of a “wave of repression that has intensified in the country against its promoters and the citizens who identify with it.”

In the image, from AFP, police officers around the Capitol in Havana.

See also  What is the Word answer today? Meaning of daily word 276 for Tuesday 22 March and how to play the game